Schools face losing hundreds of teaching posts due to dispute 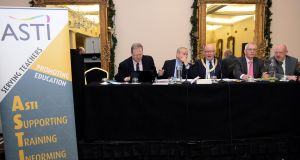 In addition, thousands of these teachers face the prospect of working up to eight hours longer over the school year to make up for lost tuition time.

The warnings are contained in new circulars which are being issued to all schools this week by the department.

The move puts the Association of Secondary Teachers Ireland (ASTI) in a difficult position, given that it has directed its members not to attend any of these collaboration meetings.

These meetings are aimed at providing an opportunity for subject teachers to share and discuss samples of their students’ work and achieve consistency in grading.

Most full-time teachers who teach two subjects would be expected to attend up to eight hours of these meetings over the course of a school year.

However, secondary school managers say the ASTI’s stance is resulting in a “staggering” loss of tuition hours for pupils and is putting schools in an “impossible position”.

The Teachers’ Union of Ireland (TUI), by contrast, is permitting its members to attend these Slar meetings outside normal teaching hours.

The new department circular gives teachers a number of options for holding Slar meetings in a way that does not impact on student tuition time.

In cases where they take place during normal school tuition time, paid substitutes will be provided.

However, teachers will lose an equivalent amount of “professional time” and the overall teacher allocation to the school will be reduced.

Well-placed education sources say this could lead to a reduction of up to 260 full-time teaching posts across voluntary secondary schools, which are mostly staffed by members of the ASTI.

A circular being issued to schools on Thursday will state that schools must confirm what option they intend to avail of for holding Slar meetings by March 16th.

Sources say the ASTI’s standing committee has decided to maintain its stance and will continue to direct its members not to attend Slar meetings outside of the normal school day.

The union claims the practice of holding meetings outside teaching hours is contrary to a 2015 agreement with the Government on junior cycle reforms. The TUI, however, does not take this view.

To facilitate teachers engaging in Slar meetings and other curriculum changes, the department has provided secondary teachers with “professional time”.

This is a reference to the 40 minutes a week – or 22 hours a year – of non-teaching time given to teachers involved in delivering the junior cycle.

This professional time has been facilitated by the department by hiring almost 700 additional teachers.

The department is understood to be taking a hardline stance on cutting teacher allocations on the basis that it will not “pay on the double” by hiring additional staff and using paid-for substitution to cover Slar meetings.

Rescue operation underway in Limerick after man 'gets stuck' on roof

‘We are all in this together’- Jim Woulfe, Dairygold CEO

Politics of a pandemic: How Covid-19 changes could open doors to a better Ireland

Donegal singer aims to drum up funds for ChefAid Donegal

Orla up for top radio award as she finalises BBC documentary

Coronavirus: Is insufficient testing a big weakness in our attack?

Critical care may not be directly delivered by ICU medics if cases surge, doctor warns

Coronavirus craft: ‘The virus is so beautiful and so sinister’

Rise in temperatures unlikely to kill off coronavirus

Three chances to be given for breaching coronavirus restrictions this weekend

Three chances to be given for breaching coronavirus restrictions

Biden should pick NY Governor Andrew Cuomo as his VP

Quiz: How well do you know your biblical figures?

Impact of coronavirus ‘overwhelming’ in Republic but for public-health controls

Impact of coronavirus ‘overwhelming’ but for public-health controls in Republic

A friend recommends: Cork's Saoirse Noonan on 'Cheer' and 'The Power of Vulnerability'

Your evening longread: The story of Phil Ochs, the folk singer who could've been as big as Bob Dylan

An ode to Bernie Sanders - the people's champion

28 more deaths from Covid-19 in Republic

BREAKING: 13 more confirmed cases of Covid-19 in Limerick as death toll in Ireland rises to 6,574

BREAKING: 13 more confirmed cases of Covid-19 in Limerick as death toll in Ireland rises to 263

'I want teams across the nation to see the senior Irish team and say, 'That's the way we want to play'

Tips for using face masks: Number one, don't dump them on the ground

Covid-19: Four more NI deaths as public told crisis is ‘not a holiday’