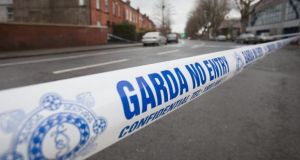 The CSO recidivism study shows 55 per cent of all prisoners released from jail in 2014 had re-offended within three years. File photograph: Gareth Chaney/ Collins

Sex offenders are the least likely group of criminals to be convicted for a second time after their release from jail, a major new study on Irish recidivism rates has revealed.

Some 19 per cent of sex offenders who were released from jail in 2014 had re-offended within a three-year period, the lowest figure for any crime type.

The new study by the Central Statistics Office (CSO) also shows that one third of all offenders who avoid a prison sentence, and are instead fined by the courts, have committed more crimes within one year. Most commit the same type of crimes.

The CSO recidivism study shows 55 per cent of all prisoners released from jail in 2014 had re-offended within three years, though that is an improvement on previous trends.

Of those prisoners who were released from jail in 2011, for example, some 64 per cent had re-offended within three years.

The new study also reveals a number of other trends in rates of re-offending in the Republic, including:

* In 2014 the vast majority of prisoners, at 93 per cent, released from jails in the Republic were male.

* Female offenders released in 2014 were slightly more likely to re-offended within three years than males released from prison in the same year, with 58 per cent of female prisoners re-offending compared to 55 per cent of men.

While sex offenders were the least likely to be convicted for new offences within three years of release from jail, those convicted of “damage of property or the environment” were most likely to have re-offended; some 79 per cent of that group re-offended in the three-year period after their release in 2014.

Rates of re-offending within three years of release from jail differed for those convicted of different crime types. For public order offences, the rate was 76 per cent; for burglary, 70 per cent; theft, 68 per cent; kidnapping and related offences, 67 per cent.

The study by the CSO has been carried out by using information from the Irish Prison Service and also from the Garda’s computerised database PULSE. Like all crime-related data, the study’s results have been published “under reservation” which means the CSO was still working with the Garda in a bid to improve the way the force records information about crimes.

The CSO said this publication released on Wednesday “introduces a shorter time period over which to measure re-offending (one-year rate) to aid with a more timely understanding of re-offending in Ireland”.

Joau mariou is Interesting to Betis and Galatasaray. Inter are ready to sell the midfielder
Real Madrid defender Nacho is Interesting for Milan, Napoli and Roma
Dest will arrive in Barcelona today. Blaugrana has agreed a contract with him and will pay Ajax 20+5 million euros
Suarez leaving Barcelona for Atletico Madrid. Luiz was called by Simeone, their Union should be 🔥
Barcelona announced Suarez's move to Atletico
Barcelona will receive 2 million euros for the transfer of Suarez in the seasons when Atletico reaches the 1/4 finals of the Champions League
Chelsea's newcomers came off in the League Cup: Havertz scored a hat-trick (the first of his career), Chilwell an assist, Silva played an hour
Source https://www.irishtimes.com/news/crime-and-law/sex-offenders-are-least-likely-criminals-to-be-convicted-again-after-jail-release-1.4322730

Downing Street moves to give spies licence to commit crimes

Biden leads Trump among Catholic voters, according to new poll

Eric Trump must testify in probe into his family's businesses next month in New York, judge rules

One winner of Lotto jackpot worth over €5.3m

Someone has just won €5.4 million on tonight's Lotto jackpot

The show must go on! Donegal company boosted by socially distanced festival

Weather warnings issued ahead of gales and rough sea conditions

Another 15 pubs found in breach of Covid-19 restrictions

Man being questioned about Limerick shooting remains in custody

'An awful lot of young people might have to die' if we were to pursue herd immunity strategy, Prof Nolan says

French vessel, believed to have been fishing in Irish waters, detained by Naval Service

Man who denies stabbing man with cerebral palsy to death was 'caring' and 'friendly' towards deceased, court hears

Coronavirus: Two deaths and 234 new cases confirmed in Ireland - including 103 in Dublin

‘Cycling is not just for Dublin’: New transport campaign for rural Ireland is launched

'How are we supposed to be on par with the men's game?' - Two county finals in 26 hours for 16 players

Woman paralysed after car crashed into her during school run, settles case

Fire services respond after HGV overturns on N4 in Dublin

Coronavirus sniffer dogs get to work at Helsinki Airport

Limerick Property Watch: Your new holiday home by the sea

Man accused of murder was friendly and caring towards deceased, court told

Debunked: No, Smyths Toys is not closing its doors and going 'online only' in the run up to Christmas

One half of legendary WWE tag team dies