WITH CLUB ACTION back in full swing across the length and breadth of the country over the Bank Holiday weekend, one story in particular caught the eye.

There were incredible wins, heartbreaking losses, gut-wrenching injuries and what not else experienced by each and every Gaelic football and hurling club team on these shores.

But one story put all of that into perspective. 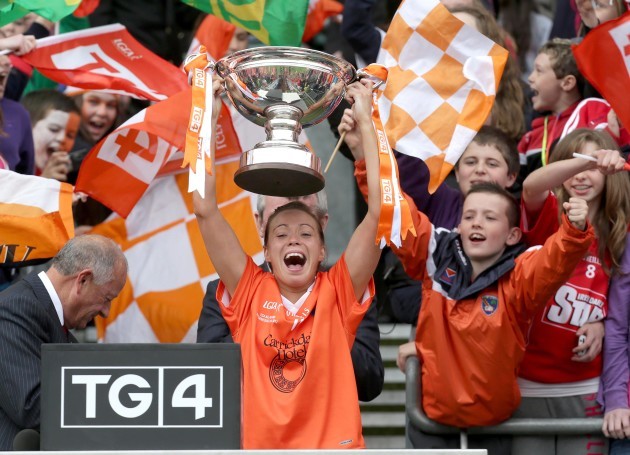 What a role model for all women.

Great to see Mags Carville (McAlinden) back in playing action after overcoming her battle with cancer.

Great hope for all those going through hard times.

Mags McAlinden, as she’s better known in football circles in Armagh and further afield, captained the Orchard county to All-Ireland intermediate glory in 2012.

After overcoming a battle with cancer, the veteran forward made her comeback for her beloved club, Clann Eireann, on Saturday. While McAlinden was on the winning side as the Lurgan outfit and reigning league champions left Dromahill with a 3-6 to 2-4 win, it was about much more than that. 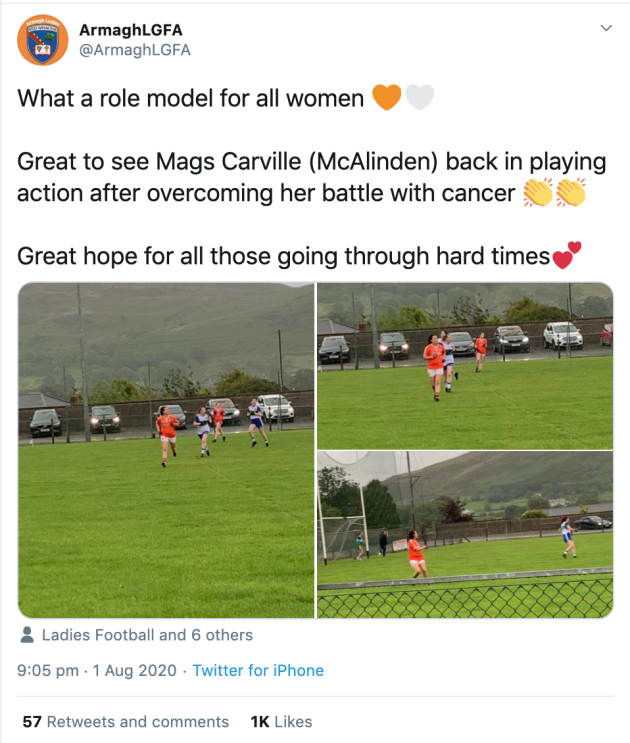 “From day one when Mags got that news, it was positive the whole way round,” her former county team-mate, current Armagh LGFA chairperson and good friend Sinead Reel tells The42. “She was fighting this from the start.

“To see her coming back on the field last week, it was brilliant. It was just pure chance that I went. I just said to myself, ‘I’ll go and watch a game tonight somewhere’ and I ended up going to watch that game. I didn’t know Mags was even there or coming back.

“At the end of the match, they gave her a big round of applause and it was all emotional between all of them.

“One of Mags’ mentors was Marie Hoey — she would have been their coach — and Marie passed away from breast cancer at a very young age when they were all younger.

It was just the whole emotion of all of that as well, bringing back the memories of Marie in Clann Eireann — a great character, who I would have worked alongside in Armagh too many years ago. All of that and Mags’ own battle.”

The bravery McAlinden has shown of late, and the way she successfully fought her battle, was no surprise to Reel, and to many others who know her on and off the pitch.

And after 14 seasons in the Armagh jersey before she finished playing inter-county football in 2015 and glittering success with her club, there was no doubt that she was going to return to her beloved sport. 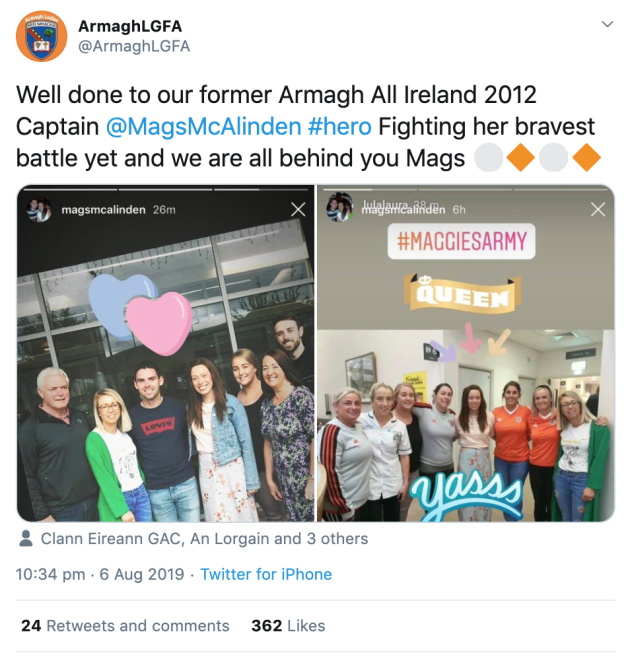 “Look, you nearly would have guessed she was going to come back because she just has that type of attitude: never quit, never stop, that never say die attitude,” Reel continues, recalling several cherished memories.

“Mags obviously played for Armagh for a long, long time. She was our captain for the All-Ireland in 2012. Personally, she’s a great friend as well. My wee girl, funny, was mascot that year and it ended up actually that was the year of the Match for Michaela, Michaela Harte.

Rosena got to run around Casement with Mags as the flagbearer at the Match for Michaela, which was massive for her too. It just shows you what Mags was like, to think of asking her to do that with her. She’s a great girl.”

Recollections from their inter-county days come flooding back, and Reel continues:

Everything she did was done in a quiet manner and that’s probably why she was picked as captain, because she got things done but in a different way back in the day. Obviously her football skill alone stood out, she was one of the best.

“She was one of the best forwards that we had for Armagh for many a day.”

The daughter of former Armagh goalkeeper and joint-manager Brian McAlinden and wife of ex-Orchard footballer, Paul Carville, Mags fought the battle of her life through 2019.

Many fundraisers were organised including a Race for Life 5k to raise money for Cancer Research and a support drive on the weekend of the 2019 All-Ireland ladies football final.

And with everyone across the county of Armagh and further afield behind her, McAlinden pulled through.

“To be fair, she had a massive support in her own club,” Reel notes. “Clann Eireann completely rallied around her; all the kids, all the girls that played her, previous players and current players all rallied around.

Then our own county girls as well. At the time, there were t-shirts and everything just to show that we were there and we were all with her the whole way through the battle. Obviously then she has a great husband and her wee one as well.”

And now, it’s all about spreading the story to give others hope. Both the Facebook post and tweet have attracted huge viewing figures and have been shared far and wide since they were posted on Saturday night and her former team-mate feels that’s hugely important.

“She deserves the recognition. I’d say it’s probably our most seen social media post in all of our time about one particular person in the whole of Armagh. The amount of people that have contacted me since that want to get talking to Mags as well.

“Mags would speak to anybody on it, probably to give other people hope. That’s the type of character she is. She’s just unbelievable, she’s so passionate as well about the sport and that’s another reason why I knew that she was definitely going to come back in some shape or capacity with her own club in Clann Eireann.

“The amount of clubs and counties that have shared it on social media, it’s probably just to give other people hope, to say, ‘If this girl can do this, we all have to rally around and get people involved in our sports.’”

“Another wee girl from Tyrone, her story came out today,” Reel concludes, with a nod to Edendork and Tyrone youngster Laura Mc Caffrey.

“These stories give other people and other, in particular, women and females involved in our sport, hope. I think it’s brilliant for people to say, ‘Let’s fight this. Don’t lie down.’

“I do believe that never say die attitude comes from playing sport as well. I think these two stories will work wonders with people to get them through the rough times.

“As Mags says, there was hard days and there’s days you think, ‘God is it ever going to end,’ but she definitely battled through it all and came out the other side, thank God.”

Giggs on bale at Tottenham: Now we can see him play every week
Tottenham loan Vinicius from Benfica. He was the top scorer last season in Portugal
Hudson-Audrey wants to move to Bayern. The club has been trying to sign him since January 2019
Neuer on winning the German super Cup: scoring 3 goals is always impossible. Fortunately, Kimmich scored
Vasin's agent that the ex-coach of Khimki Gunko refused the player: I don't know anything about it. Maybe he was offered a taxi driver
Shomurodov will sign a 4-year contract with Genoa. Medical check - up-on Friday
Vinicius was offside, but the ball was last touched by a Valladolid defender. Ex-referee Andujar Oliver on Real Madrid's goal
Source https://www.the42.ie/mags-mcalinden-carville-cancer-gaelic-football-comeback-armagh-5167218-Aug2020/