Dubliner spent much of his life seeking justice for his brother Robert (17), who died in nightclub blaze 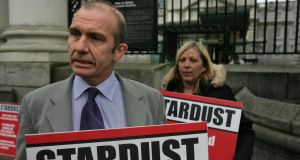 A file photograph of Eugene Kelly, a long-time campaigner for the victims of the 1981 Stardust fire disaster, who has died suddenly aged 62. Photograph: Matt Kavanagh/The Irish Times.

The funeral takes place on Tuesday of Eugene Kelly (62), long-time campaigner for the victims of the 1981 Stardust disaster.

His brother, Robert (17), died in the fire at the Dublin nightclub along with 47 other young people in the early hours of the February 14th, 1981.

Mr Kelly died suddenly at his home in Balbriggan on Wednesday. He was among the families who gathered at Dublin Coroner’s Court a week earlier for the preliminary hearing of 48 new inquests which are to be held early next year.

The inquests were ordered last year by the then attorney general Séamus Woulfe.

Mr Kelly had campaigned almost all his adult life for an inquiry that might bring answers to the families as to how and why their loved ones died.

Speaking outside the court on October 14th, he said: “Robert’s 17, he was. Now I read my brother’s coroners report and there was nothing left of him. Those people who perished in that fire deserve justice.

Antoinette Keegan, who spearheaded the Stardust families’ campaign with her late mother Christine, said Mr Kelly had “fought side by side with us right through all the years”.

In an online tribute she said: “Eugene Kelly you came into my family’s life…you stood tall and stood by our Ma, never once did you ever let her down, it’s just so sad today…I swear to my God in heaven, you will never be forgotten and we will get truth and justice.” Christine Keegan died in July.

Mr Keegan is survived by his partner Martha, children Stuart, Mandy and Lyndsey, and grandchildren.

Only Barcelona won all 5 matches in the Champions League group. She will face Juventus in the last round
Chelsea secured 1st place in group E. Lampard led the club to the play-offs for the 2nd time in a row
Manchester United, PSG and RB each have 9 points in group H before the last round of the Champions League
Berg reached the Champions League group at 34 - probably the last one in his life. And I chewed out that very victory for Krasnodar
Ronaldo scored the 750th goal of his career. 450 of them are for real
Chiesa scored for the first time for Juventus-Dynamo Kyiv
Griezmann scored for the first time in 3 consecutive games for Barca. He has 5 goals in his last 7 matches for the club
Source https://www.irishtimes.com/news/social-affairs/stardust-campaigner-eugene-kelly-dies-suddenly-aged-62-1.4391462

Many tourism, hospitality sector businesses ‘teetering on brink’ of collapse

Covid-19: Central Mental Hospital to test all patients and staff as outbreak confirmed

Limerick motorist caught with no insurance for 12th time

Your evening longread: The remarkable life of Shirley Temple

Irish Cement hearing: Limerick plant is being 'left behind' rivals

Another Letterkenny and District Christmas Annual to hit the shelves

Coroners nationwide facing backlog of inquests due to Covid-19 restrictions

First NI Covid-19 vaccinations due to take place next week

Forget history at your peril - homelessness in modern Ireland

2020 among the world’s hottest years as climate crisis continues

Eoghan to reach for the SciFest on global stage

BREAKING: Increase in number of confirmed Covid cases in Limerick

GIVEAWAY: Treat your loved one to the Gift of Castle Grove

‘The state of the planet is broken’: UN’s stark warning on climate change

Tasoiseach: 'There's nothing I would like better right now than a pint in a rural pub in the west of Ireland'

'Only those who have endured it know the unhappiness': Families mark National Missing Persons Day

'There's a few weeks apart': Here's why the UK has approved a vaccine before Ireland and the EU

The Irish Chamber Orchestra to stream three performances in December

ALL roads to be gritted across Donegal as temperatures plunge

National Missing Persons Day: ‘You don’t ever give up hope’

Dealer caught with €4,000 of drugs in chicken feed

New organisation to be a voice for disabled people in Donegal

Galway Garda Chief questioned on use of spit hoods

Donegal gets first SNOW warning of the season

Climate crisis: 2020 set to be ‘one of hottest years’ on record

'There's a couple of 90-year-olds who rang me, they were in tears. They never thought they'd see the day'

TUNE IN: Other Voices returns TODAY with special appearance from Hozier!

LIVE NOW: Other Voices returns with special appearance from Hozier!

TUNE IN: Other Voices returns with live Irish music on Tuesday!