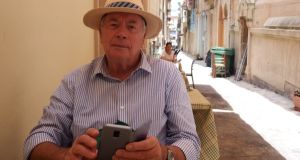 Shaun McCarthy should have flown into Ireland to visit family and friends on Wednesday morning. He should also have been at the weddings of his son and daughter over the weekend but, in the end, everything was postponed.

Originally from Walkinstown in Dublin but now living in Malta, any return trip home seems unlikely for some time to come.

Added to general Covid-19 frustrations, Malta was one of five countries removed from the Irish “green list” from where travellers do not have to self-isolate for two weeks on arrival.

“There is no way I would go now if you had to spend 14 days quarantining,” Mr McCarthy said just a few hours after his Aer Lingus flight would have touched down in Dublin. “My own personal view is that you don’t travel unless you have to.”

Mr McCarthy (77) said he was half expecting the removal of Malta from the list and, following the news on Tuesday evening, it came to pass.

“The general reaction was: there you go. We are not going [home] at the moment,” he said.

“A lot of our members [in Malta’s Irish Emerald Society] would be always going to Ireland, some two or three times a year. I still like to go minimum once a year.”

As an Irishman abroad, he hopes to return home in 2021 instead. On Saturday his son Stephen was due to marry, followed by his daughter Tara on Monday. Both weddings in Manchester were postponed until next summer.

As for life on the Mediterranean island, Mr McCarthy said that while until very recently they felt they had things under control, Covid cases had shot up to more than 200, fuelled by an increase in crowded events.

Asked about the removal of Malta from the green list, the country’s ambassador to Ireland Leonard Sacco said the matter was “a sovereign decision of the Irish Government, which Malta respects”.

Gibraltar, another of the five countries removed from the list alongside Cyprus, Monaco and San Marino, pointed to its low infection rate.

A Gibraltar government spokesman said “currently only four residents are infected. However, it is not currently possible to get from Gibraltar by air to Ireland without going through the UK or Spain, which would require a quarantine anyway”.

Official statistics from the country show a total of 189 confirmed cases of Covid-19 from 22,601 tests, representing a 0.8 per cent positivity rate. Active cases in the country are made up of four residents and two visitors.

Meanwhile, the Irish Travel Agents Association (ITAA) said the removal of the five countries would not have a material effect on the sector as there was little demand for international travel amid low levels of consumer confidence.

It noted that bookings to Malta and Cyprus in particular were “not significant”.

“Although consumer confidence in international travel is expected to remain low for the rest of the year, there is evidence to suggest a large pent-up demand for travel in 2021 which could work to repair some of the damage suffered by the Irish travel industry as a result of the worldwide pandemic,” it said.

Gnabry scored the fastest goal in 18 years in the opening match of the Bundesliga
Manchester United have agreed a 5-year contract with Telles. It remains to be agreed with Porto
Sane made his debut for Bayern
Ronaldo posted a photo with the award for the best scorer from IFFHS: Happy to win 🇵 🇹 🇮 🇹 😀 💪 🏼
Godin will terminate his contract with Inter and move to Cagliari (Fabrizio Romano)
Wolverhampton made red and green uniforms to make the 12 Portuguese players at the club feel good. New level of care 🔴 🟢
Jose Mourinho: I have too many players at Tottenham. I don't like it
Source https://www.irishtimes.com/news/consumer/there-is-no-way-i-would-go-irishman-in-malta-cancels-trip-home-as-two-weddings-put-off-1.4323014

'All of the efforts are to reduce congregation': CMO outlines urgency of fresh Dublin restrictions

Pat Smullen was as a ‘fighter’ who always did his best, funeral service told

Covid-19 Level 3 (plus): Here are the changes that come into force for Dubliners at midnight

Calls for Van Morrison to be stripped of city honour

Up to 50 people can attend weddings in Dublin this weekend, but down to 25 people from Monday

How does moving into Level 3 affect sport in Dublin?

Covid cases in Donegal traced back to house parties

Coronavirus: Three further deaths and 253 new cases - including 116 in Dublin

Debunked: No, the Covid-19 swab test cannot enter the brain and cause damage

UCD moves to Level 4 restrictions, cancels all on-campus activity for the coming week

GAA star McShane fined after driving at 171kph in Donegal

Judge orders gardaí be given material on ‘traumatised, dangerous’ woman

Near miss as runaway bus smashes into Letterkenny car park

'No evidence this will work': Dublin businesses say knee jerk decision on indoor dining will result in a severe blow to the capital

Larkin and McDonnell out as Frankeen ‘Pacts’ punch!

Culture Night: Highlights from the North and border counties

‘The problem is households’ - Restaurants shocked at hospitality ‘lockdown’

Hospitality sector is being made ‘pay for the sins of others’

Covid-19 will ‘spiral out of control’ if we don’t stop people mixing in Dublin’s bars and restaurants, says NPHET expert

Man charged following seizure of over €600k worth of drugs

Sean O'Casey, author of The Plough and the Stars, dies on this day in 1964