Thinking Anew – The light of Christ will not be dimmed 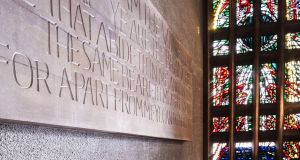 We live in challenging times. The uncertainties hanging over our hopes and expectations for Christmas are difficult for many to manage. However, it is one thing to be disappointed about a postponed family gathering; it is another matter for those who have lost loved ones or who are seriously ill or jobless because of Covid-19. A time to think beyond self.

For decades we have, for the most part, enjoyed orderly lives and we don’t find it easy to cope with disruption.

My parents’ generation lived through two world wars, the flu pandemic, the War of Independence, Civil War and the Wall Street crash. They had no illusions about “the changes and chances of this fleeting world”.

Uncertainty, which was their norm, is the theme of tomorrow’s readings for Advent Sunday.

The prophet Isaiah (Ch. 64) speaks of a world of uncertainty in which people suffer. Appeals to God to intervene fail because, we are told, humankind has brought the suffering on itself; we live with the consequences of our collective moral and political failures.

That often unrecognised connection between conduct and consequence is a blind spot in human nature and when they collide, as for example in the politicisation of the Covid-19 disease in the US, innocent people suffer and die.

The reading from St Mark’s Gospel (Ch 13) is also about uncertainty.

The disciples are warned in language no one wants to hear of the possibility of the end of the world as they know it: “But in those days, after that suffering, the sun will be darkened, and the moon will not give its light, and the stars will be falling from heaven, and the powers in the heavens will be shaken.”

They had previously been told not to cling to the temple and its traditions because the future will not be found in the past or the familiar, a lesson for all of us. Yet they are encouraged, despite current difficulties, to look to the future with hope, believing the future is in God’s hands.

That is precisely what a young soldier thought in the summer of 1944.

Basil Spence had landed on D-Day and as his unit advanced through France he was appalled at the destruction of people’s homes and villages. A fellow soldier asked him what he would do when peace came. Standing among the ruins, Spence, a qualified architect, said he planned to build a cathedral. He had a vision which, said Jonathan Swift, is the art of seeing things invisible.

The city of Coventry and its 14th-century cathedral had been destroyed by bombs in November 1940.

When it happened, the provost directed that the words of Jesus “Father forgive them” should be engraved in the ruined sanctuary but then changed his mind and said that it should read simply “Father forgive”, an acknowledgement that responsibility did not lie solely with the German people. In 1962 a new Coventry cathedral was consecrated. The architect was Basil Spence, the D-Day veteran with a vision.

A window in the cathedral portrays Jesus as light breaking into the world.

While the periphery of the stained-glass window is dark, the central figure, Jesus, is portrayed in clear, dazzling stained glass while the darkness around the edges remains.

Advent prepares us to come to terms with the uncertainties of life for uncertainty is buried deep in what we call the incarnation, the reality of God in human flesh. While the incarnation is a concrete event (the birth of Jesus), there are within it uncertainties that have to be faced: life and death, joy and sorrow, heaven and earth; these inseparable realities are part of life. God did not enter the human experience in a sealed vacuum but rather in the web of human relationships where we are assured that love is for real, even when we are apart.

Atletico President: We always knew that Suarez is the best center forward in Europe
Mourinho on Bale: Playing time is not given, it must be earned
Until recently, Leo posed with Bartomeu and accepted millions, but then Barcelona broke down. Why?
West Ham have offered 33 million euros for En-Nasiriyah. Sevilla refused
Gattuso on 1:3 with Verona: You can't play like this if Napoli want to return to the Champions League
Sobolev on Tedesco in Spartak: Perhaps we will finish the season well, and he will want to stay
Liverpool are close to the transfer of England U16 striker Gordon for 1+ million pounds
Source https://www.irishtimes.com/news/social-affairs/religion-and-beliefs/thinking-anew-the-light-of-christ-will-not-be-dimmed-1.4420723

Trump impeachment article to be sent to US Senate today

Portugal reelects TV-pundit as president, after people brave the pandemic to vote

Ardara turn to Damian Devaney for 2021

Opinion: Is the Brexit war over or has it just begun - what now for the Union?

Permission refused for proposed of mast in Castlefin

Three-quarters of people say they will take Covid-19 vaccine

Covid-19: How are other EU countries dealing with schools?

Special needs school closures: ‘I thought they thought more of my child’

Infant burials likely to have happened at Bessborough, report finds

'It was like a jail': What should become of Ireland's last Magdalene Laundry?

Traveller who tried to book hotel wedding awarded €15,000 for discrimination

New building for Greystones school operating out of tennis clubhouse

Quiz: How well do you know these famous Irish Americans?

Drinks to your door from one of Limerick's oldest bars

Update: Man due in court after Garda car rammed in Donegal

Opinion: This Covid lockdown is particularly hard, so it's important to mind your mental health

Covid-19: Garda checkpoints underway in and around Dublin Airport

'We must end this uncivil war': The week in quotes

Shebeen shut down at industrial premises in Swords

Kremlin accuses US of meddling after 3,500 protesters detained

Contingency talks over Leaving Cert with schools to stay shut

More than £15,000 in fines handed out following illegal rave in east London

Coronavirus: More than 100,000 have contracted virus in North

Man arrested after gardaí seize cocaine worth €245,000 in Limerick

Churches in North extend restrictions on public worship until March

Most children may not return to classroom until close to Easter

‘Pipeline’ of Covid-19 patients into ICU a challenge for hospitals, says HSE chief

Biden administration to continue restrictions on travel to US from Ireland

Confidence in Nkencho shooting investigation ‘needs to be restored’

Man to appear in court after gardaí seize €130,000 of cannabis from growhouse

'People probably think we're a bit obsessed. Sometimes you have to be'