'This is an appalling situation': Judge furious by delays in Miami Showband legal case

A BELFAST JUDGE has said he is appalled by delays to an eight-year-old legal case involving the Miami Showband ambush.

He gave lawyers a fortnight to sort out issues surrounding disclosure of sensitive security documents to a relative of one victim.

Three members of the band were shot dead by loyalist paramilitaries after a concert in Banbridge, Co Down, in July 1975.

Belfast High Court judge Mr Justice Paul Maguire said: “This is an appalling situation where this case has been going on from 2012.

“We are at a stage in 2020 where an obligation to make discovery within the police force has not been complied with. It does make me angry because it shows so much disrespect to the court.”

The band’s lead singer Fran O’Toole, trumpeter Brian McCoy and guitarist Tony Geraghty were killed after their minibus was flagged down by members of the Ulster Defence Regiment (UDR) north of Newry, early in the morning while returning to the Republic from a gig.

Two other band members, Des McAlea and Stephen Travers, were injured but survived.

Donal Sayers, barrister for the O’Toole family taking the action, clarified that the PSNI had complied with its general duty to disclose material.

The judge queried whether an order, signed by an armed forces minister and preventing full disclosure in case it revealed sensitive security information, could apply to PSNI material.

Justice Maguire added: “I just find this incredibly frustrating. This obligation of discovery has not been attended to properly by the police.”

He acknowledged security forces’ concerns, saying: “They may well feel that they don’t wish to have paramilitary organisations gaining access to material that would explain the way they go about their business.”

In 2011, a report by the Historical Enquiries Team (HET) raised collusion concerns around the involvement of an alleged RUC Special Branch agent.

It found that now-dead UVF commander and suspected police mole Robin “the Jackal” Jackson had been connected to one of the murder weapons by fingerprint analysis, the lawyer told the court. 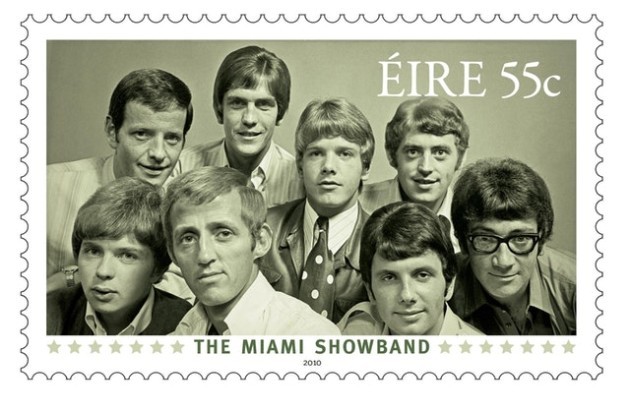 A stamp commemorating the Miami Showband Source: An Post/PA

Sayers said: “It is clear that the issue of subversion within the UDR was debated at a high level.”

He said issues with how Jackson was dealt with by police on discovery of the pistol caused concern to the HET in 2012.

Sayers added: “It is notable that they said that the HET accepts from the outset that collusion is established by the involvement of UDR people and access to UDR equipment.

“I ask you to order that the bundle of Public Interest Immunity (PII) material be disclosed to the plaintiff with the appropriate redactions.”

Kevin Rooney QC, for the security forces, has recently been assigned to the matter.

He said: “There was a huge amount of work involved in providing discovery. The documentation is voluminous.”

He added that the outstanding documents were almost ready: “The police can have that done by the end of next week, perhaps sooner than that.”

Donegal man jailed for 7 years for raping woman in field

Placing of children in adult psychiatric unit in Limerick ‘unacceptable’

Public meeting this evening on flooding in East Galway

Coronavirus: Myths that have gained traction

The who’s who in the Patricia O’Connor murder case

FG's Kate O'Connell and Catherine Byrne lose out on Seanad nomination, but FF women TDs get the nod

Limerick on the Up: Pathway to forming a new brand

'I'm well used to the criticism, I've had it for my whole career... keep it coming'

HSE says it has three websites for latest information on coronavirus

Go ahead for new restaurant and guest house in the city

Murder in a crowded house: The full story of the Patricia O’Connor trial

Man charged in connection with murder of Keane Mulready-Woods

Covid-19 case on the island of Ireland: Here are the main points you need to know

Disposable income on the rise for Galway residents

New York City's St. Patrick’s Day parade is no place for my child

Poll: Should schools using tablet devices scrap them in favour of textbooks?

Limerick On The Up: The future of learning in UL

St. Patrick’s Day memories of a picnic in a 1960s storm in Ireland