IN 2003, JOHN Hume – politician, peacemaker and one of the founders of Derry Credit Union – told the Bienniel Delegate Meeting of the Irish League of Credit Unions about the obstacles he faced when setting up Northern Ireland’s first credit union.

“I will never forget when it began away back in 1960 in Derry, the same year that the Credit Union League itself began. At our first meeting I was 23 years old and giving a talk on this great new idea to get it started,” he said.

“The audience laughed at me and said ‘You’re a mad young fella, nobody will pay you back’. Four agreed with me and I said ‘Empty your pockets.’ They emptied their pockets in a place called the Roswell Hall and we had five pounds one shilling and nine pence.”

While it is John’s tireless and selfless work in helping to bring about peace in Northern Ireland that will dominate most news stories in the coming days, his achievements in helping to establish and promote the credit union movement in Ireland cannot be overstated.

At the age of 23, John Hume was a founder member of Derry Credit Union. He saw how people from a working class background couldn’t borrow from banks and when they needed access to money for rearing their children or for normal day-to-day expenditure, their only choice was to go to loan sharks or pawn shops.

The credit union grew rapidly and immediately established a foothold in the city. Today, Derry Credit Union is the largest credit union in Northern Ireland, with over 31,000 members and assets in excess of £97 million (€107 million). 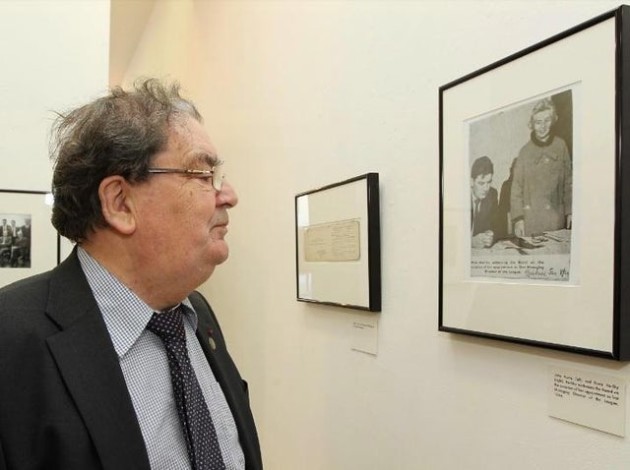 John Human at an ILCU Archive event in 2011. Source: ILCU

John served as President for a period of five years and worked tirelessly in promoting and developing credit unions throughout the island, playing a key role in the establishment and growth of the movement. He was also instrumental in developing international links for the growing Irish movement, particularly with the World Council of Credit Unions.

At a time when other financial institutions put stakeholder profit over the needs of their customers, it is heartening that the credit union movement continues to put people first. The movement is truly fulfilling the social vision which John Hume and his peers mapped out over 60 years ago.

In an interview a number of years ago, John outlined his pride in helping to establish credit unions in Ireland:

Of all the things I’ve been doing, it’s the thing I’m proudest of because no movement has done more good for the people of Ireland, north and south, than the credit union movement.

The ethos of a grassroots, cooperative organisation, owned by members for members, is central to the credit union movement founded by John Hume and his colleagues. This ethos, as it was in 1960s Derry, is more relevant than ever in a post-Covid world. Credit unions support the communities they are embedded in, as they have always done, but with renewed vigour and sense of purpose.

John Hume’s sense of social justice, compassion for ordinary people, and his belief in the strength of the cooperative movement as a means of socio-economic development was, and is, an inspiration to everyone involved in the credit union movement on the island of Ireland today.

He will be sadly missed by all who knew him but his legacy will endure through the peace he created on this island and the thriving credit union movement he helped build.

Gerry Thompson is the president of the Irish League of Credit Unions.

Pep about 3:1 with Wolverhampton: Sometimes Manchester City enter the season quickly, sometimes they don't. We played well
Kevin de Bruyne: Wolverhampton have caused Manchester City problems before. I am glad that we played well
Stefano Pioli: Milan are confident, can grit their teeth and fight. Zlatan proves that he is a champion
Ibrahimovic on the Bologna double: If I was 20 years younger, I would have scored a couple more. But I'm not old
Cavani's entourage and Atletico discussed a two-year contract at a hotel meeting
Abramovich is suspected of secretly investing in players of other clubs
Ibrahimovic has scored 23 consecutive seasons at club level
Source https://www.thejournal.ie/readme/john-hume-credit-unions-5168070-Aug2020/

‘Take some time to consider the path you want to take’

Safer to meet ‘200 friends in a field’ than 20 indoors, says expert

Taoiseach: Changes allowing people to do some work without losing PUP could form part of Budget

Twitter continues to be ‘toxic’ for women, Amnesty International says

Lost generation? Meet the students graduating into the Covid-19 recession

I find it hard to learn online. How will I survive in college this year?

Quiz: How well do you know these Emmy award-winning TV shows?

Mother and son fined €6.2m over failure to clean up illegal farm dumps

Theresa May insists she will not vote for controversial Brexit legislation

Your evening longread: The sold-out flight that goes... nowhere

Man About Town: You should go to Specsavers! - Patrick McLoughney