CAMPAIGN GROUPS IN the UK have vowed to keep fighting after losing a High Court bid to block the Government’s plan to send migrants to Rwanda as Priti Patel welcomed the ruling.

The High Court’s decision has now paved the way for the first flight to go ahead on Tuesday.

Up to 130 people had been notified they could be removed with 31 people due on Tuesday’s flight, the court previously heard.

Lawyers for almost 100 migrants had submitted legal challenges asking to stay in the UK with the remaining anticipated to follow suit.

The first stage of action was brought today  by lawyers on behalf of two migrants alongside the Public and Commercial Services union (PCS), which represents more than 80% of Border Force staff, as well as groups Care4Calais and Detention Action who are challenging the policy on behalf of everyone affected.

Priti Patel welcomed the ruling, saying the British Government will “now continue to deliver on progressing our world-leading Migration Partnership”.

She said: “People will continue to try and prevent their relocation through legal challenges and last-minute claims, but we will not be deterred in breaking the deadly people smuggling trade and ultimately saving lives.

“Rwanda is a safe country and has previously been recognised for providing a safe haven for refugees – we will continue preparations for the first flight to Rwanda, alongside the range of other measures intended to reduce small boat crossings.”

Shortly after his ruling, Mr Justice Swift granted the claimants permission to appeal, suggesting Court of Appeal judges would hear the case on Monday. 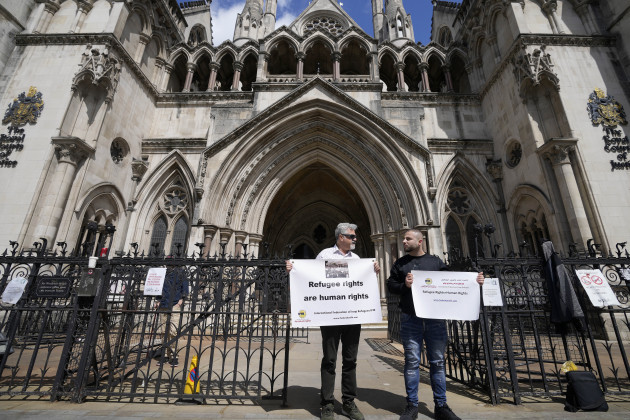 Protestors stand outside The Royal Court of Justice in London. Source: Frank Augstein

Campaigners said they were “disappointed” and “deeply concerned” for the welfare of those due to be sent to Rwanda but added that they would appeal against the decision in court on Monday.

After the ruling, the PCS union also tweeted that it “has called for urgent talks with home secretary Priti Patel on her Rwanda removal policy following a High Court ruling today”.

Clare Moseley, founder of Care4Calais said: “We have been granted permission to appeal on Monday as we are deeply concerned for the welfare of people who may be forcibly deported to Rwanda, a fate that could profoundly harm their mental health and future.”

Moseley said that because of the legal action, six refugees had their directions to be sent to Rwanda cancelled.

“This shows how important it is that no one is deported until the lawfulness of the policy is fully examined,” she said.

“Today was just the beginning of this legal challenge. We believe that the next stage of legal proceedings may bring an end to this utterly barbaric plan.”

They are at risk of being deported by a policy that may ultimately be found to be unlawful. We are therefore considering an urgent appeal.
This is an extremely disappointing outcome and we are deeply concerned for the welfare of the people who may be forcibly deported to Rwanda.

Meanwhile, Detention Action tweeted: “We will be making an urgent application to the Court of Appeal. This is only the first step in our legal challenge, made stronger by today’s evidence.”

On Twitter, Asylum Aid said: “The truncated timeframes are unlawful and unfair, and this argument still has to be heard.”

“This cartoon villain nonsense will now open up a hugely lucrative and far more dangerous trafficking route from Rwanda. Witless *and* immoral. Quite an achievement…”

Sonya Sceats, chief executive at Freedom from Torture, said, “We are disappointed that the court did not grant this injunction to ensure that nobody is sent to Rwanda before Boris Johnson’s cruel policy can be subjected to proper legal scrutiny.

“But the fight is far from over. Caring people across Britain are incensed that this government wants to send people seeking safety halfway across the world and are taking action.”

Meanwhile, Enver Soloman, CEO of the Refugee Council, said the Government’s plans to push on with the plans despite these legal challenges is “extremely worrying”.

“Government claims that this deal would act as a deterrent to end the model of people-traffickers, have already been disproven with the numbers of people travelling across the Channel since the announcement was made almost doubling on the same time last year.

He added: “The Government must reflect on the initial failures of this plan, and rethink by looking to operating an orderly, humane, and fair asylum system.”

In a Twitter post after the ruling, Shadow Home Secretary Yvette Cooper said that the UN Human Rights Council’s criticisms of the Rwanda scheme are “damning”, adding that it is “warning about lack of proper treatment for refugees in Rwanda & accusing Home Secretary of misleading people over UN support.

“This plan is unworkable, unethical, extortionately expensive, and profoundly un-British,” she said.