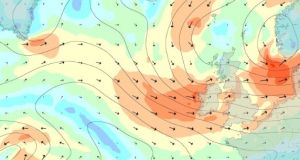 Met Éireann has issued a weather advisory for the weekend due to “unseasonably windy” weather from Saturday night.

The advisory, which forecasts strong and gusty westerly winds at times, will come into effect from 9pm on Saturday and will remain until 8pm on Sunday.

The national forecaster has also issued a blight warning, with weather conditions conducive to the spread of blight becoming more widespread over the weekend.

A status yellow marine gale warning is also in place, with southwest winds expected to reach gale force 8 on Irish coastal waters from Loop Head to Bloody Foreland to Howth Head and on the Irish Sea.

Elsewhere, the UK Met Office issued a wind warning for counties Antrim and Derry for the weekend. This status yellow warning is in effect from midnight on Sunday until 4pm that day.

In terms of the national outlook for the weekend, Met Éireann said Saturday will begin mostly cloudy and misty, with further outbreaks of rain and drizzle during the day.

These outbreaks will give way to a spell of persistent rain in the north and west by Saturday evening, with maximum temperatures during the day of between 15 and 20 degrees.

Saturday night will see strong winds and gales developing on coasts. Outbreaks of rain overnight will push eastwards, with some heavy falls in Atlantic coastal counties. Minimum temperatures overnight will be between 9 and 11 degrees.

Sunday will be an unseasonably windy day with a mix of sunny spells and blustery showers. The showers will be heaviest and most frequent in Connacht, Ulster and west Munster, with some thundery downpours possible.

Maximum temperatures during the day will be between 13 and 17 degrees, with the coolest weather in Atlantic coastal areas.

On Sunday night, showers will become more or less confined to Ulster and north Connacht and along the Atlantic coasts, with mainly dry and clear conditions developing elsewhere.

Lowest temperatures of between 9 and 11 degrees are forecasted during the night.

Showers will likely persist in Ulster and near some Atlantic coasts on Monday, but it will be mainly dry elsewhere with sunny spells.

Most areas will be dry on Monday night with clear spells, just a few light showers near west and northwest coasts and lows of 7 to 10 degrees.

Manchester United presented their away form for the 2020/21 season
Ferdinand on Barca breeding: Bad. They still rely on old-timers
Inter wants Perisic back, even if Conte remains in the team. Bayern hopes to buy the player for less than 20 million euros
Rudi Garcia on Lyon's chances against city: the quarter-Finals showed that the favourites can also be beaten
CSKA agreed a 5-year contract with Fuchs. The transfer is estimated at 7-10 million euros
Ferdinand on Messi at Barca: Will he want to stay, given the results and the team's performance? Does he have time to wait?
I would not be surprised if Pochettino is appointed in less than 3 days. Ex-Barca winger Carrasco on the club's new coach
Source https://www.irishtimes.com/news/ireland/irish-news/unseasonably-windy-weather-set-to-buffet-ireland-1.4296531

'That night is a great memory, it was remarkable we'd all managed to meet a few months before he died'

My week: Best of luck Eugene and enjoy those retirement years - Celia Holman-Lee

Updated: Search called off after ‘shouting’ heard on Errigal Mountain

What insight did we get about the Leaving Cert Calculated Grades after the furore in the UK?

Another Life: Arrival of great skuas may alter seabird balance on Clare Island

Why did hundreds of mackerel wash up on the beach? Readers’ nature queries

Inside the O’Brien Fine Foods factory in lockdown Kildare

Michael Dowling - what real leadership looks like during a pandemic