'We will not be terrorised': Donald Trump attacks protesters and 'cancel culture' at Mount Rushmore

US PRESIDENT DONALD Trump took aim at so-called “cancel culture” during a speech at Mount Rushmore, where he accused protesters pushing for racial justice of engaging in a “merciless campaign to wipe out our history”.

He said: “This movement is openly attacking the legacies of every person on Mount Rushmore.

The speech and fireworks at Mount Rushmore came against the backdrop of the coronavirus pandemic that has killed over 125,000 Americans.

The president flew across the nation to gather a big crowd of supporters, most of them maskless and all of them flouting public health guidelines that recommend not gathering in large groups.

The Trump campaign confirmed during the president’s speech that Kimberly Guilfoyle, a top fundraiser for the campaign and the girlfriend of Trump’s eldest son Donald Trump Jr, had tested positive for the coronavirus while in South Dakota.

Both Guilfoyle and Trump Jr, who serves as top surrogate for the president, are isolating themselves and have cancelled public events, according to Sergio Gor, chief of staff to the Trump campaign’s finance committee.

During the speech, the president announced he was signing an executive order to establish the National Garden of American Heroes, a vast outdoor park that will feature the statues of the “greatest Americans to ever live”.

Amid the campaign headwinds, the president has sharpened his focus on his most ardent base of supporters as concern grows inside his campaign that his poll numbers in the battleground states that will decide the 2020 election are slipping.

In recent weeks, Trump has increasingly lashed out at “left-wing mobs”, used a racist term to refer to the coronavirus and visited the nation’s southern border to spotlight progress on his 2016 campaign promise to build a US-Mexico border wall.

The event, while not a campaign rally, had the feel of one as the friendly crowd greeted Trump with chants of “Four more years!” and cheered enthusiastically as he and first lady Melania Trump took the stage. 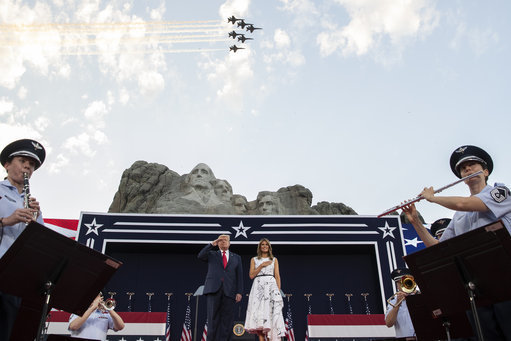 “They think the American people are weak and soft and submissive,” Trump said.

“But no, the American people are strong and proud, and they will not allow our country and all of its values, history and culture to be taken from them.”

Leaders of several Native American tribes in the region raised concerns that the event could lead to virus outbreaks among their members, who they say are particularly vulnerable to Covid-19 because of an underfunded health care system and chronic health conditions.

“The president is putting our tribal members at risk to stage a photo op at one of our most sacred sites,” said Harold Frazier, chairman of the Cheyenne River Sioux Tribe.

Some Native American groups used Trump’s visit to protest the Mount Rushmore memorial itself, pointing out that the Black Hills were taken from the Lakota people.

Detailed analysis of the game of 18-year-old Ronaldo for sporting against Manchester United. 6 days later, Cristiano became a United player
Manchester City are confident that Aguero will stay for another season, despite the Interest of Independiente
Willian agreed a 3-year contract with Arsenal. Salary-100 thousand pounds a week
Sanchez signed a contract with Inter until 2023. The club signed him for free
Arsenal players are against the dismissal of 55 employees of the club. The team took a pay cut to save the staff
We talked to the football player Tsiskaridze: he ate a dragonfly, knows 7 languages, is in shock from Makhachkala, travels the world and is just happy
David Silva is close to moving to Lazio. The club offered the 34-year-old midfielder a 3-year contract with a salary of 3 million euros per year
Source https://www.thejournal.ie/4-july-donald-trump-mount-rushmore-5141295-Jul2020/

The Irish language words and phrases for sex and sexuality

Record entry, but no actual race for 2020 RunDonegal Women’s 5k

Report says sex crime suspects should not be named

One person with Covid-19 receiving treatment at University Hospital Limerick

Poll: Have you been to a cinema since they re-opened?

Relocation homebuyers head to the west

Galway’s original Olympian – a century on

Fitting farewell for a true giant of Irish political life

Opinion: We've waited long enough - we must wipe out nuclear weapons for good

Live album looks after those who make it real

Limerick Weather: Dry, warm and sunny with highs of 21

‘It's dangerous’: How Ireland is behind the curve on home care regulation

Germany is planning to ban spotlights to save its insects

Monaghan to the rescue for Craughwell hurlers

Ten of the best for trainer Mullins at summer festival

How Pavlov’s doggedness led to a breakthrough in psychology

No time limits and no pre-booking: what the unpublished pub reopening guidelines reveal

Could local lockdowns work in Ireland?

We have been intrigued by infinity’s enigma for . . . forever

Department warns about unsolicited seeds being sent by post

‘John Hume came out for us that often, Derry needed to come out for him’

Teenage boy dies after fall at Powerscourt waterfall in Wicklow

Property: Cosy cottage with private cove on the market

Your evening longread: The bizarre plot to capture the Venezuelan president

50 new cases of Covid-19 identified across the country

Opinion: 'Lebanon needs help - or the consequences for the Middle East don't bear thinking about'

Covid-19 resulted in decrease of child welfare referrals to Tusla

The Explainer: Why is Ireland delaying the reopening of pubs again?

Irishman in Malta, due to fly today, postpones visit after green list cut

Irishman in Malta not surprised by green list change

Publicans ‘devastated’ that pubs will not open on August 10th

'The lads who sold out on Ireland': How Zig and Zag's RTÉ exit caused a stir in the 1990s

Coronavirus: No deaths and 50 new cases confirmed in Ireland

Man (23) charged with murder of Patrycja Wyrebek in Newry

WATCH: Limerick publicans react to delay to next phase of loosening Covid-19 lockdown