Will it be safe to reopen schools? Here’s what the experts say 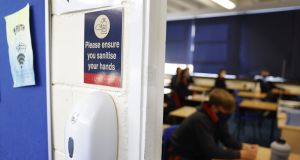 Prof Anthony Staines, who advocates a zero-Covid approach, says there are risks to reopening schools, but a phased approach is more sensible than a ‘big bang’. Photograph: Alan Betson

Your Web Browser may be out of date. If you are using Internet Explorer 9, 10 or 11 our Audio player will not work properly.
For a better experience use Google Chrome, Firefox or Microsoft Edge.

Schools are finally set to reopen on a phased basis to more than a million pupils and teachers.

But how safe will school settings be? Will reopening schools lead to the R rate increasing? Does the UK variant carry a greater threat to children? And how soon could we be talking about closing schools again?

Will it be safe to reopen schools given the level of virus in the community?
“Yes, definitively,” says Prof Philip Nolan, chairman of the Irish Epidemiological Modelling Advisory Group and member of the National Public Health Emergency Team (Nphet). “There are fewer cases now than there were at the peak in October, a period when – thanks to efforts of school principals, teachers, pupils and public health doctors – schools stayed open with very low numbers relative to the general population.”

While the virus is more transmissible, he says we need to remain vigilant and adhere to all infection-control guidelines.

Prof Anthony Staines, a professor in health systems at Dublin City University who advocates a zero-Covid approach, says there are risks to reopening schools, but a phased approach is more sensible than a “big bang”.

Will virus transmission rates increase when schools reopen?
“Probably, yes,” says Prof Staines. “At the moment it is very close to one – just under it – so we don’t have much headroom. Once it rises above that, it tends to feed on itself and can go from a modest to a rapid increase very quickly. That’s not off that cards, but hopefully it won’t happen.”

But Prof Nolan says it is too early to say for sure. “We saw very low levels of transmission in schools from September to December, and we’ll need to wait and see because we’re dealing with a different variant.”

He says he is much more concerned about parents congregating or deciding to go to work because they have more free time. The risk, he says, is that adults relax because the reopening of school suggests the danger has passed.

What kind of case numbers could cause schools to close once again?
“We need to be driven by data,” says Prof Staines. “I think we should be looking at schools regionally, as there are some areas where transmission is much lower than others.”

It is vital, he says, that we do more to manage the Border and have stronger hotel quarantines for inward travel to reduce risks.

Prof Nolan says the focus should be on driving numbers. “We should think about making a success of this and making it our priority to drive cases down further,” he says. “So, we’re not countenancing it going up. Let’s keep up the level of caution we need to keep it going down and then get to the summer, when we hope things will start to look much more different.”

Among adults, there is some evidence to show that it makes people sicker – “not enormously” – while research is continuing on other aspects of the variant.

Ibra will be torn between matches and the festival in Sanremo for a week. 4 musical evenings and 2 matches in 6 days
The champion of China, Jiangsu Sunding, announced the termination of its activities. Inter is owned by the same company
Ex-goalkeeper of the national team of Argentina Cavaliero killed a man
Schalke has sacked head coach Gross and the sports director. The team is last in the Bundesliga
Werner on Chelsea: The period when I didn't score was the worst of my career
Ole Gunnar Solskjaer: You're in the wrong place if you're at Manchester United and you like to lose. I may be the worst loser in the club
Ko vid-masks of the Leopard are recognized as the best in Spain. Efficiency - 94%
Source https://www.irishtimes.com/news/education/will-it-be-safe-to-reopen-schools-here-s-what-the-experts-say-1.4493308

Poll: Have you felt time go slower or faster during the pandemic?

Garda injured during course of arrest at house party in Dublin

Irish hauliers: 'French officials treat us as if we’re coming from England – we’re not'

Man arrested in Limerick in connection with Clare double shooting

Police in Myanmar intensify use of force at anti-coup protests

Irish wedding blessings for a happy couple on their big day

How to make Irish nachos, the perfect "cheat meal"

The Premier League club Ireland might have had: an oral history of the Dublin Dons

From Casablanca to... The Exorcist - our readers on their comfort films

Maeve Higgins: The State cannot say it values migrant workers while it pushes them out the door

Italy's time is nearly up, get South Africa or Argentina into the Six Nations

Explainer: Here's what to know about the changes to Ireland's vaccination queue

Quiz: Can you name these crisps and corn snacks?

'We will bring perpetrators to justice': Anti-lockdown protest condemned after injuries and arrests

Three men charged after seizure of cannabis worth €720,000

Coronavirus: 13 deaths and 738 new cases of Covid-19 confirmed in Ireland

Mark Coyle signs up for fourth season with Finn Harps

Career Guidance with Rory White: What subjects to choose for Leaving Cert?

Electrical waste recycling drops in January after rise in 2020

Gardai helped driver out of ditch before realising he was drunk

Gardai carry out house checks in relation to mandatory self-quarantine

Most popular baby names in Limerick are revealed

Limerick Fashion: Brighter days are just around the corner

Clashes in Dublin as hundreds protest against Covid-19 restrictions