NEW YORK — The New Jersey man accused of stabbing Salman Rushdie told the New York Post in an interview published Wednesday that he was “surprised” the author had survived the attack.

“When I heard he survived, I was surprised, I guess,” Hadi Matar, 24, told the tabloid, which said they held a video interview with the jailed suspect.

The suspected assailant, who has pleaded not guilty to attempted murder charges, did not say whether he was inspired by the 1989 edict, or fatwa, issued under Iran’s former supreme leader Ayatollah Ruhollah Khomeini, that ordered Muslims to kill the writer for what he deemed the blasphemous nature of the book “The Satanic Verses.”

“I respect the ayatollah. I think he’s a great person. That’s as far as I will say about that,” said Matar, who according to the Post was advised by his lawyer not to discuss the issue.

Matar told the paper he had “read a couple pages” of Rushdie’s novel. 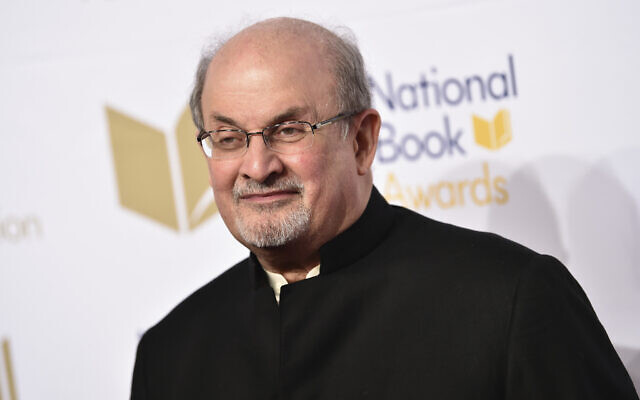 “He’s someone who attacked Islam, he attacked their beliefs, the belief systems.”

Matar said he was not in contact with Iran’s Revolutionary Guard. He said he had learned Rushdie would speak at the Chautauqua Institution’s literary series via a tweet earlier this year.

He told the Post he had taken a bus to Buffalo one day prior to the attack, before taking a Lyft to Chautauqua.

He bought a pass to the Chautauqua Institution grounds and then slept in the grass the night before Rushdie’s planned talk.

“I was hanging around pretty much. Not doing anything in particular, just walking around,” he told the paper. “I was just outside the whole time.”

On Friday, as Rushdie was set to deliver a talk as part of a lecture series, a man stormed the stage and stabbed him several times in the neck and abdomen. 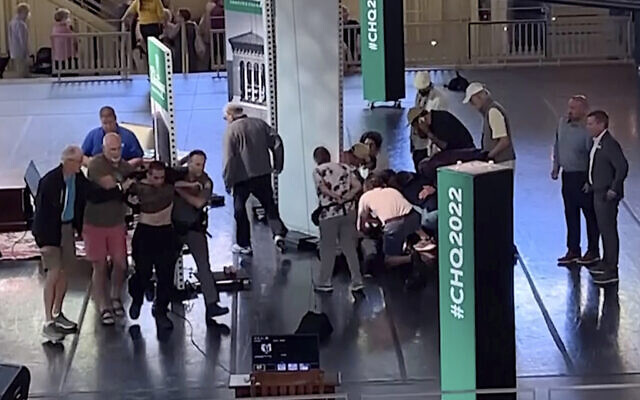 This still image from video shows Hadi Matar, 24, of Fairview, N.J., at left, being escorted from the stage as people tend to author Salman Rushdie, center right, at the Chautauqua Institution, in Chautauqua, N.Y., Friday, Aug. 12, 2022. (AP)

Rushdie was airlifted to a nearby hospital, where he underwent emergency surgery for life-threatening injuries.

The 75-year-old’s condition remains serious but he was taken off a ventilator, and has shown signs of improvement.

Matar told the Post he had watched YouTube videos of Rushdie speaking, and called the author “disingenuous.”

Matar was born in the US but holds dual citizenship in Lebanon, where his parents were born.

On Monday Matar’s mother, Silvana Fardos of Fairview, New Jersey, described him as “a moody introvert” who became increasingly fixated on Islam after visiting Lebanon to see his estranged father, in an interview with Britain’s Daily Mail newspaper.

He is set to appear in court Friday.

The unlikely rise – and remarkable endurance – of Ukraine’s Volodymyr Zelensky

Annexation vote wraps up in Russian-occupied parts of Ukraine

Iran steps up arrests of activists, journalists as crackdown on protests escalates