The silence that hovered over the approximately 100 men, many with children in tow, who were standing in front of the Government Hospital in Beit Jala was suddenly pierced by the cry of a chant leader repeated in chorus. “We will continue the struggle,” they intoned.

The group of 20 or so young Palestinians descending the stairs from the side of the hospital into the front courtyard carried above their heads a small stretcher. Upon it lay a minuscule boy, his lifeless face peering out of the Palestinian flag that enshrouded him.

Rayan Suleiman, 7, died suddenly under disputed circumstances Thursday after Israeli soldiers showed up at his home in the West Bank village of Tuqu’, south of Bethlehem. Relatives say troops who had been chasing stone throwers threatened his family, scaring the otherwise healthy child and causing his demise. The Israeli military describes a milder interaction and protests that the child’s death was unrelated to its actions.

Nonetheless, the incident has served to inflame tensions in the West Bank that were already on the rise due to an Israeli anti-terror offensive in the northern West Bank that has seen nearly nightly raids and deadly gun-battles.

Yellow Fatah flags flapped in the wind as the funeral procession wound its way from the hospital to Tuqu’, trailing an ambulance carrying the small body, and posters put up near the family’s home showed Rayan’s young face alongside the Dome of the Rock and late Palestinian leader Yasser Arafat, lending the rites a nationalist political atmosphere.

Mohammad Suleiman, Rayan’s uncle, told ToI that everyone he has spoken to blames Israel for the child’s death. But beneath the anger visible in the many of the mourners faces, reddened by the intense heat and the exertion of wailing, the prevailing feeling was sadness, he said.

As pallbearers brought Rayan’s body to his Tuqu’ home for the family to bid farewell, over 100 mourners squeezed into a small yard through a narrow passage, consoling the family with religious chants.

Wailing mourners kissed his head and feet, shrouded in a Palestinian flag.

As the mourners made their made their way on foot to a nearby mosque, two elderly women off to the side leaned out of the family home, stretching out their hands to wave goodbye, between wiping tears and sweat from their faces.

At the mosque, the men gathered beneath a tent plastered with photos of Rayan, identifying him as having been “martyred by occupation forces chasing after school children.” 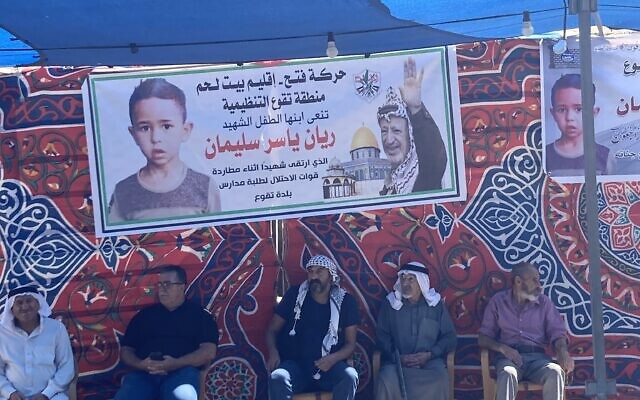 According to the Israeli army, soldiers indeed tracked two youths to the Suleiman home who had been seen throwing stones at Israeli cars. Tuqu’ sits along a road that connects two settlement blocs south of Jerusalem, and troops are regularly stationed nearby to dissuade such attacks.

The IDF said its soldiers calmly stood at the doorway and warned Rayan’s father about the stone-throwing — the military says Rayan’s older brothers, aged 8 and 10, may have been responsible for hurling the rocks.

Rayan’s father, Yasser Suleiman, however, described a much more confrontational interaction, one that literally scared Rayan to death. In an interview with Israeli activist Yuval Avraham, Suleiman stated that IDF soldiers were running after children at random throughout the neighborhood when, from outside the house, they yelled orders at him to come down. According to Suleiman, the soldiers demanded that he summon his children, then pointed a gun at him when he protested.

Suleiman stated that his son Rayan watched his two brothers being interrogated by the IDF from the second floor and tried to escape out the back door. Soon after, according to Suleiman, an IDF soldier came to inform him that his son had fallen. He found Rayan lying dead on the floor.

“He was just an innocent boy, just 7 years old, what can he do?” Yasser Suleiman, Rayan’s father, told The Associated Press outside the hospital morgue on Friday, choking back tears.

“He died of fear on the spot.”

Father of 7-year-old Palestinian boy Rayan Suleiman, mourns over his son’s body at a hospital in the West Bank village of Beit Jala just before his funeral Friday, Sept. 30, 2022. (AP/Mahmoud Illean)

The IDF, however, said that Rayan was taken to the hospital a significant amount of time after its soldier had left.

Rayan’s aunt, who was home at the time of the incident, said even she was terrified when Israeli soldiers burst into the home. She said they handed her a paper in Hebrew she couldn’t read and yelled, ‘We want the boys, where are the boys?’”

“The kids are always in danger, from settlers from the army, on their way back from school,” said the aunt, who gave her name as Umm Ali, noting that soldiers sometimes patrol a verdant shortcut that kids take from school to their homes. “Rayan is not the first one, he is only the latest.”

Palestinian sources have diverged over whether a heart attack or a fall from an unspecified height caused Rayan’s death. The results of a full autopsy have yet to be issued. 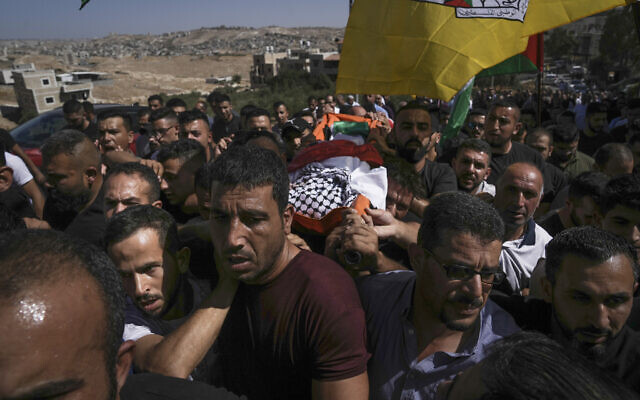 Mourners carry the body of 7-year-old Palestinian boy Rayan Suleiman during his funeral in the West Bank village of Tequa near Bethlehem Friday, Sept. 30, 2022. (AP/Mahmoud Illean)

A pediatric specialist, Dr. Mohamed Ismail, said Rayan was healthy and had no previous medical conditions.

“The most probable scenario of what happened is that under stress, he had excess adrenaline secretion, which caused the increase of his heart beat,” Ismail said. “He developed cardiac arrest.”

At the mosque, the imam focused less on the political situation than on the lessons of justice to be found in the Quran and the comfort to be found in God’s mercy. He did, however, have some choice words for Israel, whom he accused of “committing crimes against our sons.”

He also referenced the United States urging an investigation into Rayan’s death and international condemnation.

According to Khaled Elgindy, a expert on Palestine at the Middle East Institute, said the US call “indicate[s] some serious concerns about the circumstances surrounding an incident.”

Rayan’s death struck a nerve with Palestinian parents. Fear for their children’s safety and the dread of soldiers knocking on the door are part of daily life under an entrenched Israeli military rule that is now in its 56th year. 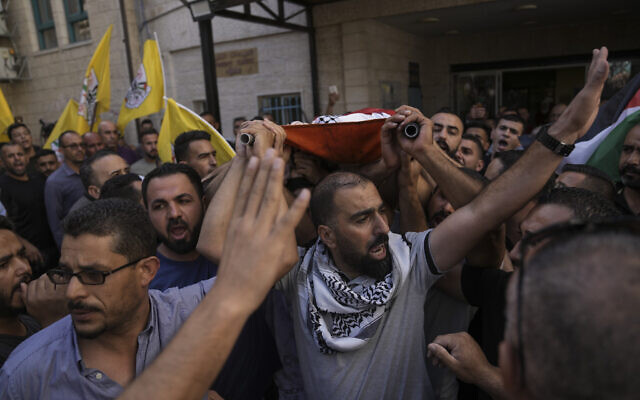 Palestinian mourners carry the body of 7-year-old Palestinian boy Rayan Suleiman, from a hospital in the West Bank village of Beit Jala to his nearby village Friday, Sept. 30, 2022. (AP/Mahmoud Illean)

Musa, a 48-year-old native of Tuqu’, told ToI his own 8-year-old son had been arrested for throwing rocks, a manifestation of his son’s feeling  of “belonging to Palestine.”

He said he attended the funeral because it is “a duty.”

“We are a family here, so we must stick together, whether for happy occasions or sad ones like this,” he said.

A 38-year-old man who identified himself as Abu Muhammad said he feared for his own son, who is Rayan’s age, noting that tensions often run high in areas where Arab communities and Israel settlements exist side by side, such as Tuqu’ which sits adjacent to the settlement of Tekoa.

Israel categorizes stone-throwing as a felony punishable by up to 20 years in prison. According to a recent report Defense for Children International – Palestine, stone-throwing is the most common charge against the 500-700 Palestinian children detained by Israel each year. Israeli law prohibits the detention of any one under the age of twelve, but there are reports of Israeli security forces holding up children younger than that.

As the funeral ended, a fresh outburst of violence appeared to be simmering as small crowds of young men cursed and hurled rocks at Israeli armored vehicles rumbling through the streets of Tuqu’.