Far-right MK Itamar Ben Gvir was threatened with death, according to a recording released Tuesday, after being the subject of a foiled Hamas-backed assassination plot and previous death threats.

“I’m on my way to you… I prepared a cartridge with 16 bullets. I will take care of you, your wife and your children,” a man can be heard telling Ben Gvir in a recording of a phone call published by the Ynet news site

“You will get to know my gun up close, my cartridge from up close,” the caller continues. “You harmed our nation too much and your time will end.”

During the conversation, Ben Gvir can be heard asking the caller, “What will you to do me?” He also asked the man his name and where he lives.

The caller identified himself as a policeman named Ismi Abbed from northern Israel, who police later said was not an officer.

Police launched an investigation and said they were “working to identify the person behind the threat and bring him to justice.”

After receiving the call Monday, Ben Gvir claimed during a Knesset plenum session that he was a victim of incitement by government leaders.

“Naftali Bennett called me and my colleagues ‘poison,'” Ben Gvir said, referring to an open letter the prime minister published last week calling on the public to express continued support for his crisis-ridden government.

In the letter, Bennett denounced what he called a “deadly poison machine” of opposition lawmakers such as former premier Benjamin Netanyahu, Ben Gvir, Ayman Odeh and Bezalel Smotrich 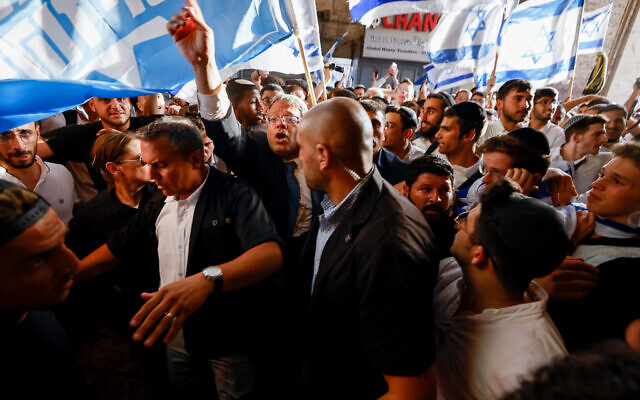 “I say to you — enough incitement, words can kill,” Ben Gvir added.

Ben Gvir, who heads the extreme-right Otzma Yehudit faction of the opposition party Religious Zionism, received a similar threat after he was barred from leading a nationalist march through Jerusalem’s Old City in April.

Last month, the Shin Bet announced it had foiled a Hamas-backed assassination attempt of Ben Gvir, among other terror activities.

Lapid offers a new path to residents of Gaza: livelihood, dignity and peace

Litzman gets minor fine, no jail for shielding alleged pedophile Leifer from justice

With elections looming, Lapid’s Gaza gamble seems to have paid off

Erdogan rails at Israel over Gaza fighting: ‘No excuse for killing children’

Report: Trump demanded his generals be loyal like German generals were to Hitler

Lapid is the Gaza operation’s political winner, but can this be converted to votes?

Operation Breaking Dawn was a tactical success, but won’t be last round of fighting

As Gaza ceasefire holds throughout the night, Israel to reassess safety restrictions

Rocket-proof and ready for anything, new hospital near Gaza unfazed by flareup