Outgoing Defense Minister Benny Gantz on Thursday condemned a statement by the far-right Noam party that called Egyptian troops who fought Israel in the 1967 Six Day War “soldiers of the enemy,” arguing that it amounts to calling today’s Egypt an enemy state.

Noam’s statement on Wednesday came after the Kan public broadcaster reported that Israel is weighing the idea of putting up a monument commemorating Egyptian commando forces killed during the war, in which Syria and Jordan also fought against the Jewish state.

The ultra-conservative party — set to head a body in charge of Israel’s Jewish identity in the presumed upcoming government — said it’s a “delusional idea” to erect a monument “in memory of soldiers of the enemy who tried to destroy us.”

“The people of Israel voted for a state with a Jewish identity, and that’s what it will be,” Noam added.

Gantz called Noam’s statement an “attempt to paint Egypt as an enemy,” highlighting the importance of the peace deal signed in 1979 to regional stability and the fight against terror in Sinai and Gaza.

“In recent years we have further deepened our cooperation in additional areas,” Gantz said in statement issued in Hebrew, English and Arabic. “The State of Israel and Israel’s defense establishment view Egypt as a critical ally.” 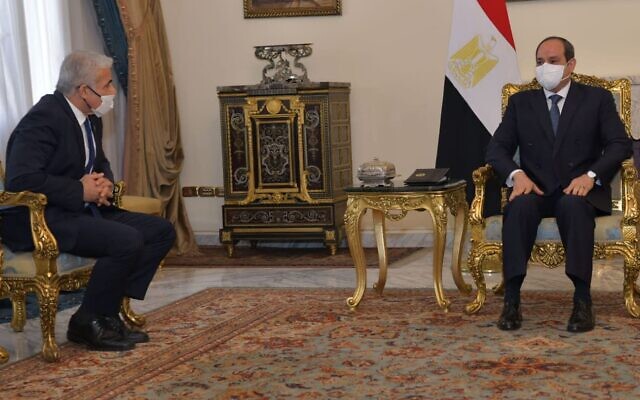 According to Kan, an Egyptian delegation is due to visit next week to discuss the proposed memorial for the commandos.

The soldiers were killed in a battle with IDF troops. Israeli authorities subsequently buried the bodies in a 20 meter-grave at Kibbutz Nahshon, Haaretz reported over the summer.

Egyptian President Abdel-Fattah el-Sissi raised the matter during a phone call in July with Prime Minister Yair Lapid, who instructed his office to examine the issue.

Palestinian jailed for life plus 20 years for murder, rape of teen Ori Ansbacher

‘His soul is eternal’: Funerals held for 3 victims of Jerusalem terror attack