The Israeli military said Thursday that its Cyber Defense Brigade and the United States Cyber Command held a joint exercise over the past week.

The drill included training for “several real-world scenarios… with an emphasis on the Middle East,” the Israel Defense Forces said.

“This exercise is a continuation of the IDF’s close cooperation with USCYBERCOM and expresses the growing partnership between the US Armed Forces and the IDF in the cyber domain, which is reflected in joint and intensive operational activities in various arenas,” the IDF added.

The Cyber Defense Brigade, part of the IDF’s Computer Service Directorate, is a technological operational body that is in charge of providing the Israeli army and all of its systems with the defense it needs from cyberattacks.

The drill took place at the Georgia Cyber Center, in Augusta, Georgia, and is the seventh such joint exercise between the IDF and the US Cyber ​​Command, the military said.

“Cyberspace ​​is a combat dimension that has been developing at a significant pace in recent years. Cyberwarfare takes place continuously around the world, and has a diverse potential for influence in different circles,” said Maj. Gen. Eran Niv, head of the Computer Service Directorate.

“The exercise, which is not the first or the last, practically reflects the challenges of the cyber dimension, which changes from year to year and presents us with strategic challenges,” said the commander of the Cyber Defense Brigade, Brig. Gen. “Resh” — who can only be identified by the initial of his first name and rank due to security concerns. 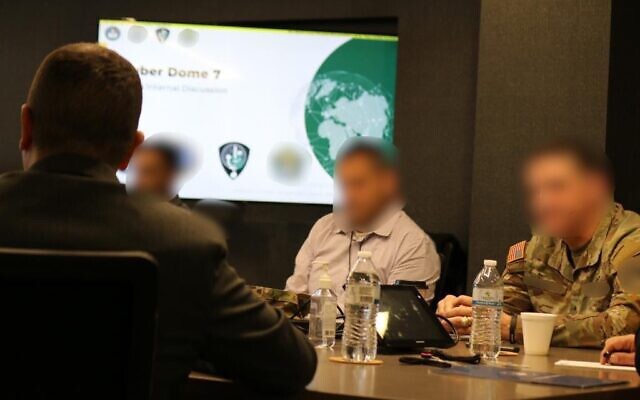 In September, a senior IDF officer said the military had foiled dozens of attempted Iranian cyberattacks — mostly on Israeli civilian infrastructure — over the past year.

Israel and Iran have been engaged for years in a largely clandestine cyberwar that occasionally bubbles to the surface. Israeli officials accused Iran of attempting to hack Israel’s water system in 2020, while Iran has blamed Israel for cyberattacks on the country’s infrastructure.

The IDF believes that one of Iran’s main goals when it comes to cyberattacks is to instill fear within Israeli society. Therefore, Iran primarily targets civilian sites that do not necessarily cause damage to the military, but cause panic among the public.

Aside from the attempted attack on Israel’s water systems in 2020, a cyberattack in June thought to have been carried out by an Iranian group caused false rocket sirens to ring out in Jerusalem and Eilat.

Last year, a hospital in central Israel came under a major cyberattack, and its systems remained down for several days until military officials and other experts assisted in restoring its data. 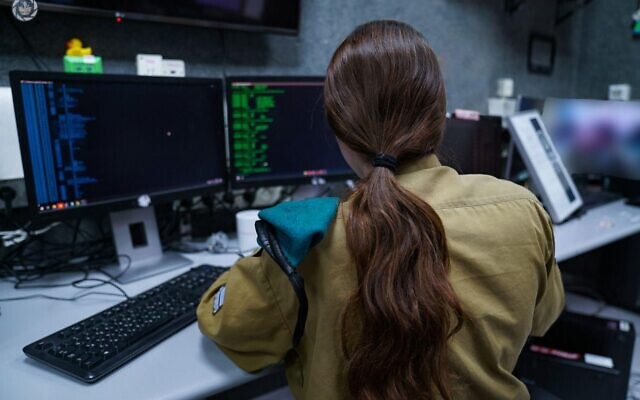 An Israeli soldier of the C4I Corps works at a computer, in an undated photo published by the military on September 21, 2022. (Israel Defense Forces)

The IDF says it has assessed that Iran has invested enormous resources into the development of offensive cyber capabilities.

At the same time, the IDF says it has invested its own resources into expanding its existing cyber defense capabilities, including holding routine drills with American counterparts at the United States Cyber Command.

Meanwhile, Iran has accused the United States and Israel of cyberattacks that have impaired the country’s infrastructure.

In June, an alleged Israeli cyberattack caused a large fire at a major Iranian steel plant. The attack was claimed by an anonymous group, but footage of the incident was published by Israeli TV, hinting that the operation had been carried out by Military Intelligence.

Iran disconnected much of its government infrastructure from the internet after the Stuxnet computer virus — widely believed to be a joint US-Israeli creation — disrupted thousands of Iranian centrifuges in the country’s nuclear sites in the late 2000s.

Israel generally maintains a policy of ambiguity regarding its operations against Iran and does not disclose its responsibility for them.