In hitting bottom, an alcoholic psychiatrist finds the key to fighting addiction

Carl Fisher remembers the precise moment alcohol took over his life. He was 29 years old. In the space of a few weeks, he went from being a seemingly stable, happy-go-lucky physician in a psychiatry residency program at Columbia University, to a psychiatric patient in the depths of despair at Bellevue Hospital in New York.

“When I wound up in the hospital at Bellevue, I immediately had a sense that something was desperately wrong,” the 41-year-old Jewish-American author says via a Zoom call from Lisbon, Portugal, where he lives part of the year with his partner and son. “I then opened up to my treatment team and said, ‘I’m an alcoholic, I give up, I can’t fight it anymore.’”

Fisher got sober and eventually returned to the residency program at Columbia. Today he is an assistant professor of clinical psychiatry at the prestigious Ivy-League university in upper Manhattan.

He recalls his rocky road to recovery in “The Urge: Our History of Addiction.” Using his own complex battle with addiction as a starting point, Fisher’s book, which took a decade to research and write, argues that understanding addiction in the present requires a detailed study of addiction in the past.

Beginning his investigations during an opioid crisis in the United States, Fisher learned that societies have been wracked by drug epidemics with dismaying regularity for more than half a millennium. He also came to understand how centuries of cultural policy, stigma, and racism cannot be separated from how we currently understand and treat — or in most cases fail to treat — addiction in Western societies.

Fisher speaks to The Times of Israel ahead of World Drug Day. Marked annually on June 26, it was set up in 1987 by the United Nations Office on Drugs and Crime (UNODC) to raise global awareness about substance abuse and the unlawful trade of drugs. The intended aim of World Drug Day is to eventually achieve an international society free of drug abuse.

Fisher believes that goal, while well-intentioned, is unrealistic.

“There are no good and bad drugs,” he says, adding that the lines dividing illegal drugs and the pharmaceuticals that most governments and health officials around the world do condone are not very clear, either.

In fact, Fisher says, most official governmental policies on drugs — especially in the United States — have been driven by racism, anti-immigration sentiment, and various attempts to criminalize certain groups of users. Cocaine, for example, was mostly seen as a relatively benign drug in the US, like coffee or tea, until Black Americans began using it, while opium scares have also been fed by xenophobic sentiment against Chinese immigrants in American society.

And most narratives around addiction largely involve wielding it as a weapon to wage war — not just on drugs, but also on people who use them, Fisher says.

“A common mistake people tend to make when talking about legalizing drugs is they get stuck in these simplified binaries, like prohibition versus legalization,” he says. “But societies that have done a really good job relaxing the legalities of drugs have paired it with a really powerful and broad sweep of social services, including housing, employment, and other ways of building structure, meaning, purpose, and a sense of community in people’s lives.” 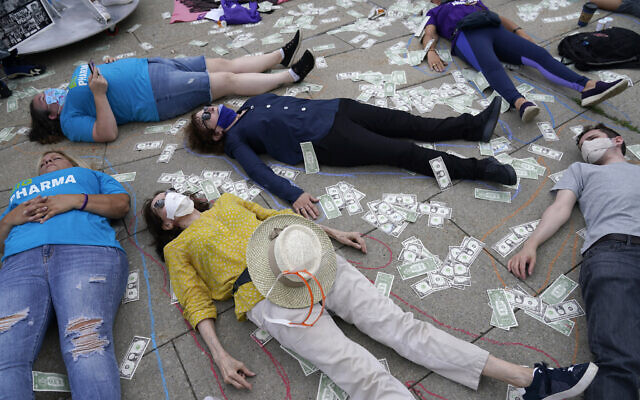 Illustrative: Protesters stage a die-in and have their shapes traced on the sidewalk outside the courthouse where the Purdue Pharma bankruptcy is taking place in White Plains, New York, August 9, 2021. (AP Photo/Seth Wenig)

Living in Portugal, Fisher has come to admire the country’s handling of drug decriminalization and calls it a model the rest of the world should look to.

“In Portugal, decriminalization policies were paired with social policies to make a really good reduction rate on an epidemic,” Fisher says.

This stands in stark contrast to the US, he says. America has recently made the move towards decriminalizing cannabis, Fisher says, but that decision has not been followed up with additional social support from government.

“When you deregulate a drug, but you don’t put in supportive structures with the people who have problems with that drug, then we can see a big wave of harmful abuse,” says Fisher. 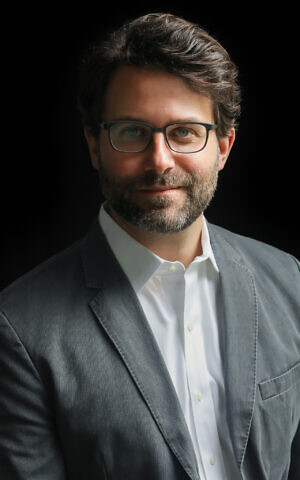 Carl Erik Fisher, psychiatrist and author of ‘The Urge: A History of Addiction,’ May 24, 2021. (Beowulf Sheehan)

Fisher admits that the history in his book is limited to the US — something that reflects his desire to understand addiction issues within the context of his own heritage and culture. But this focus is important for other reasons.

Fisher notes how the “disease idea of addiction” — that is, addiction as a chronic identity — solidified in the country’s early years, around the time of the Revolutionary War. That idea was then disseminated worldwide by movements that mostly have their origins in the US. He cites Alcoholics Anonymous (AA) and the decades-long “war on drugs” today as two examples. Both are American creations, and both have very fixed ideas about what makes an addict choose the behavior they do.

Framing addiction reductively, as a moral issue that separates good from bad, or the weak from the strong, tends to miss a crucial point — namely, that addiction exists in all of us to some degree, Fisher says.

“Thinking about addiction as something that’s intrinsic to the human condition and that involves an element of choice, is really useful,” says Fisher. “Because it shows how addiction is a behavior we choose as a coping mechanism to handle our suffering and to seek distraction to avoid anxiety and pain.”

Using theology and philosophy as a guide to curb his own problematic relationship with alcohol brought Fisher to the conclusion that medical science alone, while important, was insufficient for understanding addiction. 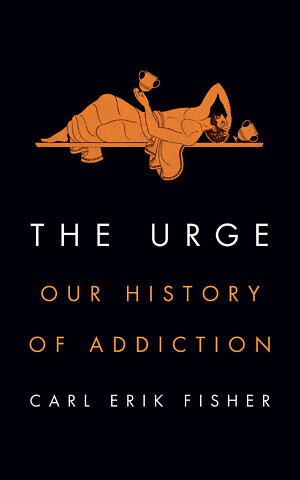 ‘The Urge: A History of Addiction,’ by Carl Erik Fisher. (Courtesy)

“There is a lot to learn from the spiritual side of addiction because it gives the sense that there is something beyond medicine,” says Fisher. “My primary home for recovery is Buddhism, and all Buddhist practitioners take certain precepts, one of which is to vow to abstain from intoxicants.”

“I got a lot out of medicine — psychotherapy, group therapy, and other treatments for addiction. They helped save my life in certain ways,” he says. “But sometimes the debates in medicine and science can become extremely polarized, where people tend to talk past each other, don’t find common ground, and get caught up in very abstract explanations.”

Fisher says this is especially true in the brain-centered field of neuroscience. For many years psychiatry has operated under the working theory that mental disorders were categorical, fixed entities.

Today, however, more people in the scientific and medical community recognize that mental disorders may exist on a continuum, Fisher says. He also points out that existing scientific data doesn’t demarcate a clear line on how to differentiate between mild and severe issues pertaining to addiction.

Fisher concludes his book with an ambivalent definition of addiction: “It is profoundly ordinary — a way of being with the pleasures and pains of life, and just one manifestation of the central human task of working with suffering,” he writes.

If addiction is simply part and parcel of being human, the author claims, we should not seek to eradicate addiction — rather, we must find ways of working with it. Attempting to wage war on addiction, Fisher says, is an attempt at waging war on human nature.

“These questions about addiction don’t have easy answers because they are essentially questions about what it means to be human,” Fisher says. “Addiction is not a curable disease or something that we can just stop. So many times throughout the history of addiction we have done more harm than good by trying to stop it.”

Man suspected of threatening Lapid: ‘I want to murder you with a sniper rifle’

Around 50 missing after migrant boat sinks near Greek island

Large explosions rock Russian military air base in Crimea; at least one killed

Troupe questions if ‘Merchant of Venice’ is kosher for modern times

Israeli teen invited on stage to perform with Coldplay in Belgium

Facebook turned over messages to Nebraska cops ahead of teen, mom abortion charges

Crime boss arrested at airport upon returning to Israel

Cost of living, economy are top priority for voters in upcoming election — survey

The forgotten heroine of the 1975 Savoy Hotel terror attack

Mayor arrested on suspicion of bribery, fraud and breach of trust

Days after ceasefire, Gantz says Islamic Jihad leaders in Gaza should be ‘worried’