TEHRAN, Iran — Iran dismissed as “fiction” on Thursday US allegations it had plotted to kill former White House national security adviser John Bolton in retaliation for the assassination of one of its top commanders.

The US claim comes at a crunch moment in talks on reviving a nuclear deal between Iran and major powers that Washington had abandoned in 2018 but has said it wants to rejoin, with Iran now considering what European Union mediators have called a “final” text.

“This time they have come up with a plot involving individuals like Bolton whose political career has failed,” Kanani scoffed.

“The Islamic Republic warns against any action that targets Iranian citizens by resorting to ridiculous accusations.”

The US Justice Department said Wednesday that it had indicted a member of Iran’s Revolutionary Guards over allegations he had offered to pay an individual in the US $300,000 to kill Bolton.

The plan was likely set in retaliation for the US killing of top Guards commander Qassem Soleimani in Iraq in January 2020, the department said. 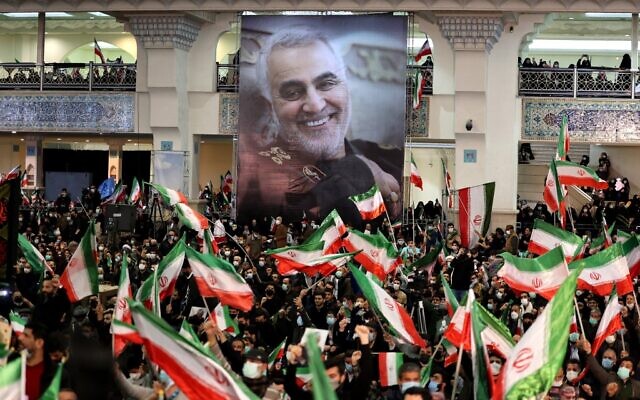 Iranians lift national flags during a ceremony in the capital Tehran, on January 3, 2022, commemorating the second anniversary of the killing in Iraq of top Iranian commander Qassem Soleimani (portrait) and Iraqi commander Abu Mahdi al-Muhandis in a US raid. (Atta Kenare/AFP)

Guards member Shahram Poursafi is also alleged to have dangled the possibility of a second target he said would earn the ostensible assassin $1 million.

The court papers did not identify that alleged target, but according to US media outlet Axios, it was former secretary of state and CIA director Mike Pompeo.

The person Poursafi was dealing with was actually an informant for the US Federal Bureau of Investigation, according to the court filings.

Poursafi was charged with the use of interstate commerce facilities in the commission of murder-for-hire, which carries up to 10 years in prison; and with providing and attempting to provide material support to a transnational murder plot, which carries a 15-year sentence.

The Justice Department said Poursafi remains at large and is believed to be in Iran.

“Should Iran attack any of our citizens, to include those who continue to serve the United States or those who formerly served, Iran will face severe consequences,” current White House national security adviser Jake Sullivan warned after the charges were announced.

Soleimani, a revered figure in Iran, was killed in a US drone strike just after he landed at Baghdad’s airport on January 7, 2020.

Since his death, Tehran has vowed to take revenge, and the US has ramped up security for prominent current and former officials, including Pompeo, who was leading the State Department when Soleimani was killed. 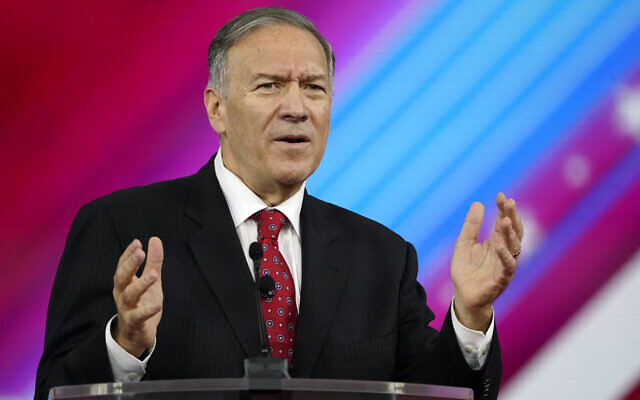 Bolton, who like Pompeo is a strong critic of Iran, was the national security adviser in the White House of former US president Donald Trump from April 2018 to September 2019.

He was strongly opposed to the 2015 deal placing limits on Iran’s nuclear program, and supported the Trump administration’s unilateral pullout from the pact in May 2018.

Bolton blasted Iran’s government as “liars, terrorists and enemies of the United States” in a statement on Wednesday.

Kanani said the US Justice Department’s “baseless claims” were a smokescreen to “avoid being held to account for the numerous crimes in which the US government has been directly implicated, like the cowardly assassination” of Soleimani.