German authorities believe Iran’s Islamic Revolutionary Guard Corps is behind a string of recent attacks on synagogues, according to a local report Thursday.

The Tagesschau news website, citing an investigation led by the attorney general of the North Rhine-Westphalia state, said investigators also believe the president of the Central Council of Jews in Germany, Josef Schuster, is in increased danger of being targeted by the Iranian cell accused of committing the other attacks.

The report named a German-Iranian suspect referred to as Ramin Y., saying he fled to Iran last year.

German security officials believe the suspect, who is wanted on an international arrest warrant for “a murder in the rocker milieu,” has operational command over IRGC attack plots in Germany, the report said.

“We’re talking about state terrorism here,” it quoted an investigator as saying.

No further details were given in the report on the suspected threat against Schuster. 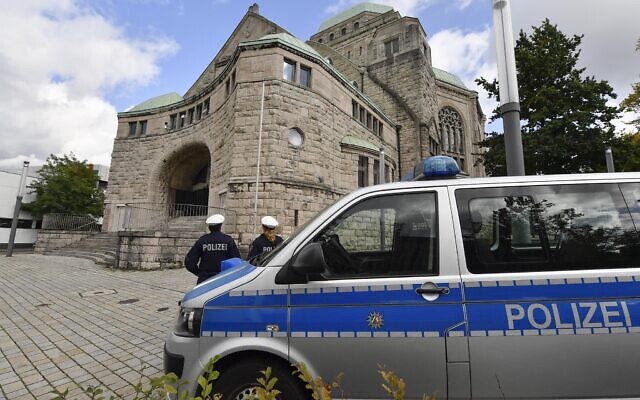 Iran has in the past targeted Israeli and Jewish figures and sites in numerous countries to retaliate for several high-profile assassinations and mysterious deaths of top Iranian officials in recent years, as part of the long-running shadow war between Israel and the Islamic Republic.

The recent attacks in Germany on Jewish houses of worship came three years after a gunman killed two people in the eastern city of Halle after failing to storm a synagogue on Yom Kippur. Before the attack, he had posted a racist, misogynistic and antisemitic manifesto online.

Germany in May reported a new record in the number of politically motivated crimes last year, including a nearly 29 percent jump in antisemitic crimes to 3,027.

Seven decades after the Holocaust, in which the Nazi regime slaughtered six million Jews, the vast majority of the offenses — 2,552 — were attributed to the far-right.

What happens when a Holocaust denier moves into your cellar?

4 women indicted for allegedly attempting to smuggle drugs worth millions

In now annual tradition, US urges Israel to keep friction in check ahead of Ramadan