Iran on Saturday claimed a British-flagged oil tanker it confiscated in the strategic Strait of Hormuz was seized because it had “collided with a fishing boat.”

Authorities said the Stena Impero was now at anchor off the port of Bandar Abbas with all its crew aboard.

“The British tanker Stena Impero collided with a fishing boat on its route and, according to law, after an accident it is necessary that the cause of the accident is investigated,” said Allah-Morad Afifipoor, director-general of the Hormozgan province port and maritime organization.

He added that an investigation had been started “by experts,” though he did not elaborate.

The Stena Impero “has 23 crew and they are all on the ship” off Bandar Abbas, he said, quoted by the Fars news agency.

Eighteen crew were Indian, including the captain, and the rest were from the Philippines, Latvia and Russia.

Iran’s Islamic Revolutionary Guard Corps said on Friday it had seized the Stena Impero in the Strait of Hormuz for breaking “international maritime rules.”

Britain said Iran had seized two vessels in the Gulf, but the British owner of one of the tankers, the Liberian-flagged Mesdar, said it had been temporarily boarded by armed personnel, but was later allowed to leave and that all crew were “safe and well.”

Stena Impero owner Stena Bulk said in a statement that it “can confirm that… our managed vessel Stena Impero was attacked by unidentified small crafts and a helicopter while transiting the Strait of Hormuz while the vessel was in international waters.”

And the United States, which has blamed Tehran for a series of tanker attacks in the Gulf in recent months despite Iranian denials, denounced what it called “escalatory violence” by Iran in the strategic waterway.

“The US will continue to work with our allies and partners to defend our security and interests against Iran’s malign behavior,” National Security Council spokesman Garrett Marquis said in a statement.

London on Saturday advised British ships to avoid the Strait of Hormuz for “an interim period.”

British Foreign Secretary Jeremy Hunt warned there would be “serious consequences” if Iran did not swiftly release the tanker, though he said London was not considering military options.

“This is completely unacceptable,” Hunt said. “Freedom of navigation must be maintained. We will respond in a way that is considered but robust and we are absolutely clear that if this situation is not resolved quickly there will be serious consequences.” 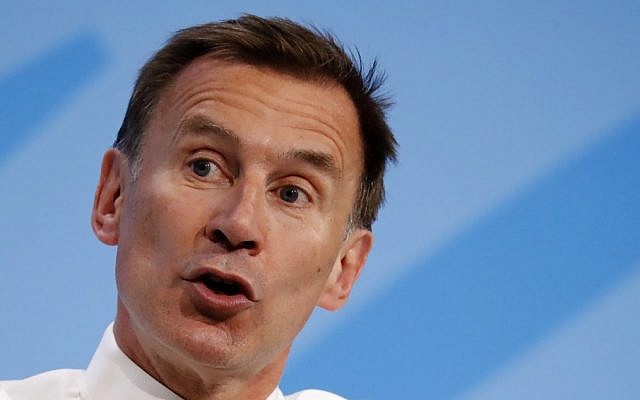 Hunt said he had spoken with US Secretary of State Mike Pompeo about the incident and would soon speak with Iranian Foreign Minister Mohammed Javad Zarif.

The Philippines said Saturday it would ask Iran to free a Filipino crew member of the British-flagged tanker.

“Ambassador to Iran Fred Santos is contacting Iranian authorities to seek assurance that the Filipino seafarer is safe and will be released soon,” the Philippine foreign department said.

The seizing of the British tanker marked perhaps the most significant escalation since tensions between Iran and the West began rising in May. At that time, the US announced it was dispatching an aircraft carrier and additional troops to the Middle East, citing unspecified threats posed by Iran.

The ongoing showdown has caused jitters around the globe, with each maneuver bringing fear that any misunderstanding or misstep by either side could lead to war.

The seizure of the Stena Impero came just hours after Gibraltar’s Supreme Court announced it would extend by 30 days the detention of an Iranian tanker seized two weeks ago on allegations that it was headed to Syria in violation of sanctions. 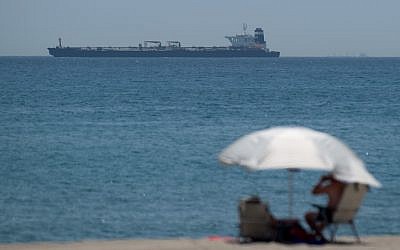 A picture shows supertanker Grace 1, suspected of carrying Iranian crude oil to Syria in violation of EU sanctions, after it was detained off the coast of Gibraltar on July 4, 2019. (Jorge Guerrero/AFP)

British authorities’ detention of the Grace 1 supertanker sparked outrage in Tehran, which accused London of doing the bidding of the Washington in action that is “tantamount to maritime banditry.”

The Guards also seized another “foreign tanker” on Thursday, believed to be the Panamanian-flagged vessel Riah and its crew, and accused the ship of smuggling Iranian fuel.

US President Donald Trump said US officials would talk with Britain about the unfolding crisis.

“This only goes to show what I’m saying about Iran: Trouble, nothing but trouble,” he said.

Central Command said the US has intensified air patrols over the Strait of Hormuz in response to the seizure. 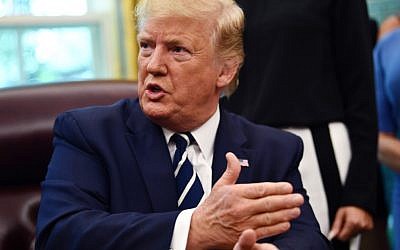 US President Donald Trump speaks at a ceremony commemorating the 50th anniversary of the moon landing, on July 19, 2019, at the White House in Washington, DC. (Brendan Smialowski / AFP)

Before the British ship was seized, Iran and the United States disagreed over Washington’s claim that a US warship downed the Iranian drone. American officials said they used electronic jamming to bring down the unmanned aircraft, while Iran said it simply didn’t happen.

Maritime security in the Strait of Hormuz has deteriorated in recent weeks after six attacks on oil tankers that the US has blamed on Iran — an allegation the Islamic Republic denies.

There was also a brief, but tense standoff between the British navy and Iranian Revolutionary Guard vessels recently. The British navy said it warned three Guard vessels away after they tried to impede the passage of a commercial British tanker that the navy was escorting.

Sterling on the record for goals in a season: we Want to win the Champions League and the FA Cup, otherwise they won't mean anything
Sheffield will finish the Premier League season without defeats from clubs from London. 22 points in 10 games and 5 home wins
Bonucci on Juve's draw with Atalanta: We must look at the result. This is how Championships are won
Sterling surpassed Yaya Toure to become Manchester City's 2nd goalscorer in the history of the Premier League
Gasperini on two penalties for Juve: They are above any rules in Italy. Did we have to cut off our hands?
Sarri Pro 2:2 with Atalanta: We played with one of the best teams in Europe right now
Pep Guardiola: Manchester City have won a place in the Champions League on the pitch. I hope that UEFA will allow us to play
Source https://www.timesofisrael.com/iran-says-british-tanker-seized-over-collision-with-a-fishing-boat/

Poles go to polls to vote in tight presidential runoff

Long tail of coronavirus can prolong suffering for months

As virus rages in US, President Trump finally wears a mask

‘Who wants to feed a Bedouin?’: Children’s TV star apologizes for racist video

Israel seeks edge at intersection of biology with engineering, AI

Yitzhar in message to residents - 'You went too far'

The agony of the COVID-19 obituarist