The Israel-born former treasurer of British Prime Minister Boris Johnson’s Conservative party is suspected of funneling money from the Russian bank account of a wealthy Crimean businessman to Tory coffers, according to a report Thursday.

Ehud Sheleg, whose family owns London’s posh Halcyon art gallery, was accused of donating $630,255 to Johnson’s election campaign in February 2018 — money that actual came from his father-in-law Sergei Kopytov, a former senior pro-Kremlin politician and businessman in Crimea, according to a bank alert detailed by The New York Times Thursday.

According to the January 2021 alert, in early 2018, Kopytov transferred $2.5 million to an offshore account linked to a Sheleg family trust via a series of seemingly inactive accounts belonging to Sheleg and his wife, Kopytov’s daughter Liliia Sheleg. About a month later, the money was moved to a UK account shared by the couple, and a day later, the donation of over $630,000 was made to the Conservatives.

“We are able to trace a clear line back from this donation to its ultimate source,” Barclays wrote in the alert, according to the report. “Kopytov can be stated with considerable certainty to have been the true source of the donation.”

It was not clear why the alert was only issued three years after the donation.

Sheleg, Kopytov, the Conservatives and Johnson all denied wrongdoing or declined to comment.

A lawyer for Sheleg told the NYT that Kopytov had sent the $2.5 million, which he got from a property sale, to the family trust as a gift and to repay a loan. Sheleg borrowed the money from the trust to donate to Johnson.

But officers at Barclays noted that the accounts that the money came through were empty before and after the transfers, raising suspicions that they were used to make the source more opaque.

Sheleg’s lawyer said the balances didn’t matter; the fact that his client did not need Kopytov’s money to make the donation was important.

“There is absolutely no basis for suggesting that Mr. Kopytov’s gift for his daughter was intended as, or for the purpose of making, a political donation to the Conservative Party,” he said.

Kopytov also denied that he had made a political donation, in a statement sent to the NYT via Sheleg’s attorney.

“I have no interest in British politics whatsoever,” he said, describing himself as a Ukrainian citizen. “Any donations made by my son-in-law to a British political party have nothing to do with me or with the money I gifted to my daughter.”

It is illegal in the UK to accept political donations of more than 500 pounds ($610) from foreigners who cannot vote in Britain.

Asked about the report Thursday, Johnson told Sky News that all party donations had been registered “in the normal way” and noted that foreigners were not allowed to donate to political parties. 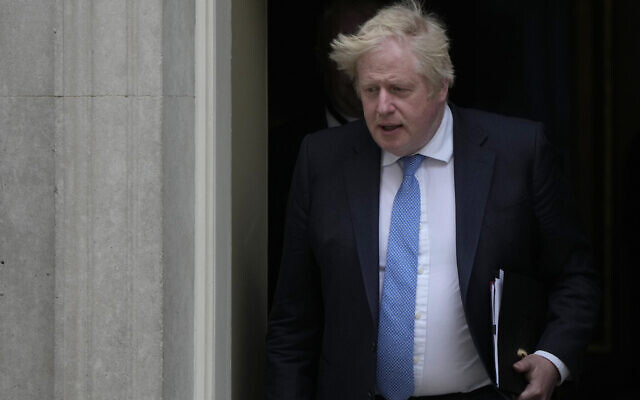 Britain’s Prime Minister Boris Johnson leaves 10 Downing Street for the House of Commons to make a statement about Downing Street parties during the coronavirus lockdowns in London, on April 19, 2022. (AP Photo/Alastair Grant)

The Tories have heartily embraced Sheleg, who was appointed treasurer after leading donations in 2019, the same year he was knighted. He stepped down as treasurer in 2021.

According to the NYT, Sheleg has been flagged in the past for meetings with Russian officials or figures with alleged ties to Russian organized crime, despite frayed ties between Moscow and London. The paper noted that Russia-linked donations surged while he was the top fundraiser.

Sheleg’s brother Ran Sheleg was a partner in an Israeli company marketing binary options, a largely fraudulent investment vehicle now outlawed in Israel. Some corners of the industry were seen as having ties to alleged Russian criminal enterprises.

Ran Sheleg, who is also a beneficiary of the family trust and listed as an officer of his brother’s Halcyon Gallery, has denied involvement in any fraudulent activity. He told a 2019 investigation that the binary options firm had been a failure.

Bank alerts, which are known as suspicious activity reports in the US, are notices  financial institutions file with law enforcement agencies if they flag potentially suspicious activity, are generally kept confidential. The NYT did not say how it obtained the Barclays report.

In 2020, over 2,500 suspicious activity reports filed with the US treasury Department were leaked to Buzzfeed and the International Consortium of Investigative Journalists, containing alerts from 90 banks, including Barclays.

US regulators: Pfizer’s COVID vaccine appears effective for kids under 5

Israeli hospital: Those who were vaccinated, had Omicron best protected against BA-5

In hitting bottom, an alcoholic psychiatrist finds the key to fighting addiction

Driver remanded over killing of volunteer cop at sobriety checkpoint

Rebel Meretz MK: I have lost faith in the coalition leaders

Israel Baseball swings for the fences, building the field in hopes players come

Man gunned down, killed in his car in northern town of Jatt

‘March for our lives’: Thousands rally across US to demand new gun safety laws

Bennett: Iran dangerously close to nukes; may get there soon if no Western pressure