JTA — Doreen Alhadeff was the first American Jew granted Spanish citizenship under Spain’s 2015 law to repatriate Sephardic Jews from around the world. Now she is going to be knighted by Spain’s monarchy for helping others obtain that same citizenship.

Alhadeff, a 72-year-old real estate agent from Seattle, will be knighted under the order of Queen Isabella the Catholic next month, the Seattle Times reported Monday.

Since earning Spanish citizenship in 2016, Alhadeff has helped guide people around the world, from Greece to Hong Kong, through the application process. Alongside synagogue leadership and the Spanish Jewish community federation, or FCJE, she also helped members of Seattle’s Congregation Ezra Bessaroth, an Orthodox Sephardic congregation that “holds fast to the traditions of the Island of Rhodes,” certify their heritage research.

“I think it shows unbelievable promise,” Alhadeff told the Seattle Times of her upcoming knighthood.

The order under which Alhadeff will be knighted is named for Queen Isabella I of Castile — the same Queen Isabella who, along with her husband King Ferdinand II of Aragon, carried out the Spanish Inquisition and issued the Alhambra Decree, which expelled Jews from Spain.

Alhadeff has spent much of her life deeply involved in her local Sephardic community. She remembers her grandparents and aunts and uncles speaking Ladino, or Judeo-Spanish, at home. She founded the Seattle Sephardic Network in 2013, which aims to provide cultural programs and events for the community and has resources for people looking to receive Spanish or Portuguese citizenship. Alhadeff’s husband, Joseph, also serves on the board of the Seattle Sephardic Network. 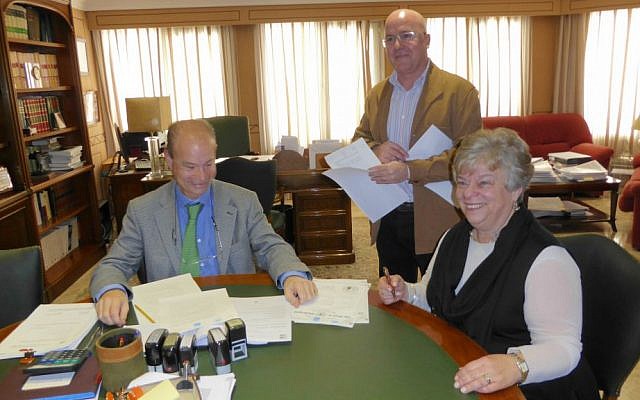 “When I go to Spain, I feel home,” Alhadeff told the Seattle Times. When she signed her citizenship papers in 2016, she told the Times of Israel, “I felt a bit as if I were walking in the footsteps of my grandmother.”

Only about one quarter of the people who have applied for Spanish citizenship through the 2015 law have received it — 36,000 out of 153,000, as of January. Portugal, which has a similar law, has naturalized 54,000 people, but since Russian oligarch Roman Abramovich earned Portuguese citizenship through it, stirring controversy over the naturalization process earlier this year, the law’s eligibility requirements have become stricter. Applicants now require an “effective connection with Portugal,” such as a record of prior visits to the country or an inheritance of property.

The application process for Spanish citizenship is lengthy and complicated: those who apply must prove their Sephardic heritage and pass tests on Spanish language, culture and values through the Cervantes Institute, which only has four locations in the United States. Prospective citizens must also get their documents notarized in Spain.

Seattle is home to around 5,000 Sephardic Jews, the third-largest Sephardic population in the United States. The city’s Sephardic community now includes people from countries such as Morocco, Iran, the former Soviet Union, Israel and Mexico, but in the earlier years of the 20th century, Sephardic immigrants were predominantly of Turkish or Rhodesli origin. Alhadeff’s grandmother, Dora Levy, was the first known Sephardic woman to come to Seattle, making the journey from then-Constantinople to Washington in 1906.

Time100 Impact Awards to be held in Jerusalem in May

US blacklists Erdogan-linked businessman for violating sanctions on Iran, Hezbollah

Food giant Strauss to hike prices by up to 9%, cites raw material costs

Haredi MK: Yeshiva students can serve in IDF if everyone else learns Torah

US anti-drug agency using Israeli spyware, but Biden looking to crack down — report

No house, no problem: NIS 300,000 can still buy a ticket on the real estate express

Radiation protection from Kyiv to the moon: Israeli space tech to shield Ukrainians

Join ToI’s live event: Reform or ruin? The next coalition’s plans for the judiciary

With doubts rising in Bahrain, Herzog seeks to get Abraham Accords back on track