The sharp comments came with Netanyahu seemingly closing in a government, and amid ongoing criticism from his political rivals, who accuse him of carving up key agencies for his right-religious allies while negotiating from a weakened position due to his ongoing corruption trial.

“What is the purpose of a government?” Lapid asked in a Facebook post. “A government is a body that is supposed to manage our lives, to allow order, to set priorities. The reality is constantly changing, so the government is expected to create stability, to balance between different forces — healthcare and the economy, security and foreign policy, the short term and the long term.

“These are complex and important tasks and the balance between them is crucial,” he continued. “The system is naturally prone to disturbances. The prime minister and his ministers are responsible for stabilizing it, for making sure it’s working for the benefit of the citizens.”

Netanyahu’s expected government, the outgoing premier charged, would not be able to fulfill these requirements.

“This government is insane,” he wrote. “It’s a difficult thing to say, but there’s no other way of describing it. Netanyahu is weak and is being extorted by younger and more determined partners. They are creating an unmanageable structure, a government unable to govern.” 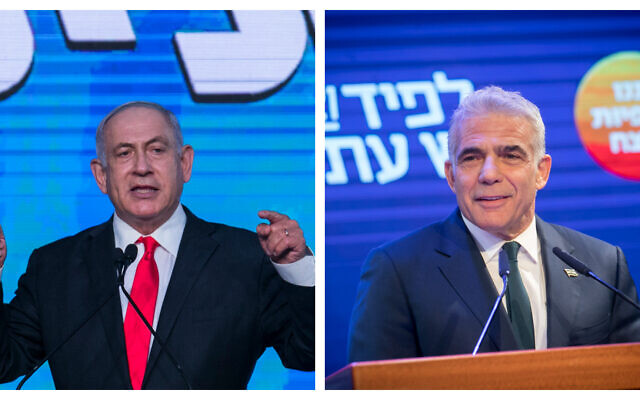 In his post, Lapid claimed that the de-facto implications of said appointments would be the dismantling of the defense and education ministries.

“Likud has become a junior partner in its own government,” he charged. “Netanyahu is at the peak of his weakness and extremists are pushing the system to unimaginable places.

“They’re doing everything as quickly as possible, trying to normalize the madness, to make us get used to it,” he wrote.

Concluding his post, Lapid vowed to keep fighting the incoming government. “We will be on bridges, at intersections and on the streets. We’ll defend the courts, the Israel Defense Forces, and the schools. We’re fighting for our country and we have no intention of giving up.” 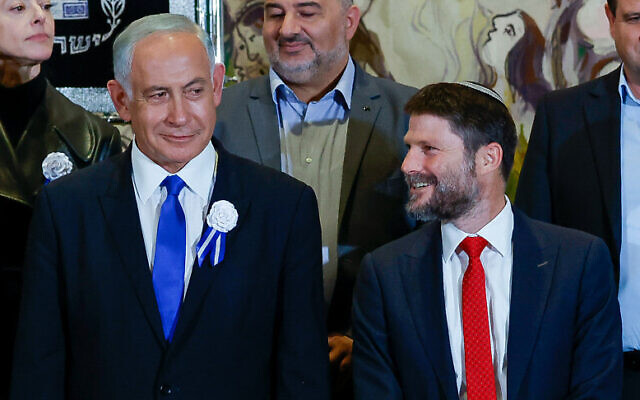 Likud leader Benjamin Netanyahu and Religious Zionist party head Bezalel Smotrich and other party leaders in a group photo after the swearing-in of the 25th Knesset, November 15, 2022. (Olivier Fitoussi/Flash90)

Supporters of Yesh Atid, the party led by Lapid, indeed gathered on bridges and at roundabouts throughout the country on Friday to demonstrate against the incoming government, with tens of thousands attending, according to the party.

“We call on all political parties in the country and Israeli citizens, including Likud supporters who are seeing how their party is deceiving them and harming the public, to join our struggle that starts today and will continue tomorrow throughout the country. We’re not suckers and we won’t stand by as they compromise on the future of our country and of our children,” read a statement issued by Yesh Atid.

Addressing protesters at the KKL Bridge in Tel Aviv, Lapid said that “the government being established right now is not a Likud government and not a right-wing one, it’s the most extremist and insane government in our history… We will never, ever give up.” 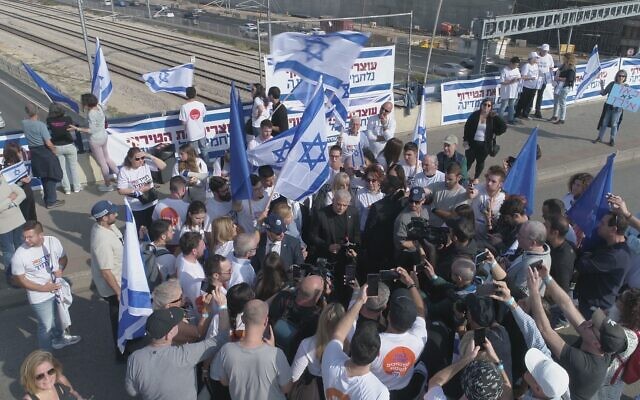 Netanyahu has accused Lapid of “spreading lies” about the elected incoming government.

In a Facebook post on Monday, Netanyahu said Lapid and outgoing Defense Minister Benny Gantz were “refusing to accept the results of the election and are spreading false fears against a government chosen by the majority of the public.” Lapid, he went on, “is waging a campaign meant to delegitimize the people’s choice.”

Lapid, meanwhile, railed against Netanyahu for portraying his criticism of the incoming coalition and its far-right members as sedition, saying he was just getting started.

Netanyahu’s 28-day mandate to assemble a government expires at midnight on Sunday night. On Thursday, he formally asked President Isaac Herzog for the maximal extension of two weeks to finish forming a government, saying the complexity of cobbling together his coalition required extra time.