Amid continued uncertainty about whether the school year will begin as normal in two weeks, Finance Minister Avigdor Liberman accused the Israel Teachers Union of “bullying” and trying to “take the students and parents hostage” by threatening a strike if their pay demands aren’t met.

The head of the Teachers Union has threatened to call a strike to block the planned opening of schools nationwide on September 1.

On Tuesday, Education Minister Yifat Shasha-Biton said the labor negotiations were not advancing fast enough. Shasha-Biton said salary offers by the Finance Ministry for teachers were unsatisfactory and accused treasury officials of dragging out talks until the last possible moment before September 1 to threaten the start of the school year.

At a press conference on Wednesday at the Finance Ministry offices in Jerusalem, Liberman said he wouldn’t give in to “violent behavior,” a day after the education minister’s accusations.

Liberman suggested that the Teachers Union was counting on the caretaker government to give in to its demands due to the looming November election.

“I’m hearing that some are sure that a government won’t be able to allow a strike two months before elections, and there is an attempt to take the students and parents hostage,” he said. “Violent and bullying behavior will not pay off.” 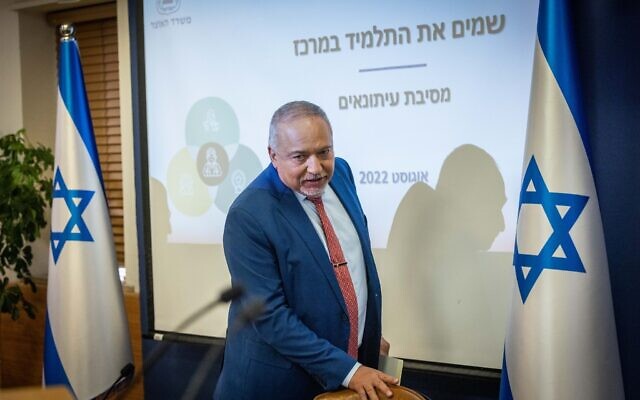 Standing beside the Finance Ministry official in charge of salaries, Kobi Bar- Nathan, Liberman presented the treasury’s full proposal for a wage agreement with the Teachers Union, acknowledging that any deal signed with teachers will immediately spark similar wage demands from other unionized sectors.

“This is the first time since the creation of the state that the education budget is bigger than any other budget, including the defense budget,” he claimed.

The starting salary for school principals will be a monthly NIS 20,000 ($6,140), with extra for principals who are also homeroom teachers.

Veteran teachers will get a raise of NIS 800 ($245) per month, according to Liberman’s proposal.

The finance minister said teachers’ representatives would be meeting later in the day with Prime Minister Yair Lapid, expressing optimism that “by Sunday we can close all the details on the basis of our generous offer.” 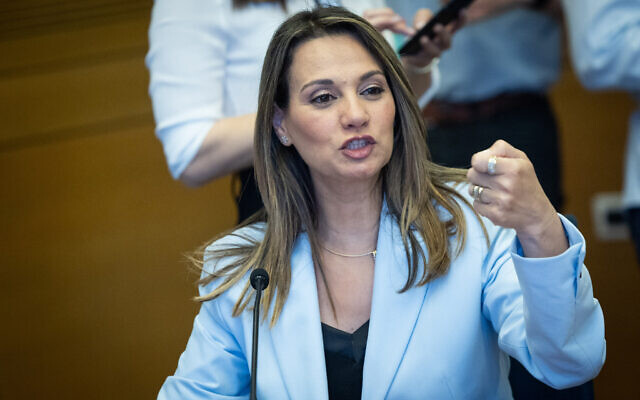 Education Minister Yifat Shasha-Biton attends a meeting of her New Hope faction, at the Knesset,in Jerusalem, on June 6, 2022. (Yonatan Sindel/Flash90)

The Teachers Union responded that “the vague proposal presented today to the public by the treasury is not familiar to us and wasn’t presented to us during the negotiation meetings held all week.”

Calling the proposal “embarrassing,” the union argued that it “harms education workers even more,” without elaborating.

Ahead of the press conference, dozens of Teachers Union members protested next to the Prime Minister’s Office in Jerusalem, saying they would hold regular demonstrations until the crisis is resolved.

The conclusion of the 2021-2022 school year was marred by a series of strikes organized by the Teachers Union over a wage dispute with the Finance Ministry.

On Thursday, union head Yaffa Ben David threatened that teachers would go on strike and prevent schools from opening next month, in an interview with the Ynet news site. 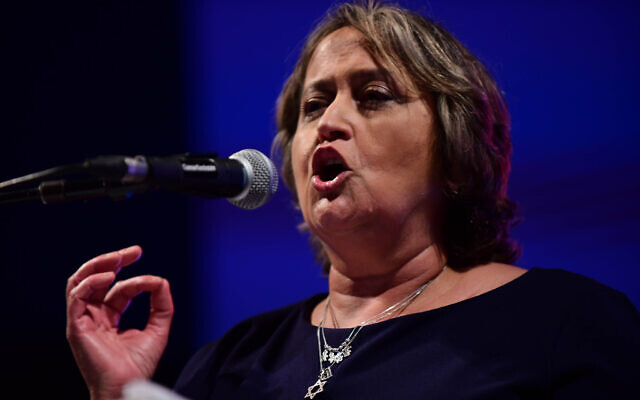 Yaffa Ben-David, head of the Israel Teachers Union at a protest by teachers demanding better pay and working conditions in Tel Aviv on May 30, 2022. (Tomer Neuberg/Flash90)

Negotiations for a new agreement are said to be stuck over a union demand that a system determining salary hikes based on rank and seniority remain in place. Some charge that the current seniority-based payment system discourages many promising young teachers from continuing in the profession, since it means their salaries don’t depend on the quality of their teaching and on the effort they invest in it.

The union is demanding that new teachers receive a starting salary of NIS 10,500 ($3,218) a month, and are also insisting on significant pay raises for more senior teachers.

Liberman has conceded that salaries for new teachers must rise, but also wants to increase the number of days schools are open and teachers are working, to help parents otherwise unable to find childcare. He also wants to allow school principals the ability to give raises to outstanding teachers in order to incentivize excellence within the profession.

The union is open to negotiating how much time teachers get off, but is demanding an agreement on salaries be inked before it will discuss incentive programs.

Michael Horovitz and Times of Israel staff contributed to this report.

Will Putin pull the trigger? Nuclear analysts try to get into Russian leader’s head

Man, 24, stabbed to death during brawl in Netanya

Broad support in US for nuclear diplomacy with Iran — poll

Once rising star of the right, Ayelet Shaked is now fighting for political survival

As Ayelet Shaked now seeks forgiveness, it might be that only Netanyahu can save her

As Shaked seeks right’s forgiveness, it might only be Netanyahu who can save her

‘School Ties’ at 30: How a film about antisemitism launched Brendan Fraser’s career

Iran denies girl, 16, was killed in protests as her death sparks new furor

At least 3 banks held up across Lebanon in one day, as rage mounts over cash limits

Balad party appeals its election disqualification to the High Court

Physicists from US, France, Austria share Nobel Prize for work on quantum science

In new push, government hopes to get Israelis to sort food waste from other trash