A mosque in Jerusalem was found burned on Friday morning in a suspected hate crime.

Firefighters who arrived at the scene in the city’s Beit Safafa neighborhood found graffiti attacking Arabs on a nearby wall.

There were no reports of any injuries and police said they have opened an investigation.

A photo from the scene showed graffiti in Hebrew that reads: “Destroying Jews? Kumi Ori is destroying enemies!” 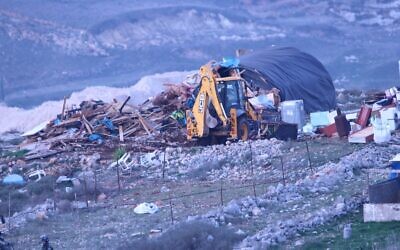 Kumi Ori is a flash point outpost neighborhood of the Yitzhar settlement in the West Bank.

The illegal neighborhood provided a “tailwind” for an increase in attacks on Palestinians and Israeli security forces in recent months, a security official told the Times of Israel last month.

The outpost is home to seven families along with roughly a dozen extremist Israeli teens known as hilltop youth. Earlier this month security forces razed a pair of illegally built settler homes in the outpost.

The IDF declared the wildcat community a closed military zone in October after a number of young settlers living there were involved in a string of violent attacks on Palestinians and security forces.

Anti-Arab vandalism by Jewish extremists has become a common occurrence in the West Bank and Jerusalem.

Incidents of vandalism against Palestinians and Israeli security forces in the West Bank are commonly referred to as “price tag” attacks, with perpetrators claiming they are retaliation for Palestinian violence or government policies seen as hostile to the settler movement.

Arrests of perpetrators have been exceedingly rare and rights groups lament that convictions are even more unusual, with the majority of charges in such cases being dropped.

Amazon delivering for free to settlements, but not to Palestinians – report

Right-wing religious parties renew pledge to back Netanyahu as PM

Rehabilitation pilot from prison and detention for minors starts

Conference of Presidents: Our Saudi trip is a ‘big step forward’ for Israel ties

Italian crooners and US rapper book performances in Israel

‘The day I realized that I was the Messiah’

Turkey tells Russia that attacks in Syria's Idlib must stop