Netanyahu: No further easing of virus restrictions until infections go back down

Prime Minister Benjamin Netanyahu said Thursday there won’t be any further easing of coronavirus restrictions until a recent spike in infections is flattened, and warned that the government will resort to reapplying lockdowns to achieve that goal.

Israel has seen a recent rise in coronavirus cases as it rolled back the lockdown measures it had begun in mid-March, which curbed the initial outbreak but also brought the economy to an almost total standstill. The government has repeatedly warned the public to continue to adhere to social distancing and hygiene orders amid concerns that a slacking of attitudes is allowing the spread of the virus to pick up pace anew.

“There is no doubt that we need to stop the disease,” Netanyahu said at a ceremony to install the new director general at the Health Ministry. “The disease is coming back and we have, for the time being, finished with opening up more of the economy.

“There is no substitute for changing the public’s habits,” he added. “If that doesn’t happen, we will be forced to take more aggressive measures. That includes lockdowns, breathing lockdowns, which we will begin immediately, and also general actions for the populace,” he said, without elaborating.

“We need to flatten the curve again and we will take the necessary steps so that this rise is halted,” he warned. 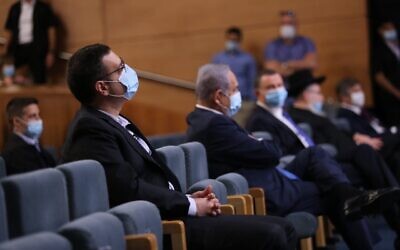 “At this stage there is the question of air travel, but we don’t intend to open anything anytime soon,” Netanyahu said.

Although some airlines have resumed flights, Israel continues to ban almost all non-Israelis from entering the country and requires returning nationals to self-quarantine for two weeks after arrival.

The ceremony at the ministry building saw Prof. Chezy Levy take over as Health Ministry director-general from Moshe Bar Siman-Tov, who led the initial response to the pandemic.

Health Minister Yuli Edelstein was also in attendance, as was his predecessor Yaakov Litzman, who was named housing minister when the new government was sworn in last month. Litzman has been criticized for appearing to let Bar Siman-Tov take the lead in dealing with the outbreak.

Netanyahu thanked Bar Siman-Tov for his handling of the virus crisis, saying that “at every opportunity when we spoke I always knew I would get precise information and a true statement of your best judgment.”

Edelstein also thanked Bar Siman-Tov, saying he was “the right man at the right time in the right place.”

“I won’t exaggerate if I say that the people of Israel certainly owe you thanks and, in many cases, an apology,” Edelstein said, referring to criticism that Bar Siman-Tov used exaggerated predictions of 10,000 virus fatalities to pressure the government to apply stricter lockdown measures. As of Thursday, 19,894 Israelis have been diagnosed with COVID-19, the disease caused by the coronavirus, with 303 deaths. 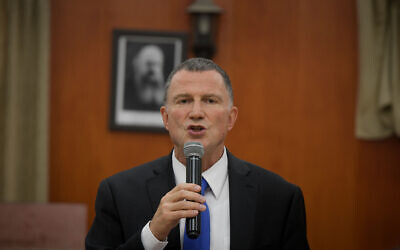 Health Minister Yuli Edelstein during a visit to the city of Bnei Brak on June 16, 2020. (Flash90)

“There were times when I felt that we were being sucked into a time tunnel, but with great faith that we can influence our fate,” Bar Siman-Tov said, recalling his experiences over the past few months. “The health system showed its full power and reached the peak of its ability.

“We made mistakes, we could have included more entities in our decision making,” he conceded, but he affirmed that the ministry’s actions had “saved the lives of thousands of citizens.

“We knew we would pay a price for success or failure; we preferred to pay the price of success,” Bar Siman-Tov added.

Netanyahu’s threats came as it was revealed that a worker at the Knesset was diagnosed with COVID-19 and a doctor in the Ichilov Hospital surgical department was also found to have the virus, sending 10 other staff members into quarantine as a precaution. According to the Kan public broadcaster, the doctor was apparently infected outside of the hospital.

On Wednesday ministers approved the resumption of train operations next week, even as the Health Ministry reported that newly diagnosed virus cases were still on the rise. The so-called coronavirus cabinet also approved the reopening of cultural venues, which could be permitted to open as soon as the weekend.

Trains and cultural events are among the last major aspects of local daily life that have remained closed as the lockdown as lifted.

Trains have been halted for three months and the date for resuming service has been postponed several times. They are now set to begin running again on Monday

Mourinho about the Amazon documentary: I don't like the feeling that I'm in Big brother
Aguero will not have time to recover for the match with Real Madrid
Marcelo will miss the rest of the season in La Liga due to an adductor muscle injury
Telephone Interview, disinfection of the rails, the ban lifts. We checked-antivirus measures in the NPL really work (well, almost)
David De Gea: I hope to play 400 more games for Manchester United
CAS returned to PAOK 7 points. AEK Carrera may not qualify for the Champions League
Pep Pro Champions League: Real Madrid will knock us out if Manchester City are thinking about the next stage
Source https://www.timesofisrael.com/netanyahu-no-further-easing-of-virus-restrictions-until-infections-go-back-down/

Haley to Danon: We fought for truth

'The Shining' on Jesus' turf: I stayed at a deserted hotel for Christian pilgrims

For many Israelis who grew up in apartheid South Africa, annexation brings a horrible sense of déjà vu

Mexican president thanks Trump for not mentioning border wall at summit

France's Macron asks Netanyahu not to proceed with annexation

The new normal… is not normal at all

Furloughed by the Jewish Burial Society

Netanyahu to Macron: Israel will abide by international law

The mysterious sixth sense that helps the body understand itself

Why the Philadelphia Eagles need to visit Auschwitz

In first, US sanctions senior Chinese officials over Uighur rights

California to sue US administration over international student guidelines

Trump claims European schools are 'open with no problems'

Israelis are victims of their own government

Pining for summer vacation but hobbled by the virus? Camping could be the answer