With just over a month remaining until Israelis head to the polls for the fifth time in less than four years, a television survey Wednesday indicated that the bloc led by opposition leader Benjamin Netanyahu was just short of the Knesset majority it needs to form a government.

Netanyahu’s bloc, made up of right-wing and religious parties, would reach 59 seats in the next Knesset, shy of the 61-seat majority needed to form a government. The bloc of coalition parties led by Lapid would reach 57 seats in this scenario.

The majority-Arab Hadash and Ta’al parties are unaligned with either bloc and running on a joint slate.

The poll presents a downturn for Netanyahu. The last poll conducted by Channel 12 estimated that Likud would reach 34 seats and gave Netanyahu’s bloc 61 seats in total, and other recent polls have projected similar results.

The national-religious Jewish Home party led by Interior Minister Ayelet Shaked — who recently requested forgiveness for joining the broad coalition last year and pledged to back Netanyahu for premier after November 1 — came up far short of the minimum 3.25% vote threshold in Wednesday’s poll, as did the Arab nationalist Balad, which split from Hadash and Ta’al earlier this month. 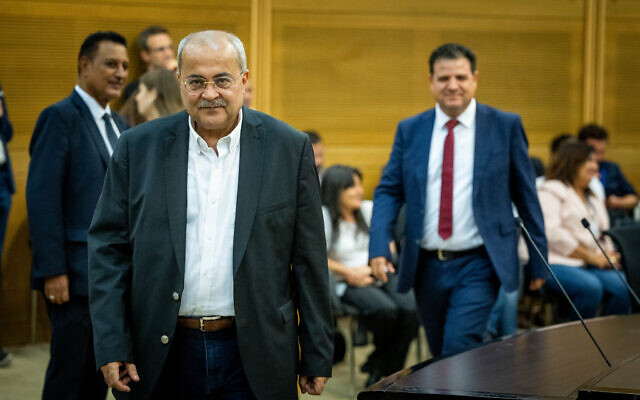 Members of the Hadash and Ta’al factions in the Joint List register their party for the upcoming elections at the Knesset, in Jerusalem, on September 15, 2022. (Yonatan Sindel/Flash90)

Noticing Shaked’s poor performance in the polls, the Likud party urged people to avoid voting for the interior minister’s party.

“Ayelet is not passing [the threshold], a vote for Ayelet is a lost vote,” a statement issued by Likud read.

Responding to the campaign against her, Shaked said: “Netanyahu, even you realize that I have a good chance of passing. So please, don’t offer me jobs, I didn’t join politics for that. I only work for the right-wing, let me do my job. You know I’m your last shot.”

Earlier Wednesday, Shaked rejected reports suggesting she was in talks to drop out of the race.

“There are no negotiations, it’s more spin,” Shaked told 103FM radio of reports that she was offered an ambassadorship to drop out. “It seems like Smotrich and his friends don’t have anything to sell or anything to offer because they spend all their time focused on me.”

The minister added that she “plans to run to the end.” 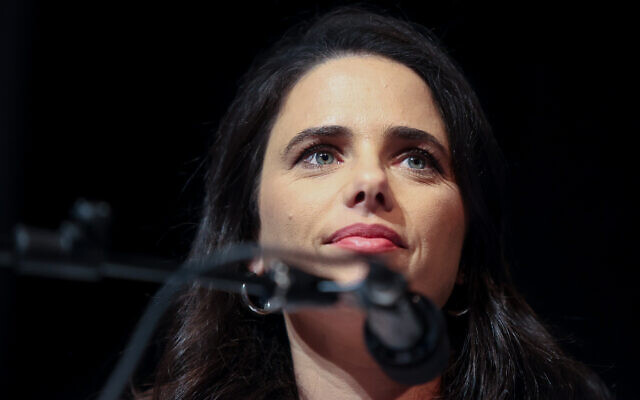 Israeli TV polls are often unreliable in predicting final results, but they can offer a general overview of public opinion.

Israel has been deadlocked politically since the elections in 2019 and is now entering its fifth election in under four years, with potential prime ministers having pinned hopes on pushing smaller parties to unite, keeping likely supporters from falling below the cut-off mark.

Netanyahu succeeded in brokering several alliances between smaller factions on his side of the political spectrum. Lapid has had much less success, with the refusal of Labor to run with Meretz posing a risk of one or both slipping below the threshold, and the last-minute splintering of the Arab parties’ Joint List creating a still bigger threat to his continued premiership.

The latest Channel 12 poll was conducted by pollster Manu Geva. It surveyed 504 respondents and had a 4.4 percent margin offer.