Outgoing Public Security Minister Omer Barlev warned Thursday that his successor could spark widescale Palestinian unrest if he tries to change the status quo at Jerusalem’s Temple Mount. Far-right MK Itamar Ben Gvir, set to take over the post in the coming weeks, has been a frequent critic of regulations at the Jerusalem holy site.

During a meeting summarizing the ministry’s conduct during his tenure, Barlev said he advised presumed incoming prime minister Benjamin Netanyahu to put someone other than Ben Gvir in control of the Israel Police, which currently falls under the jurisdiction of the Public Security Ministry.

“If there is a change in the status quo on the Temple Mount there will be a third intifada,” Barlev was quoted as saying by the Ynet news site. The first two intifadas, in the late 1980s and the early 2000s, were marked by deadly terror attacks against Israelis and clashes with troops on a near-daily basis.

“This is clear to me and also to Netanyahu, but we have seen that his considerations are frequently personal,” he charged, in an apparent reference to the Likud leader’s ongoing trial on corruption charges and accusations that he makes appointments based on narrow political interests rather than the needs of the state.

Ben Gvir has for many years — and also recently — slammed the status quo on the Temple Mount, Judaism’s holiest site and the third-holiest site for Muslims, who refer to it as the Al-Aqsa Mosque compound or the Noble Sanctuary. Non-Muslims are currently allowed to visit the site — during limited hours, from a single entrance point — but not to pray or display religious or Israeli national symbols. Those wearing clothes that identify them as religious Jews face heavier restrictions and are limited to walking a predetermined route under close police escort.

Despite his long-outspoken advocacy to allow Jewish prayer at the flashpoint site, Ben Gvir equivocated when asked during an interview Sunday if he would allow Jews to pray there. He called the ban “racist.” 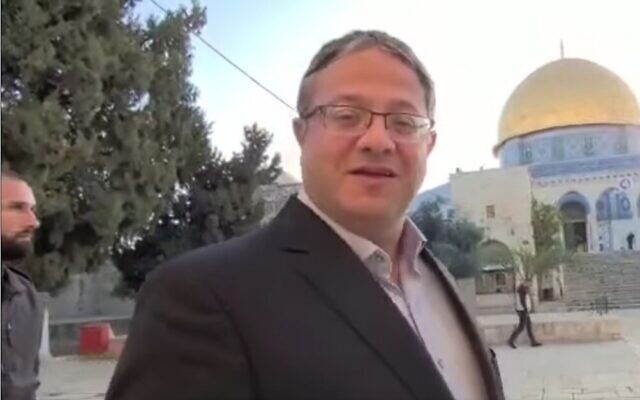 In his expected role as national security minister, a new post that will also be in charge of Border Police in the West Bank, Ben Gvir would have control over law enforcement on Temple Mount, where courts have given the police wide leeway to set policies aimed at maintaining public order.

Ben Gvir frequently visits the Temple Mount and has a long history of inciting violence and played a role in stoking tensions ahead of last year’s war between Israel and Gaza terror groups.

According to a recent report, Jordanian officials warned Israel that bilateral ties will suffer if Jerusalem’s new government tries to change the Temple Mount status quo arrangement. Jordan, the self-styled custodian of the holy site, also warned that a visit by Ben Gvir once he is a minister would be viewed in a harsh light.

At Thursday’s meeting, Barlev, the outgoing minister, also linked a number of high-profile violent incidents on Israeli streets to the strong showing for Ben Gvir and his electoral partner Bezalel Smotrich in the November 1 election.

“There is a growing phenomenon in Israeli society — there is room for the use of force as a way to solve problems,” he said, according to the Walla news site.

“The rise is not coincidental. This is what happens with the transfer of power and Ben Gvir’s entry to the ministry: Israeli society is becoming more and more violent,” Barlev added. 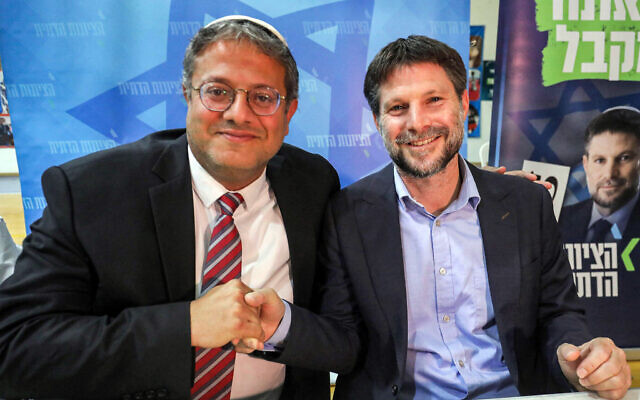 L-R: MKs Itamar Ben Gvir and Bezalel Smotrich at a rally of their Religious Zionism party in the southern city of Sderot on October 26, 2022. (Gil Cohen-Magen / AFP)

“He is a criminal who was convicted of incitement to terror and is going to sit in the minister’s chair. The problem is not the appointee, but the appointer,” said Segalovitz, a former senior Israel Police officer, in a rebuke of Netanyahu.

Ben Gvir later responded to Barlev, calling him “the most failed minister” and asserting that “crime became a national scourge” during his tenure.

“Barlev harmed everyone who lives in this country and instead of being ashamed of the damage he did, he is trying to blame me for his grave failures. Now that he’s going home will be much safer,” Ben Gvir tweeted.

Ben Gvir ran as part of the far-right Religious Zionism alliance, which has since split into three separate factions in a pre-planned move. All three of these far-right parties have inked coalition deals with Netanyahu’s Likud, which is still holding talks with a pair of allied ultra-Orthodox factions before it can form a government.

Ahead of weekend rallies, Lapid and ex-defense officials warn against ‘regime change’

Alarm grows over health of hunger-striking dissident jailed by Iran

Shlomo Perel, who hid in German army ranks to survive Holocaust, passes away at 98

What happens when a Holocaust denier moves into your cellar?