In a rare show of cooperation, Palestinian rivals Fatah and Hamas pledged unity against Israel’s West Bank annexation plans in a joint press conference Thursday, as signs emerged of a rift between Israel and Washington over the project.

The relationship between Fatah, which controls the Ramallah-based Palestinian Authority, and Islamist terror group Hamas, which rules the Gaza Strip, has been plagued by divisions for more than a decade.

The joint appearance was spurred by common opposition against US President Donald Trump’s controversial peace plan, which paves the way for Israel to annex all of its settlements as well as the strategic Jordan Valley, amounting to 30 percent of the West Bank.

“We will put in place all necessary measures to ensure national unity” in efforts against annexation, senior Fatah official Jibril Rajoub said in Ramallah at the press conference, also addressed by Hamas official Saleh al-Arouri by video-link from Beirut.

“Today, we want to speak in a single voice,” Rajoub affirmed.

Arouri described the conference as “an opportunity to start a new phase that will be a strategic service to our people in the most dangerous stages.” 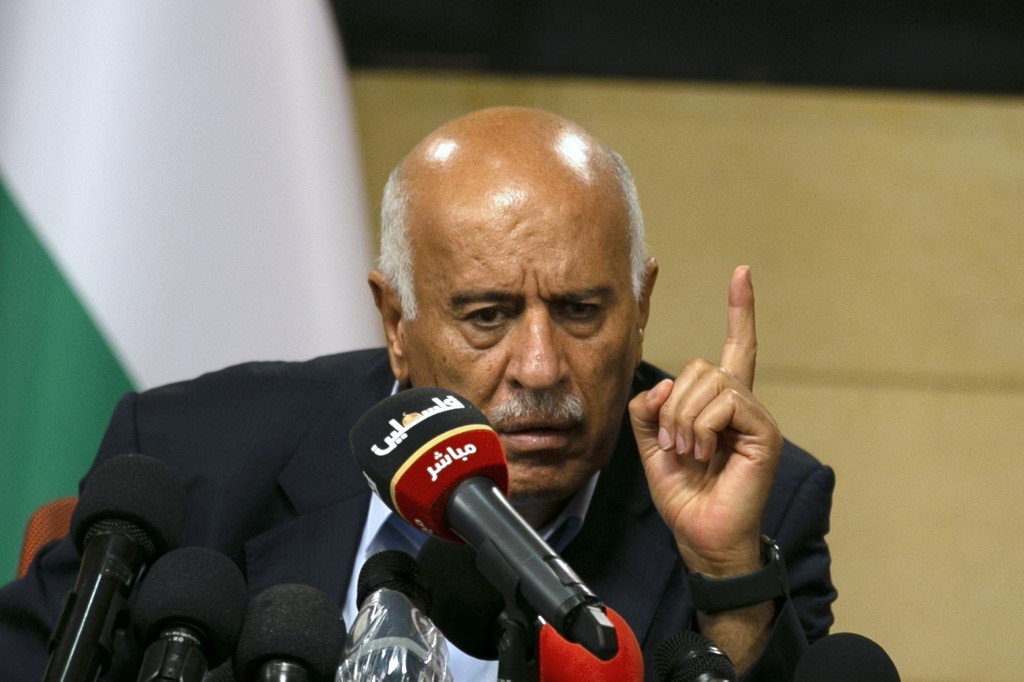 Hamas last month urged unity among Palestinians and “resistance” against Israeli plans to annex parts of the West Bank.

“We call for the annexation project to be confronted with resistance in all forms,” said senior Hamas official Salah al-Bardawil.

Arouri told Hamas-linked al-Resalah TV channel that “mass actions” are being planned “in all regions” in protest against Israel’s planned annexation of the West Bank.

Hamas is willing to work with any group to coordinate anti-annexation efforts, he said, including the Palestinian Authority.

“The PA should remove any fears that we will take their place in the West Bank. We only want to extend an outstretched hand to join in resisting the occupier,” al-Arouri said.

Deep divisions remain between Hamas and the PA, but Bardawil called for a “union of the political class.”

“It is the duty of each free Palestinian citizen to rise up against this flagrant aggression on our land,” he said.

Last month, the two rival Palestinian factions observed the 13th anniversary of their schism, which formally began when Hamas took over the Gaza Strip in June 2007 in a near civil war. The takeover dissolved the Hamas-Fatah unity government, and subsequent attempts to reconcile the two have borne little fruit

But on Wednesday, Netanyahu’s office said he will continue to discuss the possible annexation of parts of the West Bank with the US administration.

At the same time, Netanyahu convened top Israeli security brass, including National Security Adviser Meir Ben Shabbat, on Wednesday to discuss the issue, the statement said. “In the coming days there will be additional discussions,” the Prime Minister’s Office added. 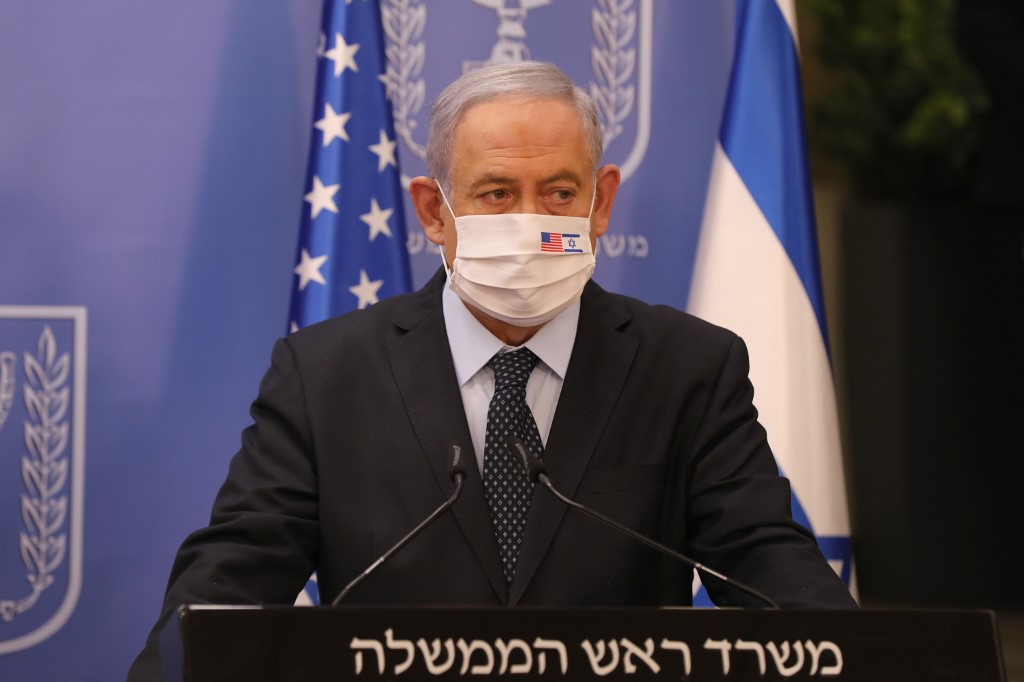 Prime Minister Benjamin Netanyahu wears a face mask against COVID-19, bearing the US and Israeli flags, during a press conference with US special representative for Iran (not seen) at the Prime Minister’s Office in Jerusalem on June 30, 2020. (Abir Sultan/POOL/AFP)

The statement came amid uncertainty over whether Israel will ultimately follow through on the annexation initiative, which has drawn fierce condemnations from some of Israel’s closest allies.

The US plan, unveiled in January, calls for any annexations to come as part of a larger peace package, including negotiations on the creation of a demilitarized Palestinian state across the roughly 70% of the West Bank that won’t be annexed by Israel, with a link to Gaza — a prospect that is untenable to many on the Israeli right.

The Trump plan also calls for talks with the Palestinians and buy-in from Gulf Arab states that would theoretically be tasked with providing massive funds for a nascent Palestinian state’s economy.

The US aside, the international community has voiced near-unanimous opposition against unilateral moves by Israel. Netanyahu held off on making an annexation announcement on Wednesday.

Beyond international opposition, Netanyahu has encountered resistance from his governing partners in the Blue and White party. Defense Minister Benny Gantz, the party’s leader, this week said the July 1 target date was not “sacred” and suggested that annexation could wait while the government grapples with Israel’s coronavirus crisis.

On Tuesday, Gantz said the Trump plan needs to be advanced “correctly, in bringing as many partners to this discussion from the countries of the region, with international backing.” He added: [We must] make every effort to connect with them and only then continue. And I think all means to bring in the players have not yet been exhausted.”

Coca: The win over Liverpool had a good impact on us. It is not easy to beat the European champion and the Premier League twice
Giovane Elber: Lewandowski is better than Messi now. Lionel is a genius, but this year Robert is unattainable
The head of the Belarusian Tribune was detained in Minsk. Max, we're with you
Karl-Heinz Rummenigge: FIFA is seriously thinking about awarding the Golden ball. I want Lewandowski to win
One Barca player among those starting the pre-season has contracted a coronavirus
Malinovsky settled in Italy: after the quarantine, he scored against Lazio and Juve, ahead of Mertens, Higuain and De Ligt in the ranking of the best players in Serie A
City are ready to give Coulibaly a 5-year contract with a salary of 10 million euros. Napoli wants 80 million for him^. Manchester City are working on the transfer of defender Kalidou Coulibaly from Napoli
Source https://www.timesofisrael.com/palestinian-rivals-fatah-hamas-pledge-rare-unity-against-israeli-annexation/

Defund the police – or buy them lunch? The debate raging within N.Y.'s Jewish community

LGBTQ+ flags put up after another homophobic incident in Ramat Gan

Israel's next generation will foot the bill for the coronavirus crisis

Attempt to smuggle balloons to Gaza thwarted by Tax Authority

Knesset rejects bill that would bar Netanyahu from forming government

Netanyahu prosecutor to be quizzed by inspectors for alleged building violations

Nazis should be punished

Rocket hits near US Embassy in Baghdad, no injuries reported

From Palestine to jail in Mauritius: When Britain deported 1,580 Shoah refugees

Nature reserves to be opened free of charge to welfare recipients

Amid upheaval in Lebanon, Israel takes calculated risk to reduce troops in north

US women’s groups say they will fight sexism, ‘ugly’ attacks on Harris

In Harris, Biden chooses a traditionally pro-Israel Dem as his veep candidate