Polar bears could be extinct by 2100 due to climate change, study warns

PARIS (AFP) — Climate change is starving polar bears into extinction, according to research published Monday that predicts the apex carnivores could all but disappear within the span of a human lifetime.

In some regions they are already caught in a vicious downward spiral, with shrinking sea ice cutting short the time bears have for hunting seals, scientists reported in Nature Climate Change.

Their dwindling body weight undermines their chances of surviving Arctic winters without food, the scientists added.

“The bears face an ever longer fasting period before the ice refreezes and they can head back out to feed,” Steven Amstrup, who conceived the study and is chief scientist of Polar Bears International, told AFP. 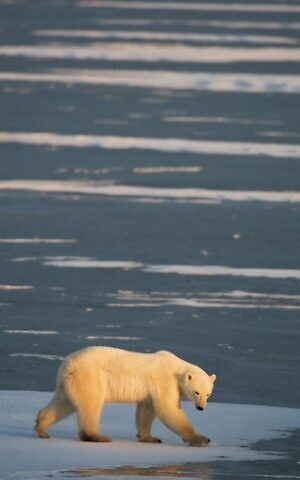 A Polar Bear walks on the shallow frozen waters while waiting for the Hudson Bay to freeze outside Churchill, Manitoba, Canada, November 14, 2007. (Paul J. Richards/AFP)

On current trends, the study concluded, polar bears in 12 of 13 subpopulations analyzed will have been decimated within 80 years by the galloping pace of change in the Arctic, which is warming twice as fast as the planet as a whole.

There is not enough data for six others to make a determination as to their fate.

“By 2100, recruitment” — new births — “will be severely compromised or impossible everywhere except perhaps in the Queen Elizabeth Island subpopulation,” in Canada’s Arctic Archipelago, said Amstrup.

One degree of warming so far has triggered a crescendo of heatwaves, droughts and superstorms made more destructive by rising seas.

But even if humanity were able to cap global warming at 2.4C — about half-a-degree above Paris Agreement targets, but hugely ambitious all the same — it would probably only delay the polar bears’ collapse.

“That is still way above anything polar bears have faced during one million years of evolutionary history,” said Amstrup.

The threat is not rising temperatures per se but the top-of-the-food-chain predators’ inability to adapt to a rapidly shifting environment.

“If somehow, by magic, sea ice could be maintained even as temperatures increase, polar bears might be fine,” Amstrup said by email.

“The problem is that their habitat is literally melting.”

Half of Earth’s land-based megafauna are classified as threatened with extinction, but only polar bears are endangered primarily by climate change.

But that status may not be unique for long, and should be seen as a harbinger of how climate will impact other animals in the coming decades, the authors warned.

There are approximately 25,000 Urus maritimus left in the wild today. 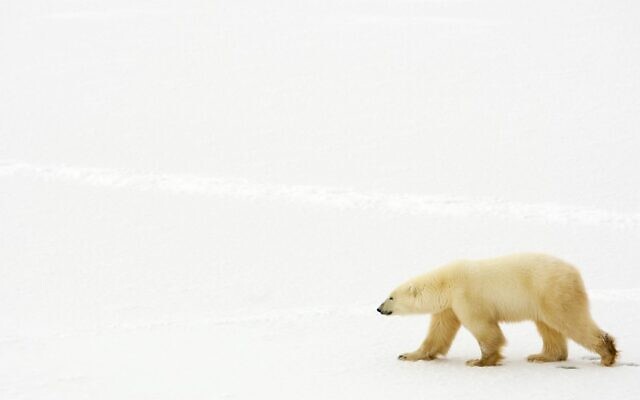 A polar bear walks in the snow near the Hudson Bay waiting for the bay to freeze outside Churchill, Mantioba, Canada, November 13, 2007. (Paul J. Richards/AFP)

The challenge to their survival has long been understood, but the new study — building on pioneering work by Amstrup a decade ago — is the first to put a timeline on their likely demise.

One is the expanding fasting period, which varies across regions and can last for half-a-year or more.

The other is a pair of climate change projections tracking the decline of sea ice until the end of the century, based on scenarios from the UN’s IPCC climate science advisory panel.

In a free fall

“By estimating how thin and how fat polar bears can be, and modeling their energy use, we were able to calculate the threshold number of days that polar bears can fast before cub and adult survival rates begin to decline,” said lead author Peter Molnar, a professor at the University of Toronto.

A male bear, for example, in the West Hudson Bay population that is 20 percent below its normal body weight when fasting begins will only have enough stored energy to survive about 125 days rather than 200 days.

New-born cubs are even more exposed, according to the study, especially when mothers have not fattened up enough to provide nourishing milk.

Females without offspring, however, have the greatest capacity to withstand long periods without food.

The polar bear’s “vulnerable” status on the IUCN Red List of endangered species — less severe that “endangered” or “critically endangered” — does not accurately reflect their plight, the authors argue. 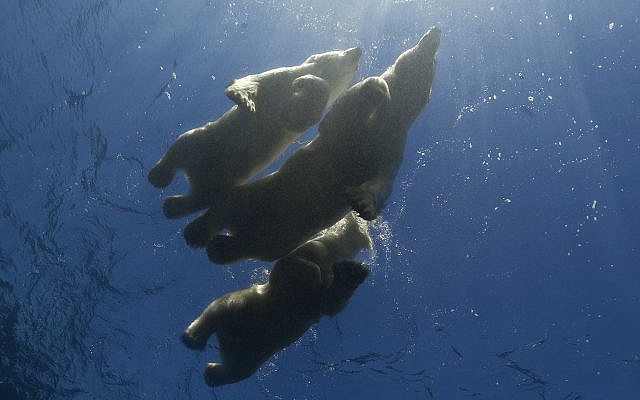 Categories established by the International Union for the Conservation of Nature are based mainly on threats such as poaching and habitat encroachment that can be addressed with local action on the ground.

“But we cannot build a fence to protect sea ice from rising temperatures,” said Amstrup.

“Think of it this way: If I were to push you off of the roof of a 100-story building, would your risk level be ‘vulnerable’ until you pass by the 10th floor?” he told AFP.

“Or would you be ‘endangered’ all the way down?”

Dire predictions for polar bears has led to the mulling of alternative solutions, such as captive breeding programs or airlifts to Antarctica, but there is no “Plan B.”

“The only way to save them is to protect their habitat by halting global warming,” said Amstrup.

Likud: Media is biased against the opposition

Amid fears of renewed fighting, Palestinians clash with police on Temple Mount

Between the Holocaust and the Nakba, two histories – and maybe a shared future

Global displacement from war, crises doubles in a decade — UN

Top US diplomat Blinken to travel to Germany, France, Italy next week

Temple Mount: Clashes break out between Israeli security and Palestinians

Bennett approves transfer of over 1 million COVID vaccines to Palestinians

EU studying Arab Israelis as a paragon of child vaccination, to help Europe

Back so soon? What the press is saying about a pesky ex-PM and Gaza fighting

Who are the candidates in Iran’s presidential election?

Podcast: 50,000 years ago, early man and Neanderthals had their first date

Likud proposes new law: Only leaders of 2 largest parties can serve as PM

Now that he's PM, Bennett needs to put Netanyahu in his place

Lod imam's attorney: Al-Baz does not support Hamas, did not incite

Iranians’ choice for president won’t affect the nuclear accord

Foreign Ministry: New 'No surprises' policy with US administration

At least 5 killed, 39 injured in gang brawl in Honduras prison

Blinken speaks to Lapid for second time in four days

Getting serious for a change, Jon Lovitz reflects on childhood, faith and Israel

Israel plans to raze a terrorist's family home. It doesn’t care he doesn't actually live there

The real meaning of denying the Jerusalem Flag March

End of ‘intel mapping’ is a start for IDF

'You can be gay in Russia – in secret. We wanted a normal life, so we moved to Israel'

Orthodox Union pressing Congress to stand up for Israel

Man against God: What explains the rise of atheism?