Pro-Palestinian activist Brad Parker on Friday said that Belgium rescinded an invitation for him to address the UN Security Council, which it currently chairs, after being pressured by Israel.

Parker, a senior advisor at Defence for Children International-Palestine (DCI-P) had been invited by Brussels to address the UN over allegations of rights abuses in Israel and the Palestinian territories.

Israel claimed he was too biased to address the forum and summoned Belgian diplomats to protest the invitation.

Parker told AFP he would no longer address the body after being informed that the parameters of the meeting had changed. 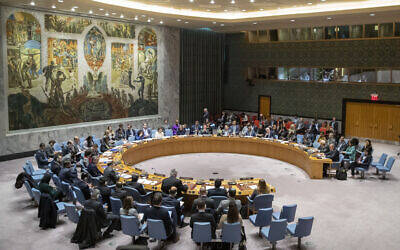 “What I have been told is on Monday the Belgian government has changed the briefing to be closed consultations, which effectively means I won’t be speaking,” Parker told AFP, adding he was “deeply frustrated.”

He said he had planned to give an “evidence-based statement” on “grave violations in Israel and the occupied Palestinian territories from 2014 to the end of 2019.”

“It is frustrating once again the political context has worked to silence our voice.”

DCI-P describes itself as working to protect “the human rights of Palestinian children.”

Israel says the NGO’s board includes individuals affiliated with the leftist Popular Front for the Liberation of Palestine, considered a terrorist organization by the European Union, the United States and Israel.

Israel’s ambassador to Belgium and Luxembourg, Emmanuel Nahshon, wrote on Twitter earlier this month that inviting Parker to speak created “unnecessary tension” that was “easily avoidable.”

Parker said the Israeli allegations against him were “an attempt to silence legitimate human rights work that exposes the reality for children impacted by Israeli military occupation.”

Israel summoned a top Belgian diplomat twice earlier this month over the issue, while the Belgian foreign ministry summoned Nahshon to censure him for retweeting a tweet critical of Brussels’s choice to invite Parker. 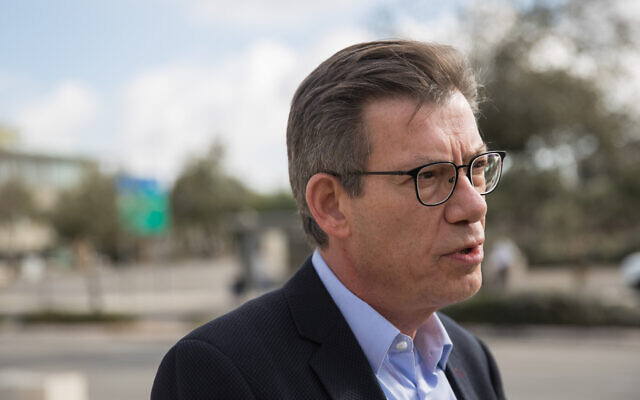 Emmanuel Nahshon outside the Foreign Ministry in Jerusalem on January 28, 2018. (Yonatan Sindel/Flash90)

Belgium took over the rotating presidency of the council this month and is using this privilege to invite speakers who, according to fuming Jerusalem officials, hold an extreme anti-Israel bias. They were especially outraged about Brussels inviting Parker.

Officials in Jerusalem and pro-Israel advocates accuse DCI-P of having an extreme bias against Israel, regularly accusing the Jewish state of committing war crimes.

Parker said in January 2019: “Israeli armed forces have regularly been implicated in widespread and systematic human rights violations against Palestinian children, yet systemic impunity is the norm.”

In 2015 — one year after Israel’s Operation Protective Edge against Gaza terrorists — Parker accused the Jewish state of violating international law and carrying out “indiscriminate attacks.”

Reached by The Times of Israel, Parker insisted that he does not support terrorism.

“I was asked to brief the council specifically on grave violations against children as part of the UN’s children and armed conflict agenda which includes the situation in Israel and the Occupied Palestinian Territory,” he wrote in an email.

“It is an evidence-based mechanism led by UNICEF on the ground in the OPT and my remarks, once heard, should not be controversial. These allegations are an attempt to silence legitimate human rights work exposing the reality for children impacted by Israeli military occupation.”

Gantz, have you no red lines at all?

Israeli health official says no return to normal after Passover

US ‘wasted’ months before preparing for virus pandemic

Even during the coronavirus crisis, Netanyahu spurns us 'non-Jews'

Zoom before the holiday, then turn off the tech: A seder guide

More than 200 coronavirus carriers evacuated to hospitals and hotels

Queen delivers message of hope to UK amid virus outbreak

The right man to detoxify Labour from Corbynist anti-Semitism

On which localities does Health Ministry wish to impose partial closure?

Jews prepare for a pandemic Passover: smaller but no less vital

How do you export cannabis in the time of coronavirus?

How a virus revived after 30,000 years differs from coronavirus

Gantz to ask President Rivlin for extension in forming government