Right-wing Israeli politicians reacted with cautious optimism to a flurry of reports in Hebrew media about the Trump administration’s plan to resolve the Israeli-Palestinian conflict.

An unsourced Channel 12 news report on Thursday included details of what would purportedly be in the plan, describing it as “the most generous proposal” ever presented to Israel.

According to the report, Trump’s peace plan provides for full Israeli sovereignty throughout Jerusalem, for Israel to annex all West Bank settlements, and for no significant “return” to Israel of Palestinian refugees.

It ultimately provides for a Palestinian state but under conditions that no Palestinian leader could conceivably accept, the report said.

Defense Minister Naftali Bennett said his right-wing Yamina alliance would “not allow land to be transferred to Arabs or for the establishment of a Palestinian state.”

“President Trump, [Jared] Kushner and Ambassador [David] Friedman are true friends of Israel. It is likely that Israel faces a historic opportunity, along with significant risks. The Yamina party will be vigilant,” he said in a statement.

Yamina’s Ayelet Shaked said “from the little we know about the plan, there are opportunities but also great dangers. We won’t allow the establishment of a Palestinian state and turn Jerusalem into” a community like those around the Gaza Strip. 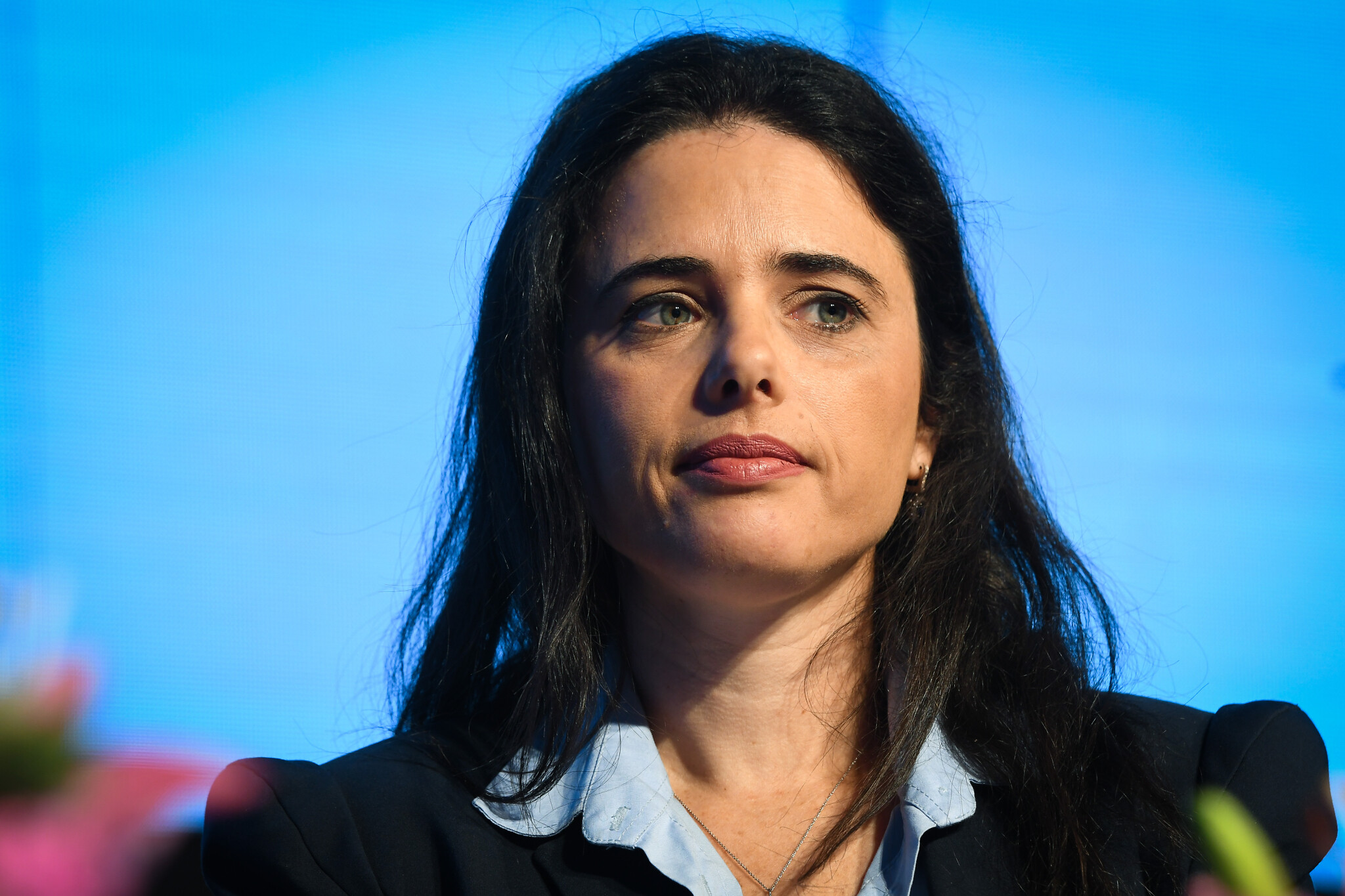 Jewish Home chairman Rafi Peretz said that his party would not permit the establishment of a Palestinian state.

“President Trump and the current American government are supporters of Israel and have already proved it. But in light of the publication of the ‘deal of the century’ we will clearly state: we will not allow” a Palestinian state, Peretz wrote on Twitter. “Our ancestral homeland is not up for negotiation.”

National Union head Bezalel Smotrich said: “From the little we know of the ‘deal of the century,’ there seem to be opportunities but also quite a few risks. We’re here to maximize the opportunities and neutralize the risks. One of the most important reasons that I went into public service was to protect the land of Israel and develop it and prevent it from breaking apart, with all my might. That’s what guides us now.”

National Union and Jewish Home merged with Bennett’s New Right party to form the Yamina alliance for the March election. The alliance previously ran together in the September national vote. 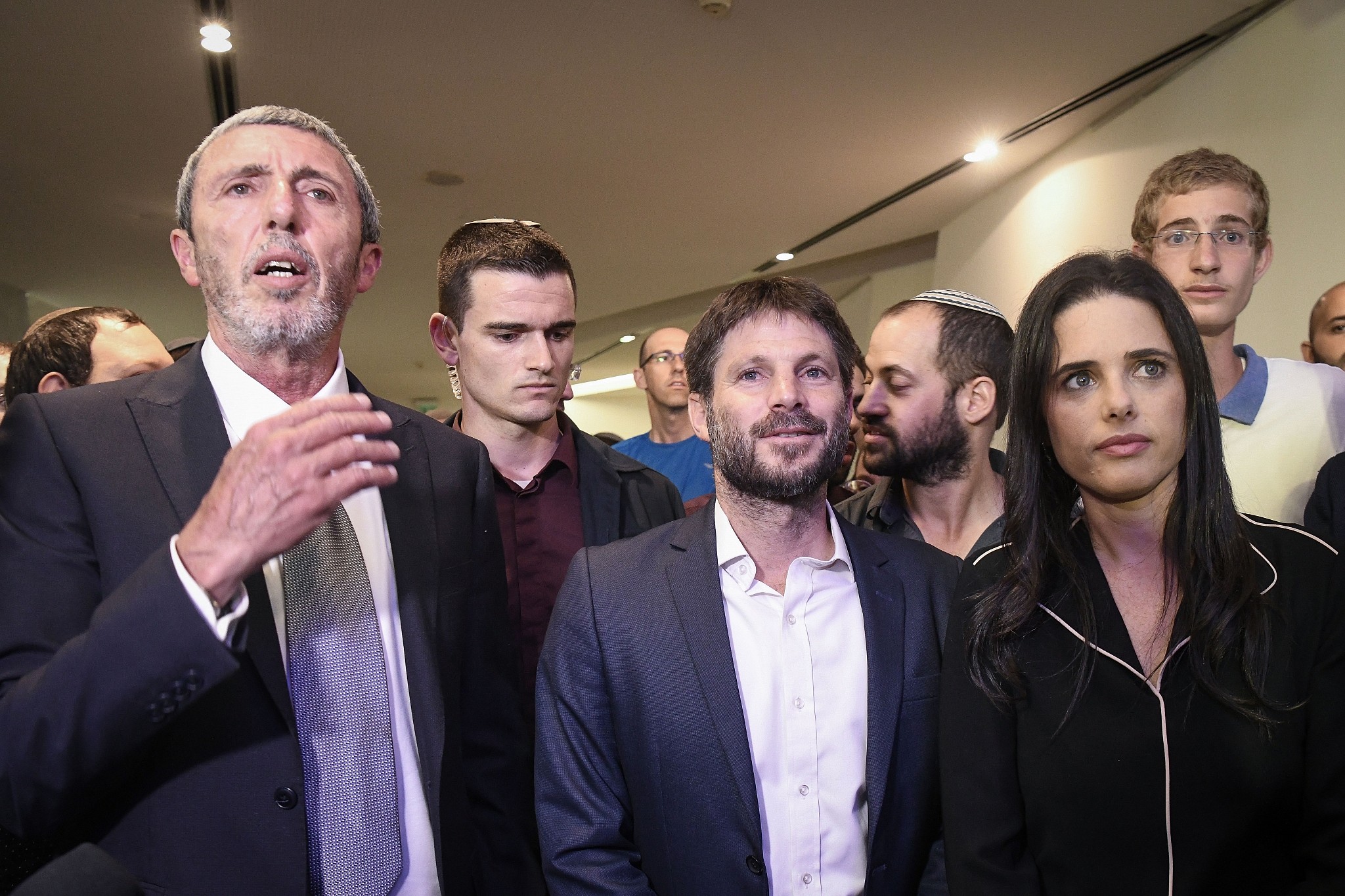 Left-wing politicians reacted to the purported plan with alarm and dismay.

Labor party head Amir Peretz said “our stance is clear: We see the importance of the US role as a mediator between us and the Palestinians, but the result of unilateral measures is deepening hostility and undermining security.”

“Israel needs to determine its own fate, get off the path to annexation and return to the path of peace,” Peretz said.

Meretz party chief Nitzan Horowitz said: “A true diplomatic plan is not presented as a gimmick a month before an election, and certainly not on the day of an immunity vote. That is not the way to advance peace, but the way to advance Bibi’s campaign,” referring to Prime Minister Benjamin Netanyahu by his nickname.

Netanyahu and Blue and White party chief Benny Gantz will travel to Washing to discuss the plan on Tuesday, the same day the Knesset is set to vote on establishing the committee that will weigh Netanyahu’s request to be protected from corruption charges in three criminal cases.

“The only way to peace is to negotiate directly with the Palestinians on a two-state solution. All delusions about annexation push peace away and put an end to the vision of a Jewish and Democratic state,” Horowitz said.

Labor and Meretz announced a merger earlier this month. Labor had previously merged with the centrist Gesher party ahead of September’s vote. 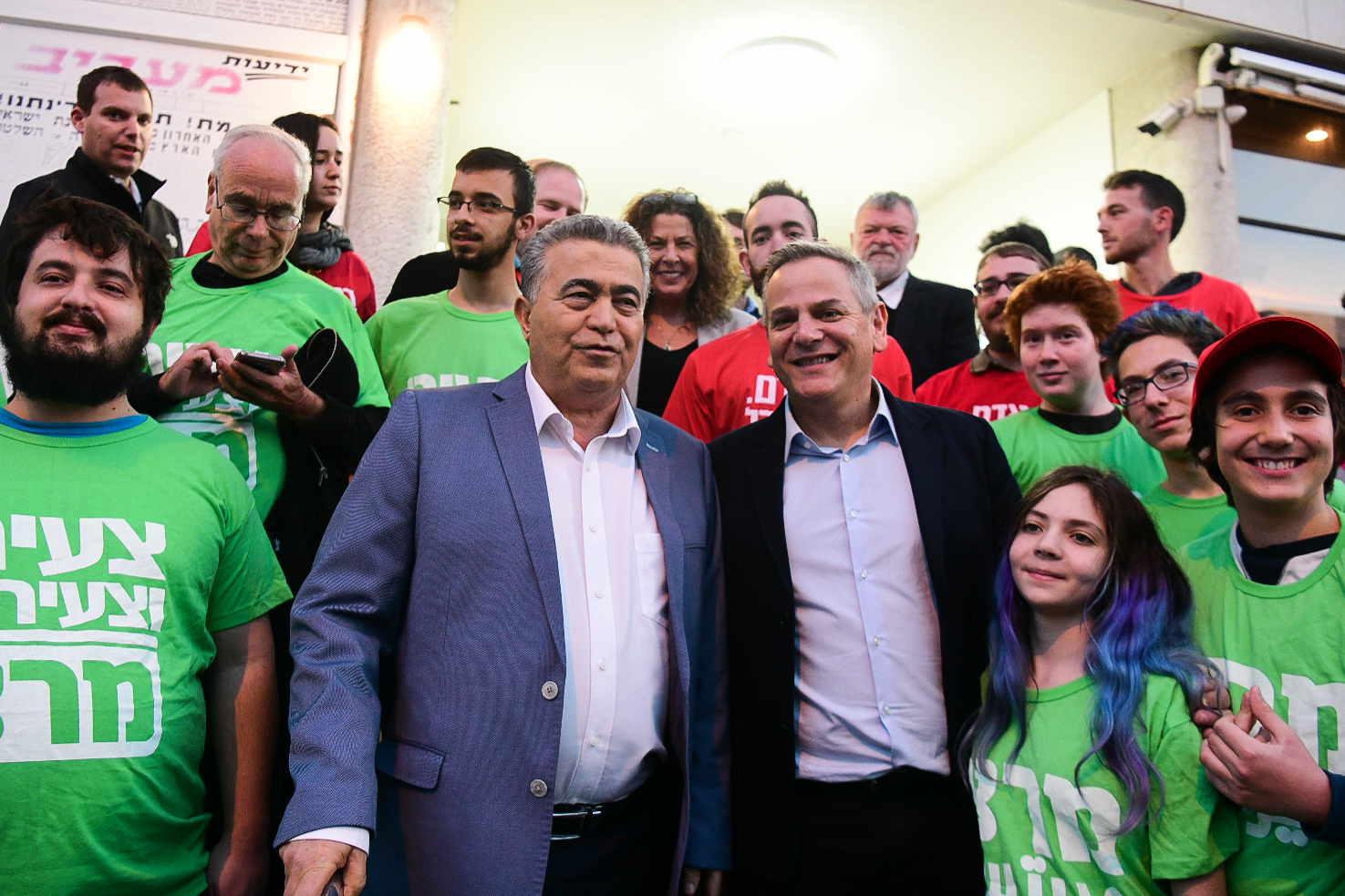 Ayman Odeh, head of the Joint List alliance of Arab-majority parties, said that “the true ‘deal of the century’ is a prime minister accused of corruption and a president under an impeachment trial trying to rescue each other with the help of a dangerous diplomatic move.”

Joint List MK Ahmad Tibi called the purported plan an “intervention of a foreign party in an Israeli election.”

Channel 12, citing unnamed Israeli sources, reported earlier Thursday that the US administration’s plan calls for Israeli sovereignty over Jerusalem and 100-plus settlements and the establishment of a Palestinian state on condition that the Hamas terror group gives up its weapons and the Palestinians recognize Israel as a Jewish state and Jerusalem as its capital.

The channel also reported that the US plan would grant Israel full security control in the Jordan Valley, and provide for some minor land swaps and a possible absorption of some Palestinian refugees in Israel; it also said if Israel accepts the plan and the Palestinians reject it, Israel would have US support to begin annexing settlements unilaterally.

The network reported that Palestinian Authority President Mahmoud Abbas does not know the details of the plan, and that it is regarded in Ramallah as “dead on arrival.” The PA has had no substantive dealings with the US administration since Trump recognized Jerusalem as Israel’s capital in December 2017.

The Channel 12 report quoted the Israeli sources as saying the plan represented an unprecedented offer for Israel. It said Netanyahu has ordered his ministers not to publicly discuss its provisions. 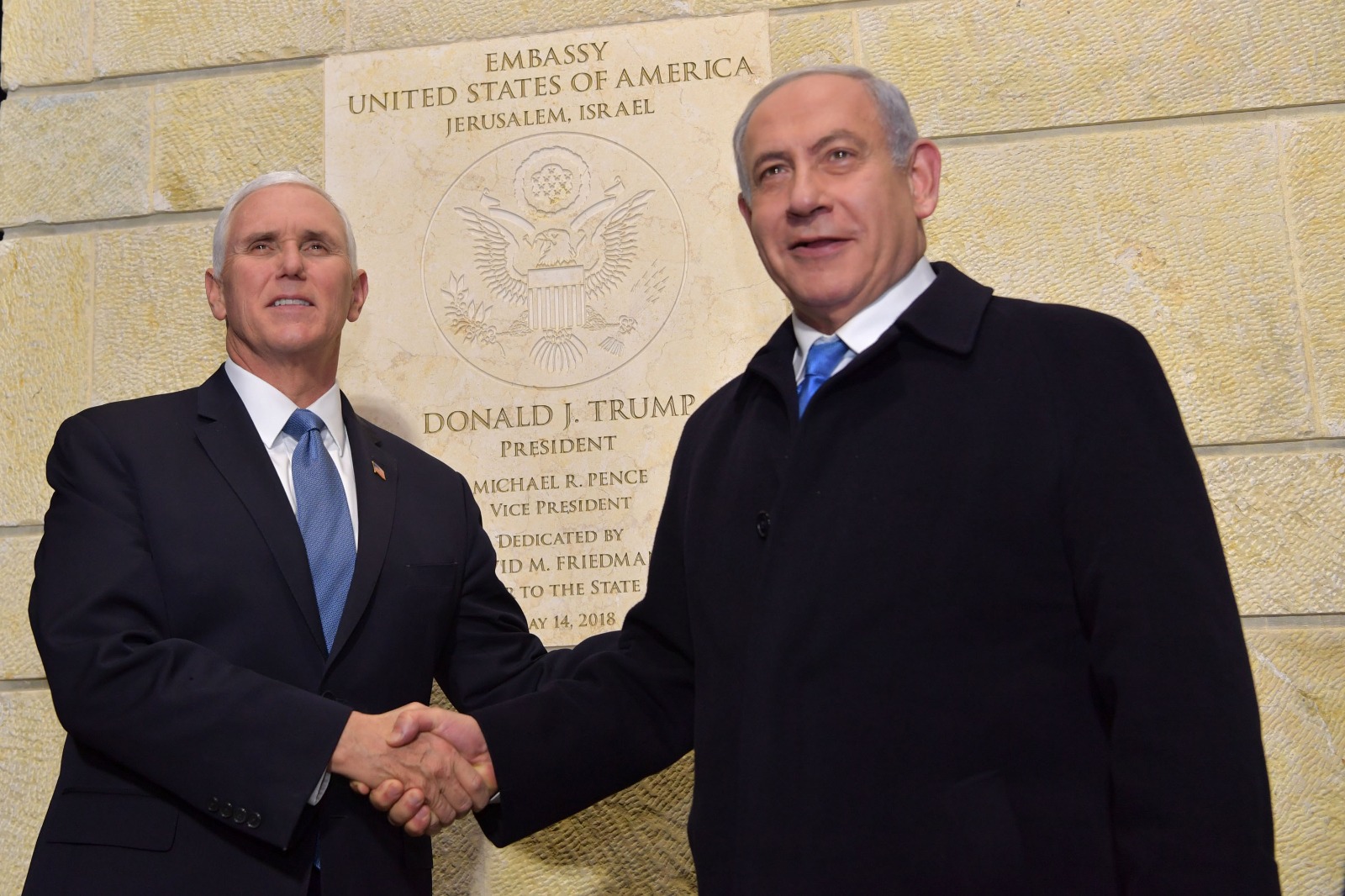 US Vice President Mike Pence confirmed that Gantz and Netanyahu would visit Washington, saying that Netanyahu would “come to the White House next week to discuss regional issues as well as prospects for peace here in the Holy Land.”

Pence added that he had invited Gantz at Netanyahu’s urging.

Later on Thursday, US President Donald Trump confirmed that Gantz and Netanyahu would visit Washington, but appeared to cast doubt on the reports in Hebrew media about the deal.

“Reports about details and timing of our closely-held peace plan are purely speculative,” he tweeted.

Trump did not specify which reports he was referring to, but some Hebrew media outlets on Thursday suggested the plan could be published next week.

The Blue and White party reportedly asserted that the White House was trying to help Netanyahu delay the Knesset from deliberating his request for immunity from graft charges by inviting him to Washington to discuss the peace plan.

“When [Knesset Speaker] Yuli Edelstein declared the deliberation will take place Tuesday,” a Blue and White source told the Haaretz daily, “we estimated he did so with the knowledge that Netanyahu and Benny Gantz would be invited to Washington on the same day.”

The source said that at this point, Blue and White had no intention to push off the immunity proceedings. 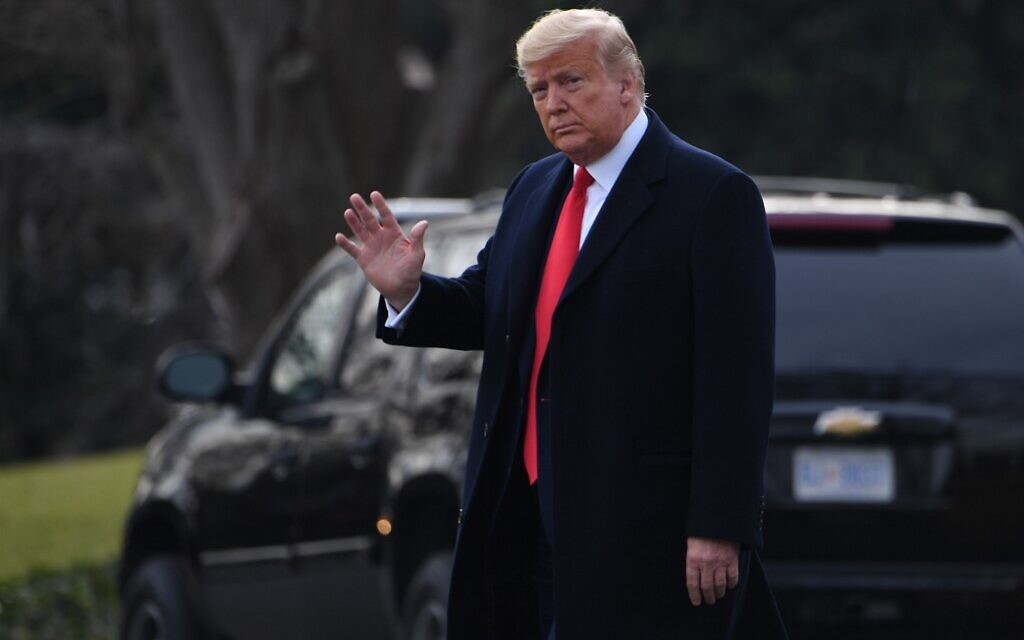 US President Donald Trump leaves for Doral, Florida, from the South Lawn of the White House in Washington on January 23, 2020. (Eric Baradat/AFP)

A Palestinian Authority spokesman warned Israel and the United States on Thursday not to cross any “red lines” with the plan.

“If the announcement of this deal, with these unacceptable formulas, is made, the leadership will announce a series of measures to preserve our legitimate rights, and we will call on Israel to assume its responsibilities as an occupying power,” Nabil Abu Rudeineh said in a statement, carried by the official PA news site Wafa, without stating whether he was referring explicitly to the Channel 12 report.

Hamas spokesman Hazem Qassim said that “any deal or project that does not contain our people’s full rights in our land and holy sites will not stand.

“All the attempts to make this deal come to pass will be squashed by our people’s resistance and steadfastness,” he said in a tweet. “Our Palestinian people will determine its fate by way of its ongoing revolution, legitimate struggle and absolute belief in the justness of its cause.”

A Channel 13 TV report set out slightly different conditions, but said these were from a year-old version of the plan, which had “since moved to the right.” That earlier plan, it said, provided for Israel to annex some 15 percent of the West Bank, for the Palestinians to have sovereignty in some East Jerusalem neighborhoods, and for 60 settlement outposts that Israel considers illegal to be evacuated.

IDF chief warns Gaza clash may not be over, could spiral into greater conflict

Police transfer officers after report on racism toward Ethiopian-Israelis

Weinstein jury back to work with signs of split over charges

No reason to delay elections over coronavirus, Netanyahu declares

Netanyahu dodges question on law that could stop his prosecution

Let’s do launch: 7 things to know for February 24

Minister Levin on sovereignty: We approach mission with determination

5 steps to a life-changing hiking experience