MOSCOW — Russia’s foreign minister on Thursday accused the West of becoming directly involved in the conflict in Ukraine by supplying it with weapons and training its soldiers.

Sergey Lavrov also said that Russia’s strikes on Ukrainian energy facilities and other key infrastructure that have left millions without power, heating, and water were intended to weaken Ukraine’s military potential and derail the shipments of Western weapons.

“You shouldn’t say that the US and NATO aren’t taking part in this war, you are directly participating in it,” Lavrov said in a video call with reporters. “And not just by providing weapons but also by training personnel. You are training their military on your territory, on the territories of Britain, Germany, Italy, and other countries.”

He said that the barrage of Russian missile strikes was intended to “knock out energy facilities that allow you to keep pumping deadly weapons into Ukraine in order to kill the Russians.”

“The infrastructure that is targeted by those attacks is used to ensure the combat potential of the Ukrainian armed forces and the nationalist battalions,” Lavrov said.

Ukraine and the West have accused Russia of targeting key civilian infrastructure in order to reduce morale and force Ukraine into peace talks on Moscow’s conditions. 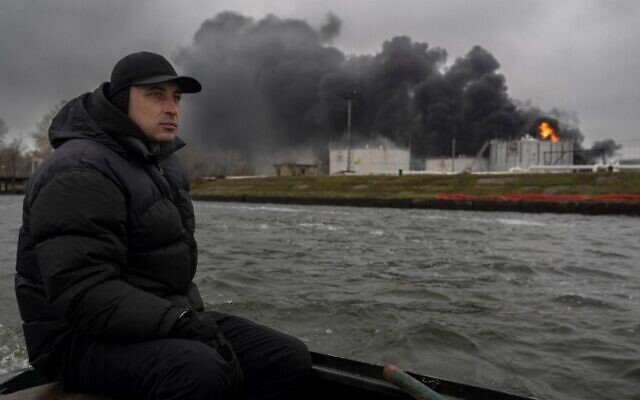 File — A fisherman sails his boat on the Dnipro River as black smoke rises after an attack on an oil reserve in Kherson, on November 20, 2022, amid the Russian invasion of Ukraine. (BULENT KILIC / AFP)

Lavrov insisted that Moscow remains open for talks on ending the conflict. “We never asked for talks but always said that we are ready to listen to those who are interested in a negotiated settlement,” Lavrov said.

The Kremlin has urged Ukraine to acknowledge Crimea, which Moscow annexed from Ukraine in 2014, as part of Russia and recognize other land gains that Russia has made since sending its troops into Ukraine on Feb. 24. It also has continued to push for guarantees that Ukraine wouldn’t join NATO, along with vaguely formulated “demilitarization” and “denazification” goals.

Asked if a meeting between Russian President Vladimir Putin and US President Joe Biden is possible, Lavrov responded that “we don’t shun contacts” but added that “we haven’t yet heard any serious ideas yet.”

Lavrov said that US Secretary of State Antony Blinken has raised the issue of US citizens imprisoned in Russia in a phone call, but noted that Putin and Biden agreed to set up a separate channel of communication between special services to discuss the issue when they met in Geneva in June 2021.

“It’s working and I hope that some results will be achieved,” he added.

The Biden administration has been trying for months to negotiate the release of WNBA star Brittney Griner and another American jailed in Russia, Michigan corporate security executive Paul Whelan, including through a possible prisoner swap with Moscow. 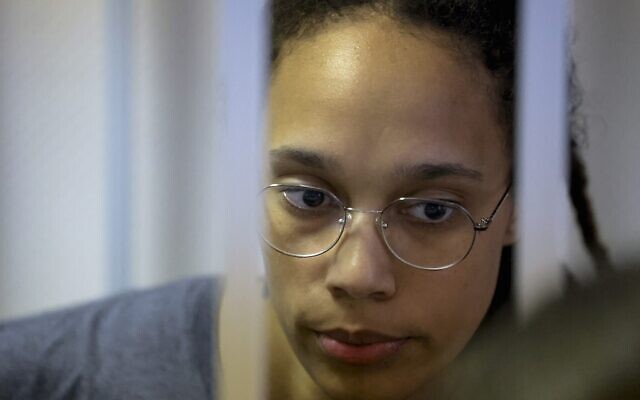 WNBA star and two-time US Olympic gold medalist Brittney Griner stands in a cage in a courtroom prior to a hearing in Khimki just outside Moscow, Russia, August 4, 2022. (Evgenia Novozhenina/Pool Photo via AP)

Commenting on Russia’s decision to postpone a round of nuclear arms control talks with the United States that was scheduled for this week, Lavrov argued that “it’s impossible to discuss strategic stability nowadays while ignoring everything that is happening in Ukraine.”

“The goal has been announced to defeat Russia on the battlefield or even destroy Russia,” he said. “How can the goal of defeating Russia not bear significance for strategic stability, considering that they want to destroy a key strategic stability actor?”

During the online news conference that lasted for 2½ hours, Lavrov ranted against the US and its NATO allies, accusing them of trampling on international law while trying to isolate and destroy Russia.

He claimed that the US has tried to discourage other countries, including India, from maintaining close ties with Russia, but those attempts have failed.

4 women indicted for allegedly attempting to smuggle drugs worth millions

In now annual tradition, US urges Israel to keep friction in check ahead of Ramadan