Speaking in New Hampshire, Pence was asked what went through his mind when he heard about the FBI search of Trump’s Mar-a-Lago home as part of a federal investigation into Trump taking classified records from the White House.

Pence, who like Trump is considering a 2024 presidential bid, said he has been troubled by what he called the politicization of the FBI. He also said the Justice Department and Attorney General Merrick Garland should be more transparent about what led authorities to conduct the search.

But Trump’s former vice president also had a message for the GOP.

“I also want to remind my fellow Republicans, we can hold the attorney general accountable for the decision he made without attacking the rank-and-file law enforcement personnel at the FBI,” he said at the Politics & Eggs event at St. Anselm College.

“The Republican Party is the party of law and order,” Pence continued. “Our party stands with the men and women who stand on the thin blue line at the federal and state and local level, and these attacks on the FBI must stop. Calls to defund the FBI are just as wrong as calls to defund the police.” 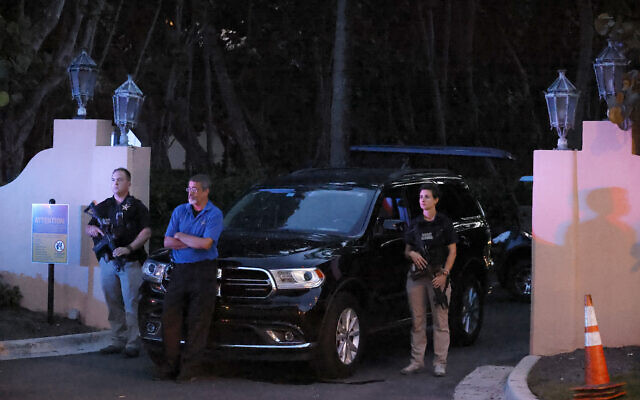 Law enforcement officials across the country have warned about an increase in threats and the potential for violent attacks on federal agents or buildings by Trump supporters who believe the FBI went too far in investigating the former president.

Trump blasted law enforcement and claimed FBI agents may have been “planting” evidence at his home during the search, without providing evidence. Republican lawmakers Marjorie Taylor Greene of Georgia and Josh Hawley of Missouri also both lashed the FBI following the raid.

A gunman died in a shootout after trying to get into the FBI’s Cincinnati office and calling for federal agents to be killed, following the search of Trump’s home.

FBI Director Christopher Wray, a Trump appointee, denounced the threats as he visited an FBI office in Omaha, Nebraska, last week, saying, “Violence against law enforcement is not the answer, no matter who you’re upset with.”

Times of Israel staff contributed to this report.