Israel’s security establishment is in a heightened state of preparedness as it deals with a record number of terror alerts in the lead-up to the Yom Kippur fast day, Hebrew media reported on Friday.

The Kan public broadcaster reported that the security officials have received more than 80 warnings or intelligence tips about possible terror attacks as Jewish Israelis prepare to observe the high holiday. The number is higher than the amount that was received last year.

The alerts come as Israel faces several security challenges amid the High Holiday season. Israeli troops have come under increasing gunfire during raids in the West Bank, and there have been repeated clashes this week between security forces and Palestinians in East Jerusalem and the Old City. Additionally, there have also been several failed shooting attacks targeting Israelis in the past week in the West Bank.

According to Channel 13 news, clashes have recently spread from hot spots of the northern West Bank cities of Jenin and Nablus to other areas of the West Bank that had until recently not experienced the escalation of violence, noting clashes in villages around Hebron in the southern West Bank.

Amid the rise in tensions, Palestinian Authority President Mahmoud Abbas convened a meeting this week with security chiefs in Ramallah, demanding action to control the violence. According to Channel 12 news, one of the officials said he couldn’t promise to control his troops and prevent them from committing attacks.

Earlier this month, an off-duty Palestinian security officer, Ahmed Abed, was killed in a firefight with Israeli soldiers. Maj. Bar Falah, 30, the deputy commander of the elite Nahal reconnaissance unit, was killed in the battle. 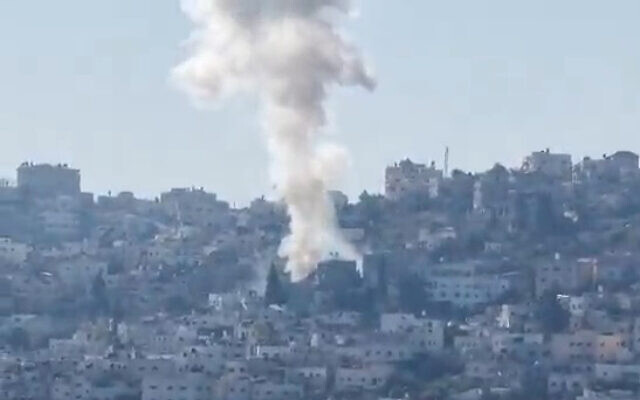 Smoke is seen rising from a home in the Jenin refugee camp in the northern West Bank, September 28, 2022. (Screenshot: Twitter)

According to Channel 12, the IDF has more than doubled its presence in the West Bank since the beginning of Operation Breakwater — launched in response to a wave of terror attacks that killed 19 Israelis between March and May this year — increasing the number of its battalions in the West Bank from around 13-14 to 26 in order to deal with the increased challenges.

The channel reported that the Defense Ministry is considering tightening movement for Palestinians over the upcoming Sukkot holiday, which could raise tensions even further.

Most of the dead have been wanted terrorists who opened fire, or youths who threw firebombs or stones at soldiers entering their neighborhoods. But several civilians who were not involved in any violence have also died.

On Thursday, a 7-year-old Palestinian lost his life in disputed circumstances during an Israeli army operation in the southern West Bank. The boy’s family says he died after being frightened by IDF soldiers, and possibly trying to run away, but an Israeli military spokesman insisted that the troops were not responsible for the tragedy.

And in the deadliest episode yet this year, four Palestinians were killed and 44 wounded on Wednesday during an Israeli military raid in the northern West Bank town of Jenin. IDF Chief of Staff Aviv Kohavi said the operation was successful in neutralizing a concrete terror threat.

The United States expressed its concern over the events on Thursday, and called for both sides to “contain the violence.”