Palestinian Authority President Mahmoud Abbas hosted Saturday a US delegation led by Assistant Secretary of State for Near Eastern Affairs Barbara Leaf, ahead of an expected visit by President Joe Biden next month, with an angry PA leader issuing a fresh call for Washington to uphold its promises to restore ties.

The meeting came less than two weeks after a phone call Abbas held with US Secretary of State Antony Blinken during which the PA president warned that he was on the verge of downgrading ties with Israel over the latter’s “violations in international law in East Jerusalem and the West Bank,” a Palestinian official told The Times of Israel on Saturday.

Abbas has become increasingly angry with the US administration in recent months over the perceived failure to roll back measures imposed by the Trump administration.

Leaf’s delegation is hoping to reassure Ramallah that Washington is still working to maintain prospects for a two-state solution, even as US officials clarified that they have no intention of launching a peace initiative in the foreseeable future.

But this may be deemed insufficient by the aging Abbas, who has long lost support from large sectors of the Palestinian public.

“The president [told Leaf] that the current situation is unsustainable and cannot be tolerated [given] the absence of a political horizon,” according to the PA’s official news site, Wafa. 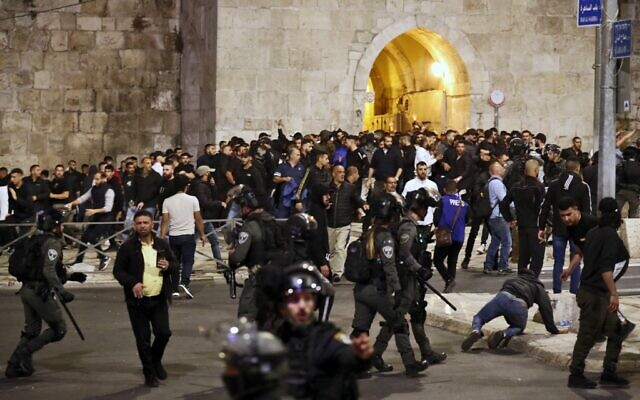 Israeli security forces clash with Palestinians following the funeral of Walid al-Sharif, 23, who died of wounds suffered last month during clashes with Israeli police outside Al-Aqsa Mosque on the Temple Mount, on May 16, 2022 (Photo by Ahmad GHARABLI / AFP)

Initial goodwill that the US and Israeli governments built with Ramallah last year has all but dissipated. In recent months. Biden restored diplomatic ties along with hundreds of millions of dollars in aid to the Palestinians within months of taking office and also announced that he would reopen the US consulate in Jerusalem — the de facto mission to the Palestinians that was shuttered by former president Donald Trump in 2019. But facing significant opposition from Israel’s fragile coalition, he has since held off on fulfilling the campaign pledge, infuriating the PA.

On Thursday, the US announced that it had restored a line of communication for the PA that had been cut by Trump. The unit that had once served independently as the Jerusalem consulate before it was folded into the US Embassy to Israel will once again report directly to Washington, instead of to the US ambassador to Israel, in a bureaucratic, yet symbolic step.

Refusing to be considered a subset of US relations with Israel, the PA has been largely boycotting the Palestinian Affairs Unit — now called the Office of Palestinian Affairs — and there were no indications after Thursday’s announcement that the policy in Ramallah would change.

The US has also been planning to name Deputy Assistant Secretary Hady Amr to the role of special envoy to the Palestinians in a further step aimed at boosting ties with the PA, but Abbas did not take well to the idea during his call with Blinken and it has since been put on hold, two US and Palestinian officials told The Times of Israel earlier this week.

Abbas’s office said he used the Saturday meeting to once again demand that the US reopen the consulate as well as the Palestinian Liberation Organization’s diplomatic mission in Washington. Biden pledged during his campaign to reopen the office that was shuttered by Trump in 2019. Abbas also called on Biden to scrap 1987 legislation deeming the PLO a terror organization — a step that would expose the Democratic president to criticism from rivals who demand that the PA reform its welfare policy, which includes payments to security prisoners and the families of attackers who have killed Israelis.

The PA’s ties with Israel have also deteriorated in recent months. The sides enjoyed a brief period of improved relations following the swearing-in of a new Israeli government last June. Abbas met several senior Israeli ministers and Jerusalem authorized record numbers of work permits for Palestinians from the West Bank and Gaza Strip in a series of other steps aimed at strengthening the PA. But those moves have become rarer in recent months as the right-wing flank of the teetering coalition has pushed for more aggressive policies in East Jerusalem and the West Bank. 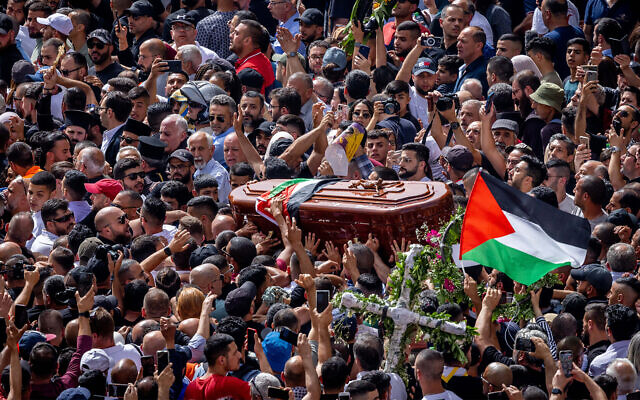 Last month, Israel advanced plans for roughly 4,500 settlement homes, a majority of which are located deep in the West Bank. The move came the day amid repeated clashes on the Temple Mount between Israeli police and Palestinians and a day after the killing of Al Jazeera journalist Shireen Abu Akleh — events that aroused significant anger on the Palestinian street. The PA blames Israel for the Palestinian-American reporter’s killing that took place during clashes between Israeli troops and Palestinian gunmen that broke out during an IDF raid of the northern West Bank city of Jenin. Israel says it can only determine who was responsible if the PA hands over the lethal bullet, which Ramallah has in its possession.

Leaf’s office tweeted after Saturday’s meeting that the sides discussed “the US-Palestinian relationship, US assistance to Palestinians, deepening ties and how Palestinians and Israelis alike deserve equal measures of freedom, security and prosperity.”

Leaf was accompanied by Amr and National Security Council Israeli and Palestinian Affairs Director Cynthia Cook, who will continue meetings with officials in Jerusalem and Ramallah for the next three days.

Biden is slated to visit Israel and the West Bank next month in a trip that is also expected to include a stop in Saudi Arabia. The tour was supposed to take place late this month but was delayed for what White House officials said were scheduling reasons.

Amid war, Israel sees threefold increase in immigration from Russia and Ukraine

Man suspected of threatening Lapid: ‘I want to murder you with a sniper rifle’

Around 50 missing after migrant boat sinks near Greek island

Large explosions rock Russian military air base in Crimea; at least one killed

Troupe questions if ‘Merchant of Venice’ is kosher for modern times

Israeli teen invited on stage to perform with Coldplay in Belgium

Facebook turned over messages to Nebraska cops ahead of teen, mom abortion charges

Crime boss arrested at airport upon returning to Israel

Cost of living, economy are top priority for voters in upcoming election — survey

The forgotten heroine of the 1975 Savoy Hotel terror attack

Mayor arrested on suspicion of bribery, fraud and breach of trust