US President Donald Trump on Friday falsely claimed a group of four Democratic congresswomen he has repeatedly attacked this week had referred to Jews as “evil.”

Speaking to reporters outside the White House, the president said of the four women: “They can’t call our country and our people ‘garbage.’ They can’t be anti-Semitic. They can’t talk about evil Jews, which is what they say. ‘Evil Jews.'”

None of the women has ever been documented referring to “evil Jews.”

The president may have been referring to Rep. Ilhan Omar tweeting in 2012 during a conflict in the Gaza Strip: “Israel has hypnotized the world, may Allah awaken the people and help them see the evil doings of Israel.”

That tweet has been condemned by many as anti-Semitic for its reference to hypnotism, and Omar later apologized for using that phrase. 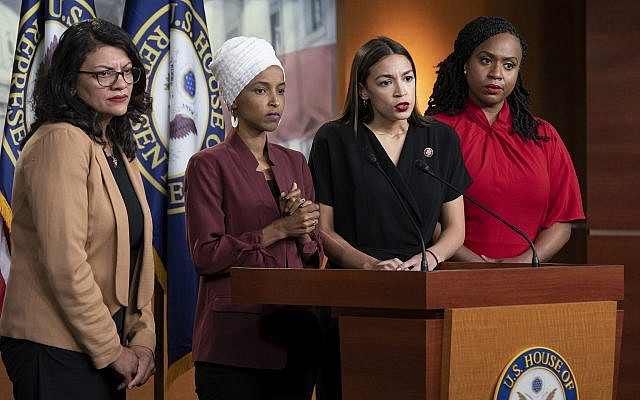 From left, Democratic representatives Rashida Tlaib of Michigan, Ilhan Omar of Minnesota, Alexandria Ocasio-Cortez of New York and Ayanna Pressley of Massachusetts respond to remarks by US President Donald Trump after his call for the four Democratic congresswomen to go back to their “broken” countries, during a news conference at the Capitol in Washington, July 15, 2019. (AP Photo/J. Scott Applewhite)

Trump was also misrepresenting the use of the word “garbage,” which Rep. Alexandria Ocasio-Cortez did not use to denigrate her country or its people. Rather, asked in March about her so-called radical socialist agenda, she said: “We’ve strayed so far away from what has really made us powerful and just and good and equitable and productive. And so, I think all of these things sound radical compared to where we are. But where we are is not a good thing. This idea of 10 percent better from garbage shouldn’t be what we settle for.”

As noted by several media outlets, Trump has himself in the past referred to “garbage in our society” and accused his predecessor of turning things to garbage.

Trump has in recent days repeatedly accused Omar, Ocasio-Cortez, Rashida Tlaib and Ayanna Pressley of being anti-Semitic and hating Israel, and in tweets later rebuked by the House as racist, called on the women of color to “go back” to their home countries — though all are citizens and three were born in the US.

Omar was accused of anti-Semitism in February after she said that American support for Israel was driven by money from the powerful pro-Israel lobbying group AIPAC. She was roundly condemned for those comments, including within her own party. In May, Tlaib sparked a similar firestorm after she claimed her Palestinian ancestors “had to suffer” for the Jews to have a safe haven in the wake of the Holocaust.

On Friday Trump renewed his attacks on Omar while reversing his previous criticisms of a North Carolina crowd who chanted “send her back,” defending them as “patriots” while again questioning the loyalty of the four lawmakers. 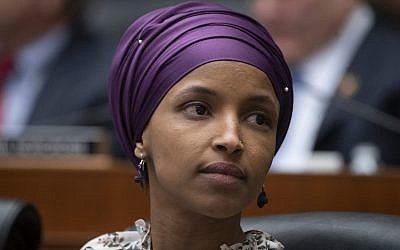 During the rally the crowd chanted “send her back” as Trump made no attempt to interrupt them. He paused in his speech and surveyed the scene, taking in the uproar, though the next day he claimed he did not approve of the chant and tried to stop it.

But on Friday, he made clear he was not disavowing the chant and again laced into Omar, the target of the chant. 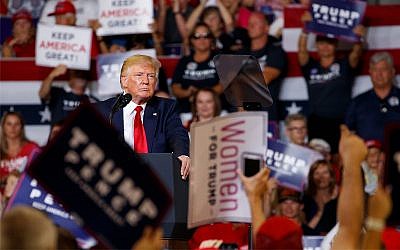 He also tweeted that it was “amazing how the Fake News Media became ‘crazed’ over the chant ‘send her back’ by a packed Arena (a record) crowd in the Great State of North Carolina, but is totally calm & accepting of the most vile and disgusting statements made by the three Radical Left Congresswomen.”

The chants at the Trump rally brought criticism from GOP lawmakers as well as from Democrats, though the Republicans did not fault Trump himself.

Citing Trump’s rhetoric, House Democrats said they were discussing arranging security for Omar and the three other congresswomen.

Кад Cadiz returned to La Liga after 14 years
Pioli about 2:2 with Napoli: One point is a good result
Gattuso on Milan's penalty: the Rule needs to change. Jumping with your hands behind your back is another sport
Milan will offer 25 million euros for Celtic defender Ayer
Klopp on plans: Four years at Liverpool. After that, I want to do nothing for a year
Rogers Pro 1:4 with Bournemouth: Leicester play well only 45 minutes after the break
Inter and Roma are Interested in Garay
Source https://www.timesofisrael.com/trump-falsely-claims-democratic-congresswomen-spoke-of-evil-jews/

Israel must be ready to live with virus for another year, finance minister says

Accused New Zealand mosque shooter to represent himself at sentencing

Netanyahu can’t divert attention from the coronavirus protests. It could be the beginning of his end

18 injured in explosion, fire aboard US warship at Naval Base San Diego

Fire breaks out at petrochemical facility in southwest Iran

China ‘strategic accord’ could give Iran $400 billion boost, up military ties

China ‘strategic accord’ could give Iran a $400 billion boost, up military ties

Russia ramps up bid to break up U.S. alliance with Syria's Kurds

US judge blocks execution due to victims' relatives' fear of attending

Trump administration 'concerned at no. of times Dr. Fauci has been wrong'

Seeds of hope: How tahini became a symbol of LGBTQ rights in Israel

Florida sets one-day record with over 15,000 new COVID cases, more than most countries

Polls: Most Israelis dissatisfied with Netanyahu’s handling of pandemic

4 foreign shows to watch on Netflix, including ‘Stateless’ and ‘The Twelve’

In major reversal, Sudan to decriminalize alcohol consumption for non-Muslims

Firefighters battle blaze on navy ship at San Diego base

Jordanian King claims that epidemic is now 'under control'

8 new virus deaths confirmed in 24 hours as infections leap by 1,206

Florida reports 15,000 new virus cases in a day, a US record

One-third of Israeli men have paid for sexual services at least once, survey finds