Both candidates in the race to replace Boris Johnson as Britain’s prime minister have expressed cautious openness to moving their country’s embassy to Jerusalem and recognizing the city as Israel’s capital.

Former chancellor Rishi Sunak and Foreign Secretary Liz Truss are competing to capture the leadership of the UK’s ruling Conservatives Party, after Johnson announced he would step down as faction leader and premier last month.

Addressing a Conservative Friends of Israel event on Monday, Sunak said Jerusalem was “indisputably the historic capital” of Israel and there was a “very strong case” for moving the UK embassy from its current location in Tel Aviv.

However, Sunak also expressed wariness over the delicate nature of the issue..

“All I would say is, having not been foreign secretary, there must be some sensitivities involved because if it was that easy, it would have been done by now,” he explained.

Earlier in August, Truss, the favorite to win the race, penned a letter to the Conservative Friends of Israel vowing to “review” the embassy matter: “I understand the importance and sensitivity of the location of the British Embassy in Israel. I’ve had many conversations with my good friend Prime Minister Yair Lapid on this topic.”

Neither candidate made a definitive commitment that they would go forward with the move should they make it to 10 Downing Street.

Candidates in the US and elsewhere have long teased moving their country’s embassy to Jerusalem in pitches to Jewish or pro-Israel voters, though follow-through is generally stymied by security concerns.

Palestinians claim part of Jerusalem as their future capital and most countries, Britain included, have refused to recognize the city as the seat of Israel’s government.

Britain was one of 128 countries that voted in favor of a United Nations resolution condemning US president Donald Trump’s decision to move the embassy to Jerusalem and recognize it as Israel’s capital in 2017. The resolution called on countries not to move their diplomatic missions to Jerusalem. 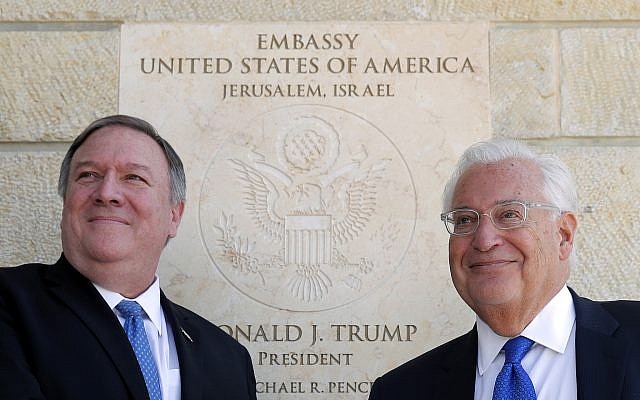 In this March 21, 2019 file photo, US Secretary of State Mike Pompeo and US Ambassador to Israel David Friedman stand next to the dedication plaque at the US Embassy in Jerusalem. (Jim Young/Pool photo via AP, File)

Three countries — Honduras, Guatemala, and Kosovo — have followed the US despite resistance from the international community.

Others, including the UK, maintain their lead missions in Tel Aviv.

Israel captured the eastern part of the city from Jordan during the Six Day War in 1967 and annexed it in 1980, in a move declared illegal under international law by the United Nations Security Council.

Results of the UK Conservative Party leadership contest are expected on September 5.

The unlikely rise – and remarkable endurance – of Ukraine’s Volodymyr Zelensky

Annexation vote wraps up in Russian-occupied parts of Ukraine

Iran steps up arrests of activists, journalists as crackdown on protests escalates