MOSCOW (AP) — Russian President Vladimir Putin on Friday cast his move to absorb four Ukrainian regions as part of an existential battle for Russia’s very survival against an aggressive West, a blustery show of his readiness to further up the ante in the conflict in Ukraine that has now entered its eighth month.

The fiery speech that Putin delivered before signing the treaties for the Ukrainian regions’ absorption into Russia marked some of his harshest criticism of the West to date. He accused the US and its allies of trying to bring Russia down on its knees and enslave its people, and he vowed to use “all means available” to fend off attacks — a clear reference to the country’s nuclear arsenals.

Putin’s televised speech took place at the opulent white-and-gold St. George’s Hall in the Grand Kremlin Palace and was frequently interrupted by applause from an obsequious audience of top officials and lawmakers.

After signing the accession treaties with the Moscow-backed leaders of the four regions, Putin linked hands with them in a show of unity. That was startling — unusually close physical contact for the 69-year-old Russian leader who has kept most of his interlocutors at a long distance since the start of the coronavirus pandemic.

In a sweeping attack on the US and its Western allies, Putin castigated their history of colonial gains, slavery, the destruction of indigenous people and cultures and other actions that he described as “running contrary to human nature, truth, freedom and justice.” 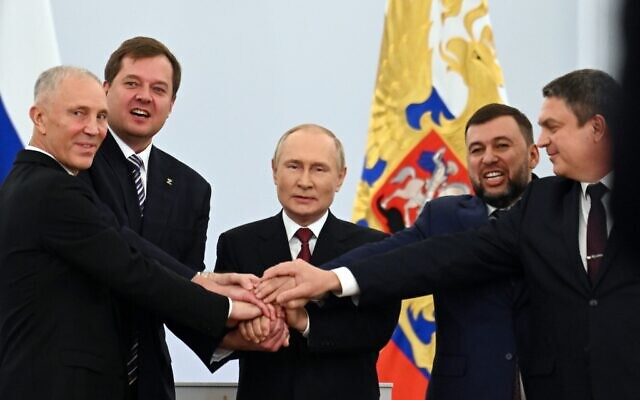 Putin denounced the US for carpet bombings during the Korean and Vietnam wars. He particularly noted that the US has been the only country to use nuclear weapons, dropping them on the Japanese cities of Hiroshima and Nagasaki in the closing days of World War II.

“They created a precedent, by the way,” Putin said in what some analysts saw as a veiled reference to his declared readiness to use “all means” to deter Ukraine from pressing on with its counteroffensive.

“The West has continued looking for a way to strike us, weaken and break up Russia,” Putin declared. “They simply can’t accept the existence of such a big, great country with all its territory, natural riches, mineral resources and the people who can’t and won’t follow someone else’s bidding.”

In a blunt statement, Putin also accused the “Anglo Saxons” — a term Russian officials use to refer to the US and Britain — of sabotaging the Russia-built Nord Stream 1 and 2 gas pipelines under the Baltic Sea to Germany. 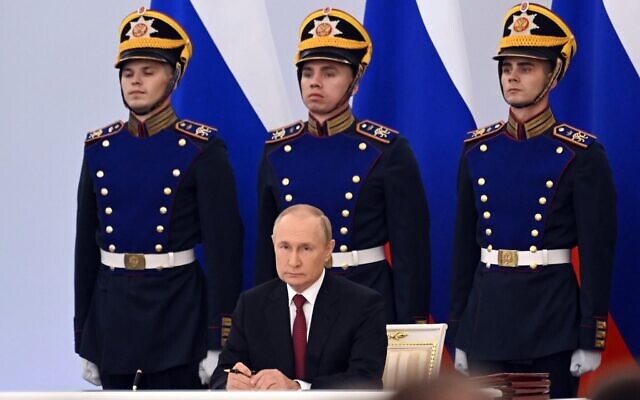 He didn’t name a specific country and didn’t offer any proof to back up his allegations. US President Joe Biden’s administration on Friday rejected Putin’s pipeline claim as “disinformation” designed to distract from his annexation of parts of Ukraine.

Putin described the US push for a rules-based world order as a hypocritical attempt to cover up the “US diktat based on crude force.”

“We hear them say that the West upholds the rules-based order, but where do these rules come from?” Putin said. “Those are ravings and plain cheating, double or triple standards intended for fools. Russia is a great country with a 1,000-year history, an entire civilization and it won’t live according to those forged, fake rules.”

He charged that the US troop presence in Germany, Japan and South Korea effectively amounts to their “occupation” and reminded the audience the US had eavesdropped on their leaders, saying it was a “shame not only for those who did it but also for those who slavishly swallowed that.” 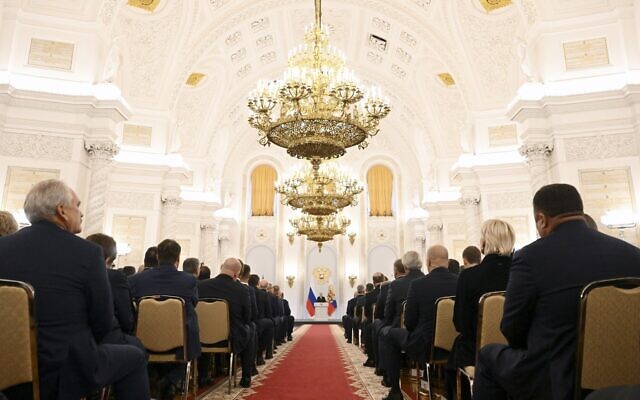 As part of his sweeping diatribes against the West, Putin also fired broadsides at Western gender policies that he described as “satanic,” citing the Bible to declare that “those poisonous fruit have become visible, not only to people in Russia, but also many in the West.”

The Russian president cast Western efforts to contain Russia as racist and discriminatory, charging that “the Russophobia articulated today across the entire world is nothing but racism.”

“Russia realizes its responsibility before the global community and will do everything to bring those hot heads to their senses,” Putin said. “It’s obvious that the current neo-colonial model is doomed.”

He described the showdown with the West over Ukraine as a “battlefield where our destiny and history have called us” to fight for the “great historic Russia, for future generations, for our children and grandchildren.” 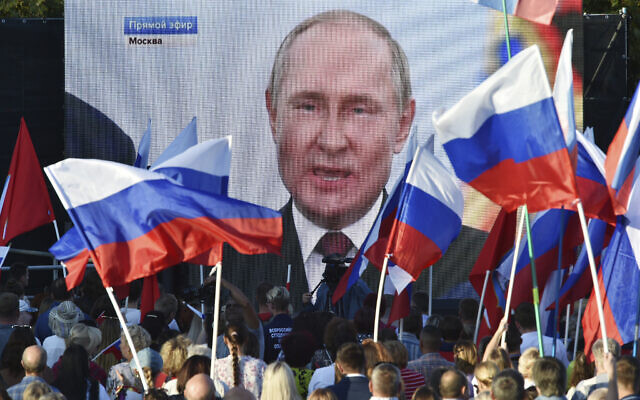 People watch on a large screen, as Russian President Vladimir Putin delivers his speech after a ceremony to sign the treaties for four regions of Ukraine to join Russia in Moscow’s Kremlin, during a meeting in Sevastopol, Crimea, Friday, Sept. 30, 2022. (AP Photo)

The Russian leader described his move to absorb the four Ukrainian regions as the restoration of historic justice, showing his contempt and disdain for Ukrainian statehood.

Putin claimed that “referendums” this week in the four regions in Ukraine — which the West says are completely illegitimate and took place under Russian occupation — reflected an “inalienable right of the people based on historic unity, the sake for which generations of our ancestors have won their victories.”

“Our common destiny and our 1,000-year history are behind the choice that millions of people have made,” he said.

He called on Ukraine to halt its counteroffensive — which has recaptured some territory in the northeast — and sit down for talks, but bluntly warned that the accession of the four regions into Russia is non-negotiable. That tough stance leaves no prospects for peace negotiations.

“People in the four regions are becoming our citizens forever,” Putin said, vowing that “Russia will not betray them.”

Report: Netanyahu prosecutor weighed quitting due to harassment, but stays for now

Report: Netanyahu prosecutor weighed quitting due to harassment, but staying for now

After Zelensky invitation, Kyiv has not talked to Israel about new food program

After stock crash, Talkspace in talks for acquisition at $200m valuation

Ben Gvir: Security forces should be able to shoot anyone holding stones or firebombs

Motorcyclist dies in collision with car near Herzliya

Leadership at its finest in Reichman University - Sponsored Content

Train services resume after hours-long glitch, no indication of cyberattack

‘Open up’: Anger against COVID lockdowns erupts across China, fueled by deadly fire