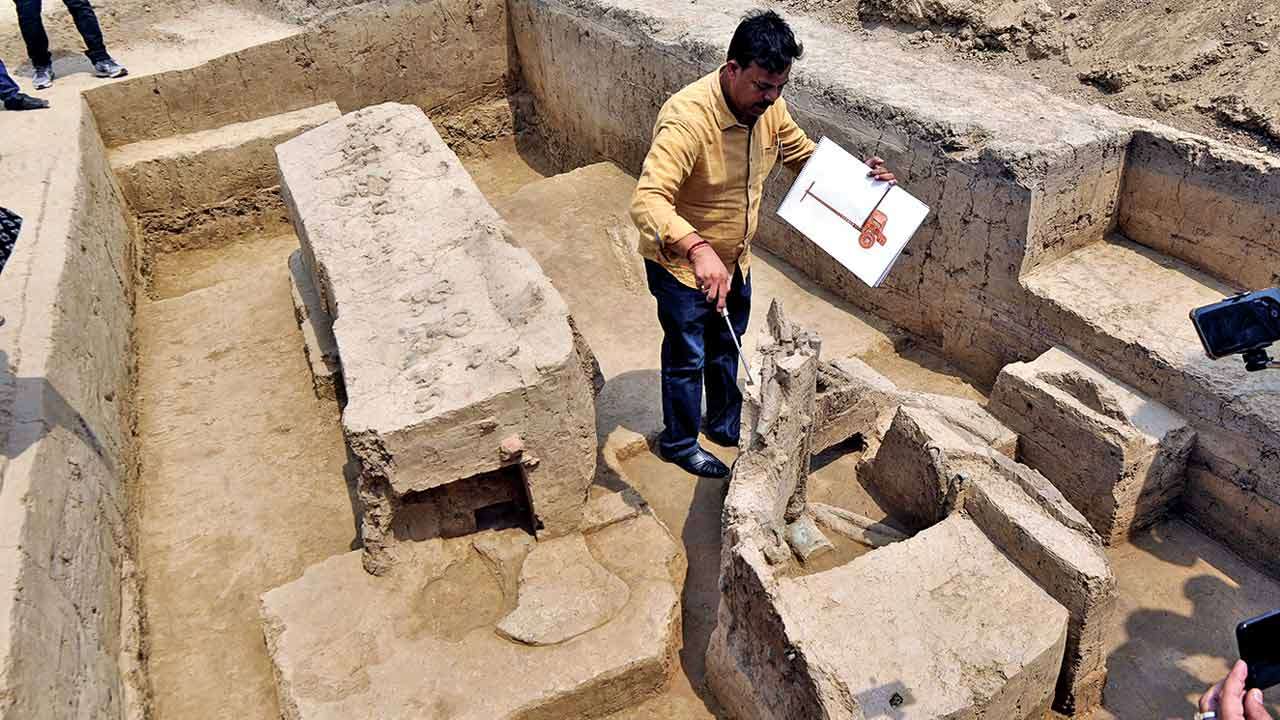 With the discovery of burial pits that hold the "first ever" physical evidence of chariots — supposedly from the pre-Iron Age — at the archaeological site of Sanauli in UP, experts believe they will be able to date the Mahabharata period. Alongside, it creates space for further inquiry into the origins of the horse in the Harappa Era. At the same site in Baghpat, 125 graves belonging to the Indus Valley Civilisation were found earlier that then led to a three-month long excavation of the area.

The excavation was conducted by a 10-member team led by SK Manjul, director of Delhi-based Institute of Archaeology and Arvin Manjul.

The excavation has unearthed eight burial sites and artifacts including three copper coffins, antenna swords, daggers, combs, and ornaments, among others. The coffin covers are decorated with eight anthropomorphic figures that are horned and with peepal-leafed crowns. But, what has baffled researchers is the discovery of chariots. "If there was a chariot in the Bronze Age (Pre-Iron age), it means there were animals to run it with — question remains whether it was a bull or a horse," Manjul said.

VITEEE 2020: Vellore Institute of Technology cancels entrance exam; admissions to be based on Class 12 scores

The Cong urged CM to quit and face investigation

Thalapathy Vijay's 'Master' will only release in theatres on Diwali or Pongal, confirms producer

Karnataka to promote intermediate semester students based on past academic record

Dubey was being taken to Kanpur without transit remand: M.P. police

Unfortunate we required Sushant Singh Rajput to commit suicide for people to realise this: Adhyayan Suman on 'groupism'

India.com Crosses 35 Million Users in May 2020, Grows 4.3x In Users Over Previous Year

Aishwarya Rai posts shoutout for husband Abhishek Bachchan on Breathe: Into the Shadows release — 'Shine on'

Chest-thumping over disengagement is premature: As volatility becomes new normal in India-China ties, get ready for a hotter LAC

HC to consider Swapna’s bail plea on next Tuesday

Swapna cannot be granted bail in a case charged under UAPA, NIA in HC

Astronomers spot mysterious objects in deep space, say unable to explain what it is

ISC 12th Board Results 2020: CISCE to announce scores on results.cisce.org today at 3 pm; check via SMS

CM expresses anguish over damage to temple and mosque