India
Trusted
The Times of India

NEET is a single entrance test for admissions to more than 66,000 MBBS and BDS seats across the country. This was the last NEET conducted by CBSE. From next year, the National Testing Agency will hold the exam.

Helped by a drop in cutoff marks, as many as 7,14,298 students cleared the test this year, up from 6,11,739 in 2017. This means over one lakh more candidates will have a chance of getting an MBBS seat this year.

Kalpana, the topper, secured 691 marks out of 720. Delhi topper Himanshu Sharma, who got the overall third position, secured one mark less (690). Another Delhi boy, Aarosh Dhamija, was ranked fourth.

There was a significant increase of 16.5 percentage points in the number of candidates who registered for the test, with a majority of the aspirants (56%) being girls.

Just as in the previous editions, this year’s exam too was dogged with controversies, be it inconsistencies in translation of the question papers in regional languages or alleged errors in answer keys and mission question papers. 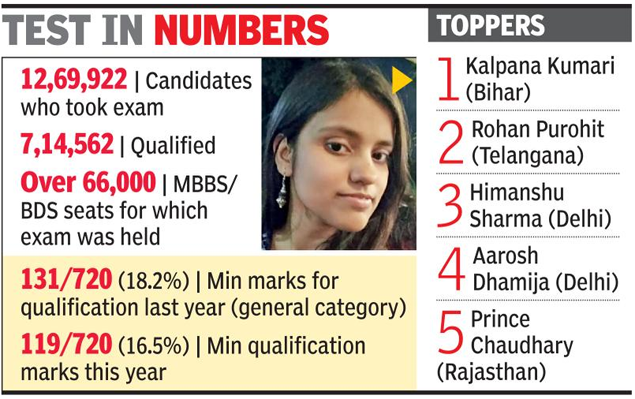 The exam was conducted in 13 languages and complaints were received from many states. West Bengal CM Mamata Banerjee wrote to Union HRD minister Prakash Javadekar alleging “gross irregularities” in the NEET-UG 2018. She said students were not provided question papers in their language on time.

The Calcutta high court on May 30, 2018, asked the NEET authorities to reserve a seat for an examinee till a regular bench decides her petition challenging the error-ridden Bengali question paper. Apala Debnath had moved the HC alleging that the Bengali version of the NEET paper had 180 mistakes, though the English version had none.

Students also moved the Madras high court alleging that a uniform question paper was not given and that there was a vast difference between the one in English and Tamil. There were 14 errors in the answer keys as well, they alleged.

CBSE has provided all India rank to the candidates. Now admitting authorities will draw merit lists based on the all India rank for MBBS/BDS seats in their jurisdiction. The Directorate General of Health Services will conduct online counselling for the 15% all-India quota seats, which include deemed universities, central universities, seats of ESIC Medical College and AFMC, BHU and AMU.

Exam topper Kalpana Kumari said she was taken aback with the top rank, though she was expecting to figure in the top five. “My sister checked my result and told me that I had secured the top rank. I had to ask her to double-check. Being a top ranker has been a totally amazing experience,” said the Bihar girl.

Kalpana was in Delhi for the past few months, staying with relatives after her Bihar board exams. “I want to get a seat in Maulana Azad Medical College. My focus is to complete the five-year MBBS, though I have not thought about what I would like to do beyond that,” she told TOI.

Aarosh Dhamija, one of the Delhi toppers did not make much of the ranking secured by him. “Everyone till rank 1,100 gets the same college. In fact, there are hundreds of students competing for the same spot, and it’s a matter of luck who gets ranked first,” he told TOI. “My aim was primarily to get a seat in Delhi, and I hope once the counselling and other procedures are over, I manage to stay home,” he said.

Aarosh, a student of Ryan International School in Rohini, already knew his score before the results came out, but was not expecting the high rank. He had scored 91.2% in his Class 12 boards, with 98 out of 100 in Biology.

Meghalaya Board Class 12 result 2020 to be declared soon, check @mbose.in.

Air India to resume flights to Delhi from Kozhikode

Is Modi afraid of expert advice?

Cow vigilantism, deconstructed: What Gau Premi, a new documentary, found by trailing a group of 'rakshaks' in Gujarat

Close aides of gangster Vikas Dubey killed while trying to flee from custody, says UP police

Tablighi Jamaat-Markaz Case: None of 956 Foreigners to be Charged for Culpable Homicide, Clarifies Police

Resurrection: Ertuğrul, currently on Netflix, far exceeds its reputation as a ‘Turkish Game of Thrones'

151 trains proposed to be run by private operators, would ply in addition to existing capacity: Railways

Close aide of gangster Vikas Dubey killed while trying to flee from custody, says UP police

News18 Daybreak |India's Covid-19 Death Toll Reaches 20,642; Sholay Actor Jagdeep Passses Away and Other Stories You Need to Watch Out For

MBOSE HSSLC result 2020 Date: Class 12 results likely to be out today at 9 am; alternate websites to check scores if mbose.in is slow

MBOSE HSSLC result 2020 Date: Marks of over 30,000 students to be announced today at mbose.in; check scores via SMS

Delhi: Fire breaks out at warehouse in Mundka area

Instagram launches 'Reels' as alternative to TikTok; here's how to use it

'Doesn't give your father license to throw chappals at her': Kangana Ranaut slams Pooja Bhatt after 'launch' reminder

Coronavirus | How Bengaluru fell short in tracing the source of infections