Friday, 14 August 2020_Israel and the United Arab Emirates (UAE) have reached a deal that will lead to a full normalization of diplomatic relations between the two sides, in an agreement that US President Donald Trump apparently helped broker. 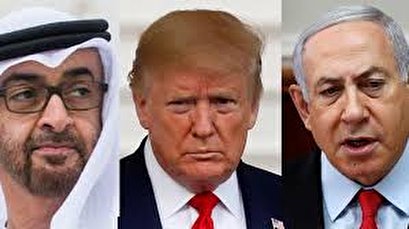 Under the agreement announced on Thursday, Israel has allegedly agreed to suspend applying its own rule to further areas in the occupied West Bank and the strategic Jordan Valley that Prime Minister Benjamin Netanyahu had pledged to annex, senior White House officials told Reuters.

Trump, in a tweet, called the agreement a "HUGE breakthrough," describing it as a "historic peace agreement between our two GREAT friends."

US Secretary of State Mike Pompeo, who spoke to reporters accompanying him on a trip to central European countries, said for his part that the agreement was an "enormous" step forward on the "right path."

Abu Dhabi's Crown Prince Sheikh Mohammed Bin Zayed said on Twitter on Thursday that an agreement had been reached on normalising relations between the two countries.

The deal, however, has elicited sharp negative reactions from various Palestinian groups as well as their supporters from across the world.

The Palestinian Islamic Jihad Movement reacted rapidly by condemning the deal between the UAE and Israel.

The movement noted that normalization of ties between Tel Aviv and Abu Dhabi was a sign of submission on the latter’s part without having any effect on reducing conflicts in the occupied Palestinian territories.

Islamic Jihad movement also noted that the deal will, on the other hand, further embolden the Israeli occupiers.

Atletico defender Jimenez has contracted the coronavirus. The club canceled morning training as a precaution
Canidia about Messi: Leo gets lost and suffers when his team is not the best on the field
Lampard confirmed that goalkeeper Mendy is undergoing a medical at Chelsea
Neymar and defender Marcel Gonzalez can get up to 10 matches suspended
Manchester City - the first Premier League club to win the 1st match in 10 consecutive seasons
Bartomeu has suspended Suarez's transfer to Atletico. He doesn't want to let a player go to a competitor for free
Robinson on bale: one of the 10th anniversary deals for Tottenham and a world-class player
Source https://www.yjc.ir/en/news/47431/israel-uae-reach-us-brokered-agreement-to-establish-full-diplomatic-ties