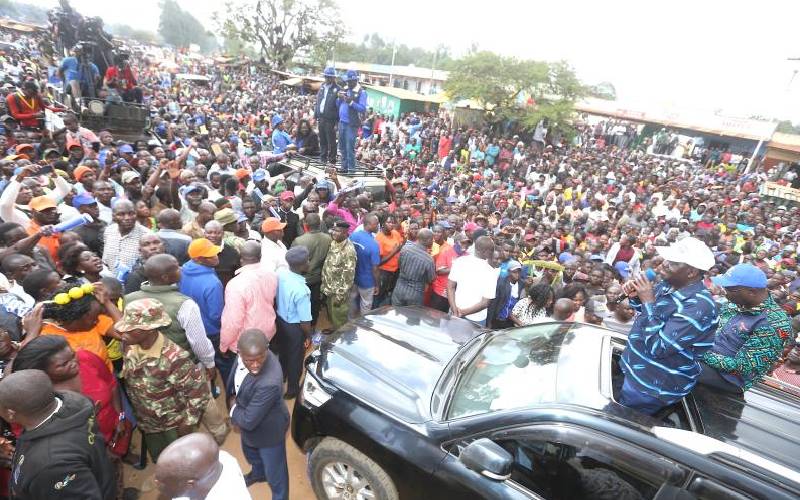 The ODM party leader and his team said the time is ripe for reforms under the Azimio ticket, which has former Justice Minister Martha Karua as running mate.

Governors Wycliffe Oparanya (Kakamega), James Ongwae (Kisii) and Wycliffe Wangamati (Bungoma) said their decision to support the Raila-Karua ticket was informed by the aspirations the duo have for the nation and their history fighting for change.

"I suppose all women should vote for Azimio for the presidency because we have a female deputy president candidate who brings the reform and gender mix in our camp. That is the opposite of our competitors in Kenya Kwanza, who look at our women differently," said Ongwae.

Raila iced the gender card cake by saying his government would create a fund for single mothers.

He regretted that the number of single mothers was growing to alarming levels, promising to give them money so that they could buy food for themselves and educate their children.

"We shall also create a fund to help our youth and women set up businesses. They will get loans from the funds and start repaying after seven years,” said Raila, adding those in the informal sector will be issued with government tenders.

"Azimio envisions a decent environment that will birth decent jobs for the youth and not that of consigning them to pushing wheelbarrows," he said.

Oparanya and Wangamati characterised Kenya Kwanza as a home of deceit, which is bent on taking the region's leaders, Moses Wetang'ula and Musalia Mudavadi, for a ride.

They cautioned the about 2.3 million Luhya voters they risk being consigned to the Opposition and miss out on government goodies.

"Our brothers in Kenya Kwanza have been promised 30 per cent share of Ruto's government if and when they deliver 70 per cent of the Luhya votes. Where will those (votes) come from when we've locked the region for Azimio?" Oparanya posed.

“We've been to Trans Nzoia, Kakamega and Busia and the reception was so overwhelming. Wetang'ula and Mudavadi have no chance."

Defence Cabinet Secretary Eugene Wamalwa promised to ''sweep the floor'' with Kenya Kwanza in the August polls, terming them non-reformists.

ODM secretary general Edwin Sifuna likened Ruto to a bull that promised to give Wetang'ula and Mudavadi milk.

"The promise that the duo finds 70 per cent of Luhya votes for them to get 30 per cent of Ruto's government is a fairy tale. Raila has given Wycliffe Oparanya the Treasury ministry and Kenneth Marende the Senate Speaker seat with no conditions," he said.

"We bagged Karua and she is causing seismic waves in the mountain voting bloc. If we get a good chunk of the (mountain) votes and already enjoy massive support in western, how will Kenya Kwanza beat us?" posed Kenneth.

Kenya Sevens poor show at the World Rugby Seven Series continued on Saturday at the London Sevens after two defeats saw them knocked out of the Main Cup quarterfinals.