Desperate farmers use detergents and pepper to fight army worms 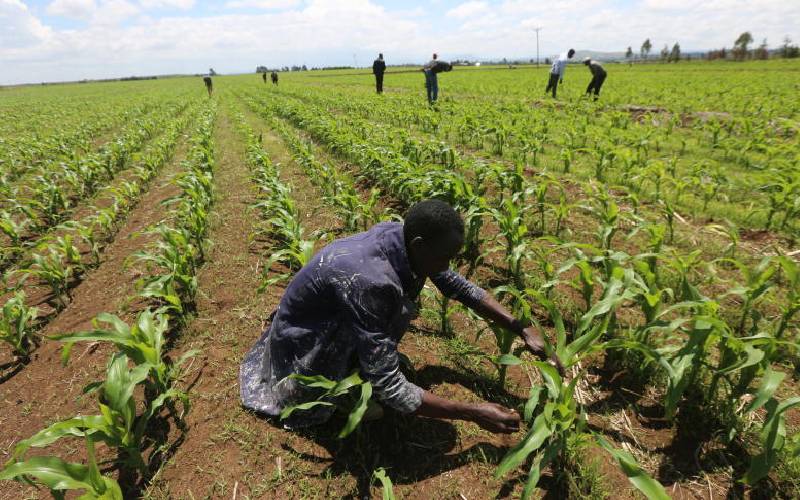 Maize farmers in parts of the North Rift are staring at huge losses as destructive fall armyworms invade their farms. The pests are destroying maize plantations in parts of West Pokot, Uasin Gishu and Nandi Counties.

Farmers who spoke to The Standard fear losing their investment following high cost of inputs that saw planting fertiliser hit Sh6,000 for a 50kg bag in the current season.

Some farmers said they took loans to meet high cost of inputs and that if the crop is destroyed, they will face more challenges repaying.

In West Pokot, the pests have been reported in Alale, Mnagei, Kapenguria, Siyoi and Chepararia wards. Farmers now appeal for assistance from authorities.

Mr Joseph Koduu from Lokitonyala lamented that large maize farms had been ravaged by the fall army worms.

Some desperate farmers have resorted to using soil, detergents and pepper to control the spread of the worms, but in vain.

“I don’t have money to buy insecticides to spray crops because I used the little I had to buy farm inputs. I have restored to putting soil on affected parts of the plants to block the worms from finishing whole plant,” said Mr Longora.

Mr Ariangiro Philip from Chepareria ward however said using soil or dust did not help much.

In Uasin Gishu, the pests have been reported in Sergoit and Kerendile areas in Moiben sub-County.

The Standard team found some farmers spaying their farms. Mr Adams Keitany, a farmer in Sergoit, appealed to the county and national governments to intervene before it is too late. “We urge the government to take immediate action since the worms spread so fast to other regions and might cause more harm. We need the Ministry of Agriculture to help and enlighten us on control measures or give us pesticides,” said Mr Keitany.

Mr Tony Rotich said more than 100 acres of maize locally had been infested by the worms. He said that despite the farmers rushing to spray the affected farms using common pesticides, the worms resurfaced.

“I have tried spraying my 20-acre maize farm, but the stubborn worms won’t die. Hundreds of them survive. The worms continue nipping the maize buds, and I am afraid I may not harvest anything,” said Mr Rotich.

We found Mr Fredrick Chebet spraying his farm. He said he was worried about the yields. “The worms move so fast. Last week we heard the same were spotted in Elgeyo Marakwet and here they are now. We fear they might spread to the rest of the county and even affect the neighbouring counties,” argued Mr Chebet.

“We have reports of isolated cases of attacks. It is not severe, and farmers who report are supported with pesticides and sprayers. The county has the control chemicals, and we urge farmers to report whenever they spot the insects,” said Mr Yego.

In Nandi County, Mr Henry Chumba, a maize farmer from Aldai, said the pests posed a menace annually, especially for the past five years.

“I opted to short-season crops like sorghum, millet and vegetables. Maize does not do well due to serious attacks,” stated Mr Chumba.

Mr Simeon Mutai, the County Director for Agriculture, confirmed that majority of farmers at risk of making losses were those who planted late.

He said reports of the warms’ invasion had prompted the county to supply more than 1,500 farmers with insecticides to mitigate the losses.

“The African army worms are different from the fall army worms and this type normally eats young green maize by destroying the leafy parts of the tender plant. It is the reason why most of the affected regions have friendly breeding environment for the worms,” he said.

Tracking and monitoring motor vehicles is not new to Kenyans. Competition to install affordable tracking devices is fierce but essential for fleet managers who receive reports online and track vehicles from the comfort of their desk.