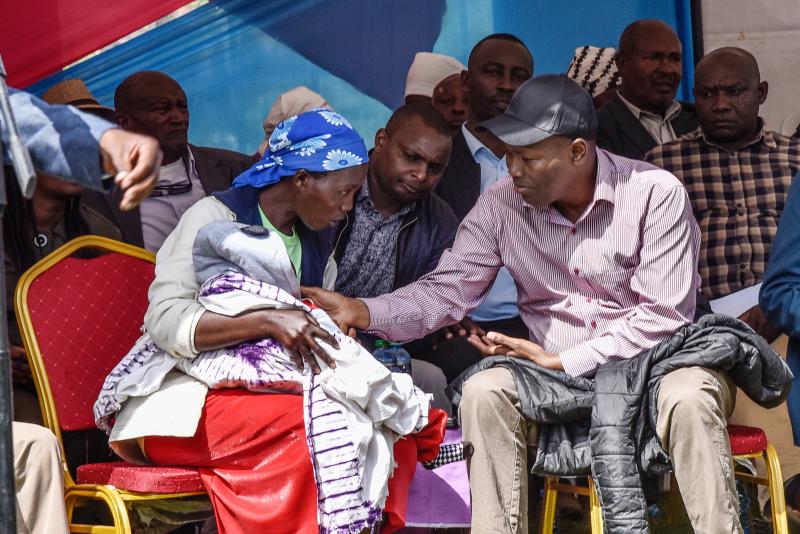 Nakuru Governor Lee Kinyanjui interacts with some of the Enoospukia evictees on May 25, who are currently living in Maella, Naivasha, during a meeting in the area. [Antony Gitonga, Standard]

Victims of the Enoospukia tribal clashes have a reason to smile after the government embarked on the process of vetting them ahead of their planned settlement after waiting for 30 years.

Those set to benefit are 1,000-odd families that were evicted from Narok in 1992 and temporarily resettled in Maella, Naivasha.

According to Nakuru Governor Lee Kinyanjui, the county had taken up the issue with the national government and the vetting exercise will start next week.

He said they will be working with 988 families who were evicted from the village in Narok at the height of post-election violence.

“The Enoospukia evictees have suffered for years and we are happy that the process of vetting them has started ahead of the planned resettlement,” he said in Maella,

The governor challenged KenGen to come up with a project in the area which borders Olkaria geothermal area. Kinyanjui lauded the power generation company for the construction of Sh331m outpatient wing at Naivasha sub-County hospital.

“We are grateful for the support from KenGen but we are asking for a modern school in Maella area which is also a source of geothermal energy,” he said.