ANSAR provides avenue to give back to communities

Calvin James, chair of the Local Organizing Committee for ANSAR 2018 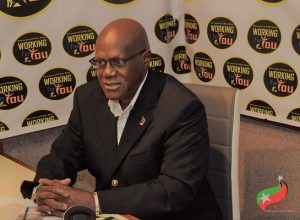 Calvin James, chair of the Local Organizing Committee for ANSAR 2018

ANSAR provides avenue to give back to communities

Basseterre, St. Kitts – The Anguilla, Nevis and St. Kitts Associations Reunion (ANSAR), which is being held in St. Kitts and Nevis, is not only a socializing event, but also provides an opportunity to give back to the people of the three countries, said Calvin James, chair of the Local Organizing Committee for ANSAR 2018, appearing on “Working for You” May 30.

The upcoming reunion, which will be held from June 22-24, is being hosted by the St. Kitts and Nevis Returning Nationals Association.

James explained that the association, which has been in existence since 1999, has been very instrumental in community and economic development in helping institutions such as schools, hospitals and giving donations to charitable organizations.

The ANSAR is as a non-profitable association that gives back to the community, he said. “I can recall in 2008, after the event in St. Kitts, we had contributed the profit toward Anguilla, Nevis and St. Kitts,” said James. “Everybody is primarily volunteers in the sense of giving back. I think this is something that is not being echoed; we do it quietly, but perhaps it is good for people to know some of the good things we have done.”

ANSAR has contributed to the National Children’s Home, constructed a ramp at the Cardin Home, donated hampers and given assistance to the senior citizens, presented an annual award to the best male student of the Clarence Fitzroy Bryant College (CFBC) and sponsored a student at CFBC to receive lunch for a year. The association has also donated 100 sheets and pillowcases the JN France General Hospital and Alexander Hospital, donated clocks, cooling fans, mats and other items to the Molineux hospital, provided lunch for a year for female inmates at Her Majesty’s Prison, donated tools to the male inmates at Her Majesty’s Prison and donated financial assistance to individuals in need.

“In the bigger picture, I believe [giving back] is an area where we want to reach out to everyone holistically,” said James. “We want them to understand that the returning nationals are here to work with the communities.’

This year’s event is being held under the theme “Renewing and Strengthening Our Relations, Celebrating Our Activities, Our Achievements and Uniting Our People.”

Кад Cadiz returned to La Liga after 14 years
Pioli about 2:2 with Napoli: One point is a good result
Gattuso on Milan's penalty: the Rule needs to change. Jumping with your hands behind your back is another sport
Milan will offer 25 million euros for Celtic defender Ayer
Klopp on plans: Four years at Liverpool. After that, I want to do nothing for a year
Rogers Pro 1:4 with Bournemouth: Leicester play well only 45 minutes after the break
Inter and Roma are Interested in Garay
Source http://www.thestkittsnevisobserver.com/local-news/ansar-provides-avenue-to-give-back-to-communities/

Costs of RUSVM Students Returning To St. Kitts Covered By the University Not the Government

RUSVM student’s costs covered by the university, not the government

Police Lineage Runs Deep In the Graduates of Course #44