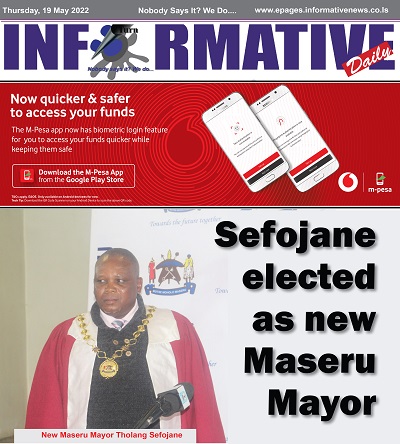 He succeeds the former Maseru Mayor Nthabeleng Ntšasa who officially stepped down at the same elections paving way for Sefojane to win an outright majority because he was not challenged in this polls.

“I appreciate the support and assignment from my fellow colleagues. With your support, I will reach all your visions and Maseru will never be the same again. I will fulfil all the assignments for the betterment of the nation,” Sefojane said when taking oath of the office.

The out-going Maseru Mayor congratulated Sefojane and welcomed him into office. She said it is her wish that Sefojane will take over from where she has left for continuation of the ongoing developments.

Meanwhile, Mabote Constituency Councilor Metsing Mothetsi said the councilors are expecting two things from him other than the mandate that he will be consigned by Maseru City Council (MCC)office. “Help us to work kindly with people in the constituencies through the assurance that Maseru, not only in town but even in its villages, will become lively with the existence of street lights and maintained roads,” he noted.

He said so far the out-going mayor has worked hard in her duties, and urged Sefojane to do the same and more.