US takes aim at Russia 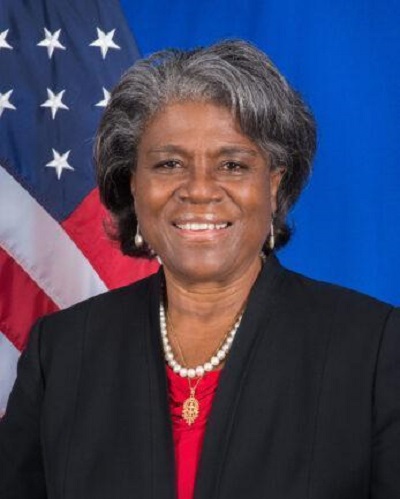 MASERU –  The United States (US) Representative to the United Nations (UN) Ambassador Linda Thomas-Greenfield has accused Russia of attacking its neigbour, Ukraine.

This she told the African based journalists during the virtual meeting on Tuesday this week ahead of her visit to Africa, where she will visit Ghana, Uganda and Cape Verde.

“And while food insecurity is a global crisis, you all know that it has hit Africa particularly hard. High energy prices, climate change – including severe droughts and floods- COVID-19, and increasing conflict have all combined to push millions of people to the brink.

“Putin’s illegal and immoral war of aggression in Ukraine has only added to this crisis-especially since some countries in Africa once got up to 75 percent of their wheat from Russia and Ukraine,” she said.

Russia-Ukraine war has been ravaging for months, plunging the world economies into food and fuel inflation since Ukraine is among the biggest producers of wheat and Russia is one of the biggest exporters of grain foods and energy.

The economists have since warned that if Russia does not agree to ceasefire, the food prices should be expected to soar.

The US Representative to the UN continued: “Let’s be clear. Russia attached Ukraine. Russia started this war. Everything that we’re going through right now related to Ukraine came about because of Russia’s decision to attack its neigbors  and to really kick the UN Charter in its back,” she charged.

She said all these factors contribute to what she called a “five-alarm emergency”,  highlighting the worst food security crisis she had come to see.

“And I’ve had a pretty long career.  People are starving, through no fault of their own, forcing some to travel long distances in the hope of finding humanitarian aid somewhere.  Food and oil prices are rising.  Malnutrition rates are soaring.  And children are dying.  The desperate situation makes conflict and violence even more likely; it becomes a vicious cycle that we have to stop now before it gets out of hand.”

She further detailed the US plans to address food security crisis, saying the US has been “proud to step up and lead the world in responding to this crisis, including through our efforts at the UN, through the Roadmap for Global Food Security”.

Meanwhile, last month the US President Joe Biden announced that he will host African leaders under the US-Africa Leaders Summit.

Some of the key issues that will receive attention in that forum are food security and climate change.

”I look forward to hosting leaders from across the African continent in Washington, DC on December 13-15, 2022, for the U.S.-Africa Leaders Summit. The Summit will demonstrate the United States’ enduring commitment to Africa, and will underscore the importance of U.S.-Africa relations and increased cooperation on shared global priorities.

“The U.S.-Africa Leaders Summit will build on our shared values to better foster new economic engagement; reinforce the U.S.-Africa commitment to democracy and human rights; mitigate the impact of COVID-19 and of future pandemics; work collaboratively to strengthen regional and global health; promote food security; advance peace and security; respond to the climate crisis and amplify diaspora ties,” he said.

Phamotse, 10 others reaffirm allegiance to RFP

I’ll rise above the challenges: Rantsó

US takes aim at Russia

﻿Only the sky is the limit for Kobeli