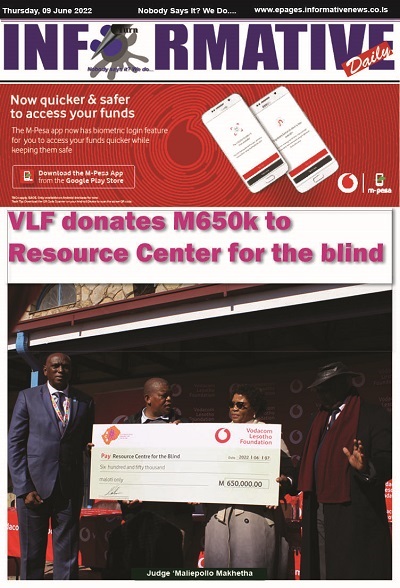 Vodacom Lesotho Foundation (VLF) has donated M650, 000 to St. Bernadette Resource Center for the Blind for purchasing of food and learning aids.

While exchanging her remarks, St. Bernadette Resource Center for the Blind Acting Principal ‘Mamoliehi Tamako mentioned that the center was introduced in 1971 beginning with only 30 children but has had about 80 children over the years. “The school accepts children from 6 years of age upwards and is open throughout the year. We teach them how to read and write using braille, how to take care of themselves and maintain hygiene. We offer reception classes, that is, grade 1 to 2 then when they go to grade 3 we hand them over to our colleagues at St. Bernadette Primary School, who teach them from grade 3 to grade 7,” she said.

Tamako also mentioned that they lack learning aids because they are not available in the country and are expensive, saying this setback hinders students from learning. She also said there is not enough space at the center for students as there is no other center that admits the visually impaired. She exchanged her vote of thanks to VLF for their contribution towards seeing that the children have adequate education, and everyone who has lend a helping hand in the center’s growth.

Vodacom Lesotho Foundation Board Chairman John Matlosa stated that their mandate is to lend a helping hand in education, Gender equality, economic growth and health developments. He said the teachers are doing a great job in seeing that those children are well taken care of and fed. He mentioned that their responsibility as VCL is to support those teachers. He also said he hopes the center will spread across the country and reach all the visually impaired children across the country. Matlosa further said every Mosotho can support the center with the little that they have and not just rely on cooperatives.

On behalf of Ministry of Education and Training (MoET) Principal Secretary, MoET Chief Executive Officer (CEO) ‘Mabakubung Seutloali highlighted that the Government of Lesotho recognizes education as a right and therefore, children with disabilities should not be denied the right to education. “The government also commits to the local and international conventions of people with disabilities such as Education Act of 2010, Disability Equity Act 2021, Inclusive Education Policy 2018 and Sustainable Development Goal 4 just to mention a few,” she noted.

She concluded that MoET is working towards achieving SDG4 by 2030 and building on the principle of leaving no one behind through the inclusive schools and special schools such as St. Bernadette Resource Center for the Blind. She said the ministry supports initiatives on different types of disabilities including hearing impairment, visual impairment, physical impairment and intellectual disabilities.